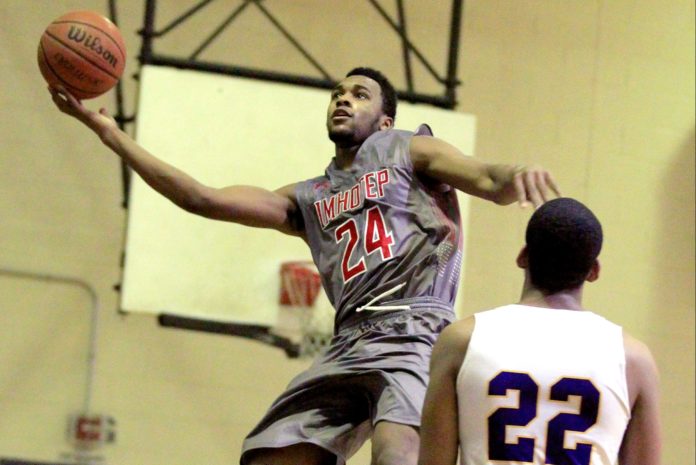 The first semi-final of the evening featured perennial national power Oak Hill taking on another highly regarded national team in Imhotep Charter out of Philadelphia.  Oak Hill was actually a bit short handed as 6’11 center Kofi Cockburn was serving a suspension and 6’6 senior forward Christian Brown had a quad taped up as well as parts of both hands.  Imhotep wasn’t whole either as 6’5 senior Dahmir Bishop was out after injuring an ankle earlier in the event.  Still, the game must go on.

In a shock, Imhotep was completely dominant in the first quarter.  They outscored the Warriors 15-4, thanks in large part to seven points from Jamil Riggins and six points from Donta Scott.  A bucket each from Cole Anthony and Cam Thomas was all Oak Hill could muster.

It did not get better for Oak Hill in the second period.  Imhotep continued to pull away, outscoring the Warriors 9-4 to open up a 24-8 lead with 4:16 to play in the quarter.  Oak Hill finally reached double digits on a pair of free throws from Thomas but Imhotep was just relentless!  By the end of the half, Imhotep was up twenty on the #2 team in the country, 35-15, leaving a capacity arena stunned.

Anthony scored on a drive to open the third period but it didn’t rattle Imhotep.  They went on an 8-0 run to make the score 43-17 with 5:36 to play.  That’s only nine points away from Florida’s running clock rule.  At that point, Oak Hill got down to business.  They started taking better care of the ball, making shots, and more importantly, forcing turnovers with a full court press.  Over the remainder of the quarter, Oak Hill outscored Imhotep 19-8 to cut the deficit to fifteen at 51-36 going into the final period of play.

Oak Hill continued to take advantage of Imhotep’s shakiness against the press and worked its way back into the ball game.  With 3:32 left to play, the margin was only nine at 60-51.  Four consecutive free throws from the Warriors made it a five point game at 60-55 with just under three minutes to play.  Now the crowd was getting into it, some wanting the big upset for Imhotep and some wanting the big comeback for Oak Hill.  From that point on, Imhotep would score eight of their next ten points from the foul line and Oak Hill would get no closer.  Imhotep heads into tomorrow’s title game with a big win over Oak Hill by the score of 70-60.

For Oak Hill, Cole Anthony had a game high 33 points, sixteen from the foul line.  Thomas added 17 points before fouling out midway thru the final period.