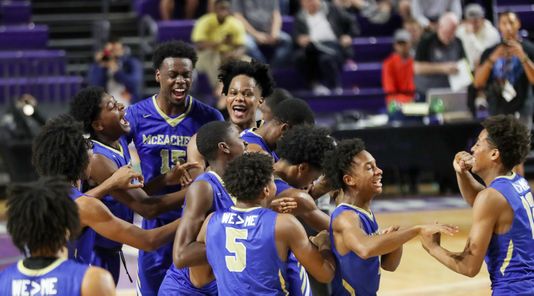 Two of the very best teams in the South faced off to reach the title game with McEachern out of Georgia taking on Mountain Brook out of Alabama.  McEachern had a day of rest while Mountain Brook expended a lot of energy in defeating arguably the most talented team in the field in IMG Academy the previous night.

McEachern got out of the gate quickly and led 7-2 after a three from Sharife Cooper at the 5:49 mark.  Mountain Brook tied it up after a driving score from Tristan Watford and a bucket inside and a three from Lior Berman.  Mountain Brook would take a lead of 9-7 after a steal and score by Alex Washington but that was short lived.  Isaac Okoro scored on a drive to tie the game then a three from Alyn Breed and a transition basket from Okoro gave McEachern a 14-9 lead after one quarter of play.

The second quarter was all McEachern as Mountain Brook seemed to be playing on heavy legs and McEachern’s ability to double on Watford and then rotate without giving up easy shots was making an impact.  They scored only four points in the period.  However, Mountain Brook’s defense was still solid and McEachern could not completely pull away.  Cooper hit a half-court shot just before the halftime horn to give his team a double digit lead at 25-13.

In third period, McEachern’s defense continued to keep Mountain Brook at bay.  It was another measley four point period for the men from Alabama.  One would have thought that McEachern could have pushed the pace and gotten easy scores but they seemed content to rest on offense and bide their time.  After three quarters of play, the score was 32-17. While a fifteen point lead doesn’t seem insurmountable, it also seemed like a lot to ask of Mountain Brook to essentially score more points in the fourth than they have all game to make a run to win the contest.

That definitely didn’t happen.  McEachern built the lead to twenty at 37-17 and essentially coasted from there.  They would go on to win by the score of 50-29.

Cooper led McEachern with 15 points while Okoro added 12 points and Jared Jones tallied 11 points to go along with 14 rebounds.

Both Berman and Washington of Mountain Brook scored eight points.  Watford was held to just four points but did have eleven rebounds.