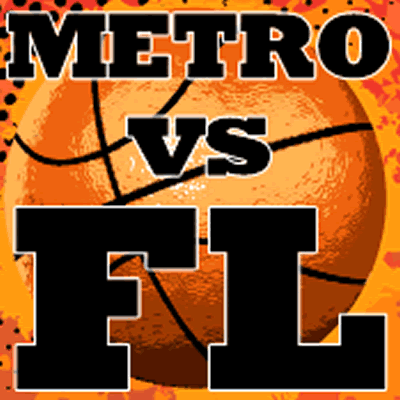 We got to Apopka High School midway thru the first day of the Earl Graham Metro vs. Florida Challenge.  The event was re-branded to reflect the impact on the community that Graham had as a youth basketball coach and mentor.

Santa Fe came into the contest missing four players, most importantly 6’7 junior Harvey Wilson.  Even if that quartet had been available, the team still would have been at a physical disadvantage.  Despite that, Santa Fe put up a tough fight early on.  Oak Ridge scored the first five points of the contest with Fabio Basili scoring at the rim and Jalen Reece connecting on a three.  Santa Fe hit a three to get on the board and midway thru the quarter, the score was only 5-3 in favor of the Pioneers.  Both teams converted three point plays to make the score 8-6.  At that point, Oak Ridge ripped off a 10-0 run to end the quarter up 18-6.

The second and third periods only extended the Oak Ridge lead.  The Pioneers led by scores of 36-13 at the half and 64-35 after three quarters of play.  The running clock finally kicked in with three minutes left in the final quarter with Oak Ridge up 78-43.  The final score would be 84-47.

Oak Ridge was led by Tyler Johnson with 14 points while Basili, Reece, and Elijah Elliott each logged 13 points.

Two of the best teams and four of the best players in the state took the stage for a big-time match-up on opening night.  Mississippi State signee Riley Kugel started off the night with a drive and dunk for DP.  Brice Sensabaugh answered with a put back to put the Highlanders on the board.  Another dunk by Kugel broke the tie but LHP then ripped off six straight points to lead 8-4 midway thru the period.  Threes by Sensabugh and Kellan Lewis keyed that run.  DP responded but trailed after the first quarter 12-11.

The teams continued to go back and forth on the scoreboard and midway thru the second quarter LHP led by two at 19-17.  After a three from Sensabaugh pushed the LHP lead to five, DP got a dunk from Mason Sheffield, and two more dunks from Kugle gave DP a 23-22 lead.  A putback by Jah Quinones of Lake Highland put them back in the lead but a bucket inside from Carter McDole gave DP the lead at the break 25-24.

DP caught fire to open the third quarter.  Jordan Tillery scored inside, Denzel Aberdeen connected on a drive and Ernest Udeh put back a miss to lead 31-24 and with just two minutes gone, forcing Lake Highland Prep to take a timeout.  A transition basket by Riley made it a nine-point DP lead but Sensabaugh finally got LHP on the board with a three.  Sensabaugh hit another three after a DP bucket to get to within five, but DP pushed their margin to eleven with another 6-0 run, culminated by a three from Kugel.  Sensabaugh answered with a personal 5-0 run to get back to within six at 41-35.  Aberdeen scored on a drive to make the margin eight but a bucket inside by Jared Berry and a three to beat the buzzer by Lewis to get LHP to within three, 43-40 heading into the final quarter.

Udeh hit two free throws for DP to open the fourth but LHP answered with a driving bucket.  The teams would trade baskets and with four minutes left to play Dr. Phillips led by just one at 52-51.  Tillery of DP slammed home a lob.  A pair of free throws from Berry and a three-point play from Sensabaugh gave the Highlanders back the lead at 56-54.  Kugel hit one of two free throws to get within one but Lake Highland answered with a basket inside to make the score 58-55 with 1:17 to play.  Aberdeen scored on a drive to get back to within a bucket.  After a Lake Highland miss, Tillery scored on the break with forty seconds left to give DP a 59-58 lead.  A turnover and foul by LHP sent Aberdeen to the line for two shots and a chance to put away the game with 22 seconds left.  He made one of two and LHP still had life.  Sensabaugh got the ball on the right wing and with a defender draped all over him, nailed a three to go up one at 61-60.  DP called timeout with six seconds left, plenty of time to get to the basket and score, draw a foul or both to win the game.  DP got to the rim but the shot was off and no foul was assessed.  Lake Highland Prep grabbed the rebound and the Highlanders celebrated an exciting 61-60 victory.

LHP was led by Sensabaugh with 39 points going a blistering 14-22 from the field.  Quinones added  points.

DP was paced by Aberdeen with 20 points while Kugel finished with 18 points.

Edgewater is a very young team that started two freshmen, a sophomore, and a junior.  Meanwhile, Seminole was missing a sizable portion of players as they are still in the football playoffs.  It was a very furious first four minutes of the opening quarter as both teams got the shots they wanted.  With a four minutes gone by, Seminole led by just one at 11-10.  At that point, Seminole took over, outscoring the Eagles 12-4 to lead by nine, 23-14 going into the second quarter.

By the midway point of the second period, Seminole had doubled up Edgewater, leading 30-15.  Seminole used it height advantage to dominate the glass and get out in transition.  Edgewater was able to calm down and get back into the game, but at the half still trailed by a dozen at 35-23

The opening portion of the third quarter was all Edgewater.  They came out attacking and got to within two, 39-37 with four minutes left in the period.  Seminole was able to maintain the lead up until Jaylen Smith hit a mid-range jumper to tie the game at 47-47 heading into the final period.

Edgewater grabbed the lead on their first possession of the quarter but couldn’t maintain any momentum.  Seminole unleashed a full-court press, forced some turnovers, and got easy baskets to retake the lead.  Edgewater made some mistakes late that a more veteran team would not and Seminole took advantage.  In the end, Seminole would take home a 76-68 victory.

Edgewater was paced by Darius Washington III with 17 points while both Smith and Erik Taylor each added eleven points.

Other Notable Performances from Day One