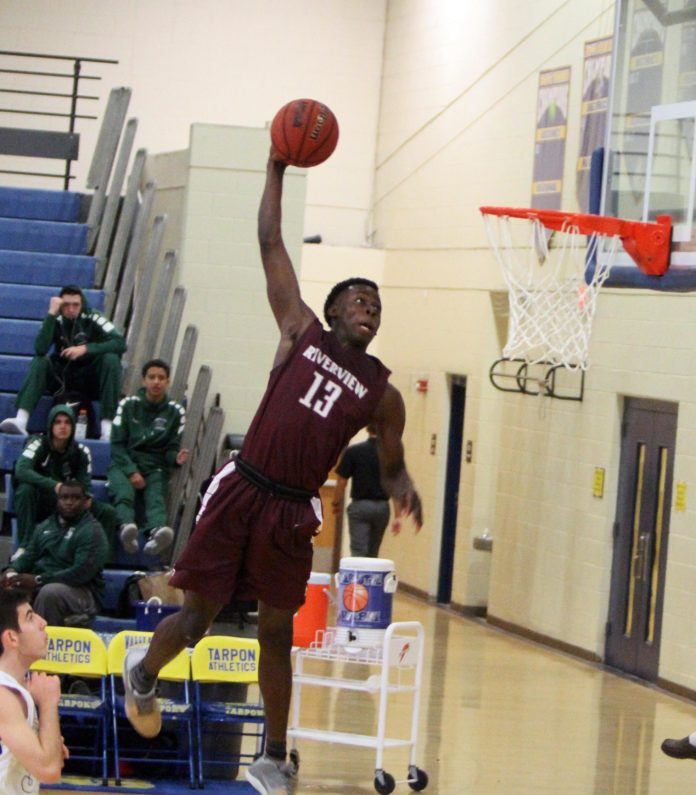 We ventured down to Punta Gorda in Southwest Florida for the Saturday festivities of the Wally Keller Classic held at Charlotte High School.  One of the great draws of the tournament (beside the extraordinary hospitality room) is that it pits high level teams from across the state and not just a series of “local vs. local” contests.

This game was attractive from the standpoint that both programs represent their communities well and each play incredibly hard at both ends of the floor.  Despite Bartow’s youth (only one senior on the roster and they start two sophs and a freshman), it was the Yellow Jackets that jumped on top early.  They had a 10-3 lead midway thru the first period and stretched it out to 19-5 by the end of the first eight minutes.

Lehigh didn’t panic and reversed the script in the second quarter.  The Lightning scored seven unanswered points by the five-minute mark to get within 19-12.  By the time halftime rolled around, Lehigh was back in the game at 25-20.

Bartow again got out of the gates fast at the start of the third period and stretched its lead to ten, 37-27, midway thru the quarter.  Lehigh bounced back quicker this time and got to within five as the period was coming to a close.  However, Bartow hit a late three to push the lead back to eight at 43-35 heading into the final period.

That final period was all Yellow Jackets as Bartow led by fourteen mid-way thru the fourth and had a 61-41 lead with just over one minute to play.  The final score would ultimately be 65-48 in favor of a young, scrappy Bartow squad.

Lehigh was paced by 6’4 junior Quinton Desamours and his 18 points.

If you walked into the gym without knowing anything about the two teams, you would be struck by the difference in size as Hillsborough is one of the bigger teams in the state this season.  However, they didn’t take advantage of the size early on and Evangelical was able to keep them in check thru a somewhat sluggish first quarter.  The score was only 4-2 in favor of Evangelical after four minutes.  Hillsborough come back with a 7-1 run to lead 9-5 at the end of the quarter.

Evangelical tied the game at nine before the first minute of the second quarter had elapsed.  From there the pace quickened and both teams found a bit of rhythm.  However, some late turnovers led to easy baskets for Hillsborough and the Terriers finished the half up five at 23-18.

Hillsborough maintained a steady lead throughout the third period and led by the score of 37-29 going into the final quarter.  Evangelical started off the fourth well, getting to within 38-34 and seizing momentum.  However, Hillsborough’s Christian De Leon scored six straight points and the lead grew to ten at 44-34 with four minutes left.  Evangelical was unable to make another run and Hillsborough would eventually extend their lead and win by fifteen, 59-44.

De Leon led all scorers with 24 points for Hillsborough while Evangelical was led by Dylan McDaniels with 12 points.

After seeing both Booker and South Miami previously, we looked forward to this contest with the expectations of a very competitive game.

Booker surprised South Miami with an active half-court trap and it pushed the Tornadoes to an early lead that they held throughout the first quarter.  The Cobras struggled with their three-point shooting but Booker wasn’t able to take advantage of that and stretch out their lead.  With four minutes gone in the second quarter, Booker only led by five at 19-14.  South Miami got to within 19-18 but Booker hit a three to push up the margin.  The Cobras eventually took their first lead of the contest at 24-23 with forty-five seconds left in the half, but Booker knocked down a three just before the horn and took a 26-24 lead into the break.

The third quarter was a back-and-forth affair with the lead changing hands or the score tied on seemingly each possession.  It looked like South Miami might seize control of the game after building a 46-40 lead with just over a minute to play in the third after taking advantage of some Booker turnovers.  However, when the end of the quarter came around, the Cobras only led by two at 46-44.

The game remained tight all the way through the final period.  With 2:30 to play, the score was tied at fifty all.  With two minutes to play, South Miami connected on one of two free throws for a one-point advantage.  Booker answered with a mid-range jumper to grab the lead right back.  At that point, both teams mysteriously took bad shots or turned the ball over.  With under thirty seconds to play, Booker attempted to hold the ball with a one-point lead.  South Miami was forced to foul, and Booker hit two free throws to make it a 54-51 score.  South Miami got a good look at a three but it didn’t fall.  Booker tacked on one more free throw before time expired to win a tough one by the score of 55-51.

Jordan Clark paced Booker with 19 points, ten of those coming in the final quarter.  King Winkfield joined him in double figures with 10 points.

A game between two legitimate state title contenders in Class 9A, it was Palmetto that got out to an early lead but led by just one point at 10-9 midway thru the opening quarter.  Riverview was able to turn the tables at that point and took a 20-16 lead into the second quarter.  It didn’t take long for Riverview to extend their advantage to double-digits in the period. Eventually they would go up by fourteen at 36-22 at the break.

Palmetto fought back to get into the contest in the third period and got to within nine midway thru before finding themselves down by eleven with one quarter left to play.  However, Riverview opened the fourth quarter with an 8-2 run, pushing their advantage to 59-41 with six minutes left in the contest.  Palmetto got some stellar shooting from beyond the arc late but it wasn’t enough to erase the deficit.  Riverview would go on to win by the score of 73-62.

Riverview was led by Malachi Wideman (pictured) with 18 points, followed by Jayven Millien with 12 points and Tyrus Jackson with 11 points.

In the final game of the night, host school Charlotte took on independent power Oldsmar Christian.  Both teams had tough games the previous night to kick off the event, so it was a short turnaround to face a quality opponent for each squad.

Oldsmar jumped on top early in the first period but the homestanding Tarpons got the margin down to just two at 14-12 to end the first quarter.  In the next period, Oldsmar grabbed momentum early and built a nine -point 29-20 lead at the midway point.  Charlotte closed to within six, 31-25, by halftime.

Oldsmar continued to keep a tight grip on their lead and at the four-minute mark of the third they led 33-26.  At that point however, Oldsmar’s leading scorer Jadrien Tracey picked up his third foul and headed to the sideline.  This opened the door for Charlotte as they went on a 10-4 run to get to within one at 37-36 with just a few seconds left in the period.  Oldsmar was able to add a free throw before the end of quarter number three to hold a slim 38-36 lead going into the final quarter of play.

Charlotte cut their deficit to one at 40-39 but a three from Oldsmar’s Braxton Bartlett and two free throws from Tracey pushed Oldsmar’s lead back to six at 45-39 with 4:20 left in the contest.  The Tarpons were unfazed and made things very exciting as they got to within 51-49 with 1:15 left to play.  With forty seconds left, sophomore Tre Carroll converted inside to tie the game at fifty-one.  After a miscue by Oldsmar, Charlotte’s Ahmad Johnson converted one of two free throws to give the Tarpons a 52-51 lead with six seconds remaining.  Oldsmar took a timeout to set up a final play.  They got the ball inbounds and rushed it up the right sideline.  Tracey got the ball in the corner and without hesitation fired a three just before the horn went off.  It dropped thru the net as the horn was echoing throughout the gym, leaving the crowed stunned and giving Oldsmar a 54-52 victory.

For Charlotte, Johnson led the way with 19 points while Carroll finished with 12 points.