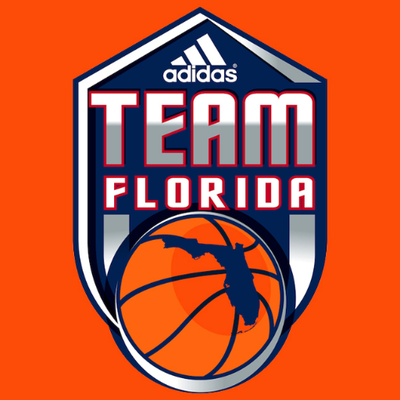 Team Florida plays on the Adidas Gauntlet Gold circuit.  We caught up with Head Coach B.J. Ivey to get insight on this year’s team.

“This group has shown some good chemistry early on”, Ivey said.  “The players have a ‘we, not me’ attitude and it really shows on the court.  They understand that playing the right way means putting in great effort on the defensive end and offensively have sound ball and player movement.  It’s a great group to coach.”

Team Florida brings a good bit of size to the court.  Andre Weir, a 6’10 junior at Hollywood Chaminade is the tallest of the group.  Other players seeing time on the interior will be 6’8 junior Johni Broome from Tampa Catholic, 6’7 junior Lenzy Hancock from Jacksonville University Christian, 6’7 junior Johnny O’Neil from Hollywood Chaminade and 6’7 sophomore Tre Carroll from Punta Gorda Charlotte.

“Weir has good footwork in the post, soft hands, and a nice touch around the basket”, Ivey said.  “He’s got a big, strong frame and knows how to use it to create space.  Broome is young for his class but is quite skilled in the fundamentals of post play.  He can score out to 15-18 feet and defensively does a good job of protecting the basket.  Hancock is a deceptively athletic combo forward.  He’s strong, skilled, and can play inside and out.  O’Neil shoots the ball well from the perimeter and battles inside.  He gets better every time he steps on the court.  Carroll is playing up.  He has the skills to score from all three levels.  He also plays with a great motor and has high-major potential.”

The backcourt should be solid as well for Team Florida.  Bradley Douglas, a 6’2 junior from Eustis, will joined on the perimeter by 6’1 junior Keon Buckley from Bradenton Lakewood Ranch, 6’4 junior Zach Mobley from Sarasota Riverview, 6’1 junior Keegan Karnes from Tampa Berkeley Prep, and 6’6 junior Christian Shaneyfeldt, also from Lakewood Ranch.

“Douglas is a fierce competitor”, Ivey states.  “He plays with an edge, scores thru traffic and is a solid on-ball defender.  Buckley is a combo guard that is a good facilitator and has consistent range to the arc.  He does a good job of making plays in the lane when penetrating the defense off the dribble.  Mobley brings the intangibles that win games.  He’s a capable shooter, gets open teammates the ball quickly, and plays with aggression and energy.  Karnes is a knock-down shooter with great range.  He’s smart with the ball and makes good decisions.  Shaneyfeldt is a wing that can play inside or out.  He is a good athlete with size, very good in the open floor, and is a guy that can defend out on the perimeter or in the paint.”