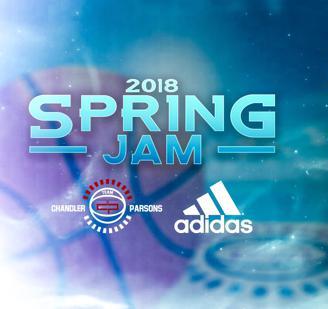 Victor Brown, a 6’2 wing from Orlando Lake Highland Prep, spent time with both the Gauntlet and Select teams on Saturday, but we saw him with the Gauntlet squad.  A good athlete, he excelled in the up-tempo game, scoring thru contact in transition, getting to the offensive glass and converting, as well using a quick first step to attack the defense.

Bradley Douglas, a 6’2 guard from Eustis, seemingly plays better with every viewing.  A strong and solid lead guard, his improved perimeter shooting makes him a tough cover as the defense can no longer simply lay back.  When attacking the rim, he uses his strength to power thru defenders and contact to score and/or earn trips to the foul line.  Douglas is also a solid defender and brings a definite sense of swagger and toughness when he steps on the court.

Eric Canavan, a 6’6 forward from Windermere, simply gets things done.  He does two things quite well: plays hard and performs his role as well as possible.  His effort leads to production and it’s hard to ask for more than that.  A rebounder deluxe, if Canavan can get a hand on it, the basketball is usually his.  He scores well around the basket, off of offensive rebounds, and quick dives into the lane.

Michael Eads, a 6’3 guard from Orlando Edgewater, was a jack of all trades on Saturday.  Seemingly always around the ball, Eads has a knack for scoring from all three levels, is a crafty offensive rebounder, and sneaky defender that comes up with a lot of tips and steals.  He doesn’t come off as extraordinarily quick or athletically explosive, but he routinely scores and makes plays game in and game out.

John Mogbo, a 6’3 guard from West Palm Beach Cardinal Newman, made quite an impression in our first viewing of him.  Thin and long, he’s a versatile defender.  A shooter with range, Mogbo has a quick release and made shots off both the bounce as well as the catch.  He also finished well in transition.

Jace Howard, a 6’6 wing from Miami Gulliver Prep, has certainly learned a great deal of basketball from his NBA father.  Jace is much different from his dad in that he’s a skilled perimeter player that can play multiple positions.  He sees the floor and passes the ball well, has a respectable shot to the three point line, and works the glass at both ends of the court.

Brandon Garcia, a 6’1 guard out of Weston Cypress Bay, is a relatively new addition to the team and appears to be a difference maker.  Aggressive, shifty and confident with the basketball, he rarely switches from attack mode.  Garcia gets to the rim and finishes in traffic but also makes good pass vs. shot reads when attacking the basket.  He gets to the line quite frequently and is also a solid shooter when open.

Tony Sanders, a 6’6 wing from Miami Gulliver Prep, is a shooter with size and length.  He shoots over most defenders and many of the players his size that attempt to guard him aren’t quick enough to stay with him.  Sanders is also a better passer than he gets credit for.

Sam Rolle, a 5’10 point guard from Riviera Beach Suncoast, was a catalyst for the team during Saturday’s action.  Facing other guards of comparable size and quickness, Rolle routinely got by them, collapsed the defense, and found teammates for easy baskets.  A solid point guard with vision and creativity, he comes across as tough-minded, a solid defender, and a guy that makes his teammates better.

Jaquan Gatlin, a 6’7 forward from Boca Raton Saint John Paull II, had a solid game Saturday afternoon.  With long arms and a solid frame, he was a tough matchup at both ends of the floor.  While he made his lone three point attempt of the contest, he was most productive when working from inside out.

Eathen Williams, a 5’10 ninth grader from Orlando West Oaks, played up and acquitted himself well.  He shot the ball from behind the three point line.  Williams also was quick with the ball and showed solid handles.

John Peden, a 6’5 forward from Tallahassee Rickards, was a presence inside for the team.  The lefty worked hard around the basket and showed a good touch out to fifteen feet.

Calvin Johnson, a 6’4 combo forward out of Jacksonville Impact Christian, started a bit slow in the morning game we took in but got better as the game wore on.  The lanky slasher appears to be at his best when he can get out in transition and beat the defense down the court or attack the basket with a few dribbles from inside the arc.  Johnson’s length allows him to be a disruptive defender and active rebounder.

Makai Willis, a 6’6 forward from Tallahassee Florida HS, seems to be progressing well as he works on making the transition from the post to playing on the perimeter.  He looks comfortable playing while facing the basket, has decent form on his shot and is an effective straight-line driver.  Willis is still a productive scorer in the lane when he gets the ball inside as well as a rugged rebounder.

Rashad Parms, a 6’5 forward from Miami Carol City, had a good first year for his high school squad so it wasn’t a surprise to seem him perform well on Saturday.  Right now he’s a bit undersized at the four spot but his long arms, strong frame, and solid athleticism allow him to play bigger.  He got most of his points around the basket but he knocked down a couple of perimeter jumpers on Saturday and looked good doing so.  If he’s able to make the transition to playing full time on the perimeter, his stock will certainly go up.

John Renoit, a 5’11 point guard from Somerset Pines Charter, is one to watch for in the 2021 Class.  While his overall speed, quickness, and athleticism give him an advantage, we came away impressed with his leaderships qualities and basketball IQ.  He made good reads coming off of ball screens, found open teammates for good looks at the basket on drives, and continuously kept his teammates moving in the right direction.