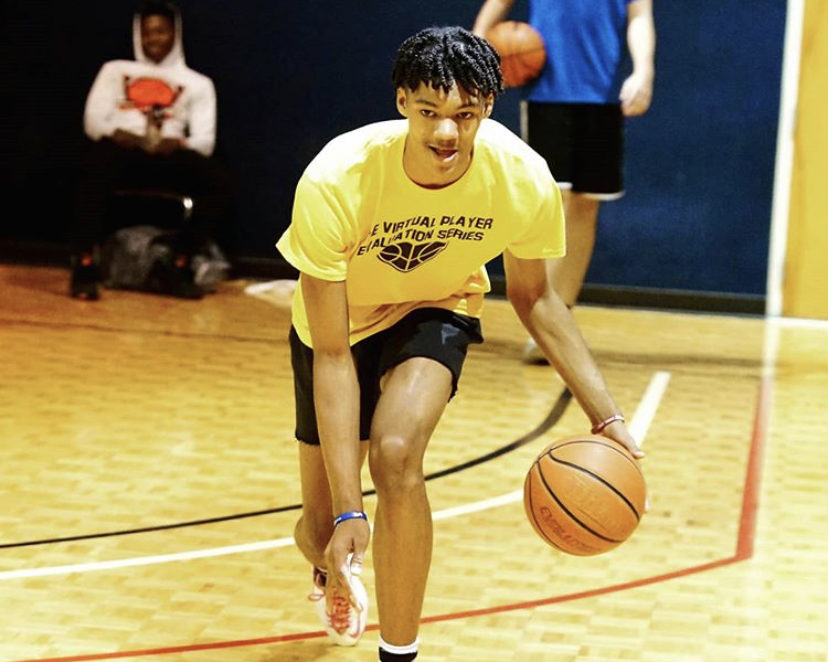 Carroll continues to elevate his game in various ways.  On Saturday, the 6’8 rising senior out of Punta Gorda Charlotte took on the role of facilitator.  Using his size, court vision, and instincts, Carroll got the most out of himself and his teammates.  His success rate from behind the three point line continues to improve as does his ability to put the ball on the floor and score at the rim.  While Carroll may not always win his matchup on an athletic basis, he usually has the edge when it comes to skills and savvy.  His game can translate to wither a  stretch four or point forward at the next level.

The 6’6 rising senior has put in work at each of the three VPES events and Saturday was his best performance.  Draper does a little bit of everything on the floor and embodies today’s concept of position-less basketball.  A good ball-handler and passer, Draper has a high basketball IQ and makes good decisions regardless of the game’s tempo.  Unlike many players at this stage of development, Draper impacts the game without relying on his perimeter shot going down.  On Saturday he scored well going to the basket and made what few outside shots he took.

The 6’3 senior got off to a fast start on Saturday, dropping in a pair of shots from beyond the arc before the five on five session was a couple of minutes old.  The defense adjusted and so did Hines, as he got past defenders that closed-out improperly to get to the basket and either score or take a trip to the free throw line.  Hines was also active on the offensive glass and at the defensive end.  He has active hands and feet, anticipates well, and does a good job of staying front of the ball.

The 6’5 rising senior lived up to his name in his first appearance in the VPES.  Battle played extremely hard at both ends of the court and competed on every play.  He impressed with his ability to score inside the arc as was able to create and make mid-range jumpers or get to the basket quickly to finish strong in traffic.  He competes well on the glass against bigger players thanks to his strength and relentless attitude.  While not a point guard, Battle does a good job of taking care of the ball and making good decisions with it.

The 6’7 rising senior was the only one of the ten players in Session Five to have played in any of the previous sessions.  Consequently, he was more in sync with the game and therefore more productive.  In our previous viewings we have shared concerns about his perimeter shot but this time around he was able to find his target with greater consistency.  Thankfully, he didn’t settle for perimeter shots and again showed that he is best at attacking with a few dribbles to score at the rim.  Washington also showed some better passing instincts and seemed more comfortable out on the perimeter this weekend.

Tyrone Baker (Fort Myers Riverdale): The 6’9 rising senior at Fort Myers Riverdale continues to elevate his recruiting stock with his performances at the VPES.  Whether displaying playmaking skills, scoring from different levels, or controlling the paint, Baker is a presence to be accounted for on every possession at each end of the floor.

Walter Clayton (Bartow): The 6’3 rising senior is what one would call a “master manipulator” in that he is able to move the defense with his dribble to set up his teammates.  Most of his points came on drives this time around but Clayton did show off deeper than expected range from the perimeter.  He has to be considered one of, if not the, top point guards in Florida’s 2021 class.

Alex Fudge (Jacksonville Lee): The 6’8 wing is considered a national top fifty recruit by most scouting services and that certainly hasn’t changed in his three performance at the VPES.  His improved shooting stroke is arguably what stands out the most since we saw him play during the high school season.  Fudge still gets most of points via short dribble drives, lobs or in transition.  His wing span and quick leap make him a problem at the defensive end and the rebounding department.

Kanye Jones (Windermere): The 6’3 rising senior shot the ball very well (4-7 from beyond the arc) from deep on Saturday, which wasn’t surprising.  He is a good athlete and uses that to win rebounding wars against bigger players.  He has the quickness and ball-skills to be an effective slasher but that sometimes gets overlooked when his perimeter shots fall at a high rate.

Riley Kugel (Orlando Dr. Phillips): While his shot didn’t fall at as a high a rate as it did the previous week in Orlando, the 6’5 rising junior still makes a big impact with passing skills and pursuit of rebounds.  His size allows him to see over and survey the defense, allowing Kugel to make good decisions with the ball on the move.

Kjei Parker (Bartow): Just a rising sophomore, the 6’2 Parker was impressive on Saturday.  He has a solid frame and high basketball IQ for a young player.  He appeared to be a solid ball-handler and passer.  Parker’s shot has good form but lacks consistency at this stage.

Kenny Turner (Boca Raton St. Andrew’s School): The 6’6 rising senior will be key in getting St. Andrew’s back to Lakeland to defend their 3A state title.  While he did make a three pointer, most of Turner’s points came in transition.  What stood out was Turner’s tenacity.  He’s strong, active, rebounds, runs the floor and plays hard every possession.

Parker Sasser (Hardee): The 6’9 rising senior plays in a relatively unpopulated portion of the state, so he was definitely a fresh face.  Sasser was arguably the surprise of the day.  A good but not great athlete, he played hard, controlled his rebounding area, displayed a couple of nice post moves and proved he could step out and make shots to fifteen feet.

Galen Washington (Bradenton Southeast): The 6’0 senior made the most of his opportunities on Saturday.  He knocked down a couple of shots from beyond the arc and made good decisions with the ball on the move. His play made us want to see more.

Deon Brown (Tampa Bayshore Christian): The 6’3 rising senior shot the ball well from deep (5-9) during five on five play.  His range is well past the high school three point line.  Brown also proved to be a solid ball-handler.

Isaiah Hernandez (Poinciana): The 6’9 rising junior has a good body, plays hard, and is active at both ends of the floor.  He relentlessly pursued offensive rebounds and surprised a bit as a passer on the perimeter.  We would have preferred he focused on interior scoring during the scrimmage as his perimeter shooting was well off-target.

Maleek Huggins (Bradenton Southeast): The 5’11 rising senior was another player that shot well from distance on Saturday.  He is quite quick with the ball and gets it quickly to open shooters.

Tyler Williams (Winter Haven): A 6’4 rising sophomore, Williams plays with poise and confidence.  He has a good frame with some strength.  While he didn’t shoot the ball all that well during the scrimmage, he proved to be a solid ball-handler and passer as well as rebounder.  The shot has good form so consistency should come in time.

Miles Stewart (Orlando Lake Highland Prep): The 6’7 rising senior is more of a perimeter player and is a potent three point shooter.  Stewart has some length to him, and that makes him a factor when going after rebounds at either end of the floor or defending out on the perimeter.

Jonah Pierce (Winter Park Lake Howell): The 6’7 rising senior filled his role as an interior scorer and rebounder Saturday.  He quietly reached double figures in points and nearly got there with rebounds.  With added strength, he will get more athletic and arguably make a greater impact on the floor.

Ryker Vance (Community School of Naples): The 6’6 rising senior was all business and produced quietly but efficiently.  He opened up the game with a three but the rest of his scoring came on put-backs and in transition.  Vance was an avid rebounder and also got in a couple of blocked shots.