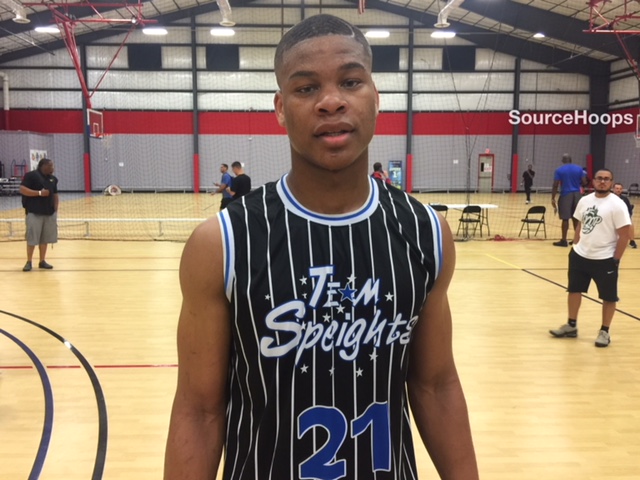 More from the Summer Hoops Festival.

The EYBL powerhouse played a pair of games on Wednesday night before heading north for an event in the ATL.  A large contingent of coaches was on hand for each game, many to see C.J. Walker.  The 6’8 forward had a tremendous first live period and continued that level of play at the Summer Hoops Festival.  Long known as a dynamic athlete that thrives in transition and dominates in the rebounding department, Walker has made great strides on the offensive end.  His jump shot has improved to the point that he must be respected out to the arc while his ability to handle and protect the ball in traffic when going to the basket provides him many “and one” opportunities.  Combine all that with a high motor and his physical gifts and high major college coaches see a special player.  Marsei Caston, a 6’2 wing, has been one of the major surprises of the spring and summer.  Injured early in the second contest, he still showed what all the buzz was about earlier in the day.  Caston is an explosive athlete that is relentless in his assault on the basket.  He’s strong enough to overpower smaller guards and quick enough to get past bigger defenders.  And no matter the size of the bigs protecting the rim, Caston is inclined to put them on a poster at every opportunity.  His jump shot and free throw need honing but his shot is more inconsistent than broken.  Caston is also a solid defender and rebounder from the backcourt.

We highlighted the play of 6’9 Kuany Kuany of the Sons on the last day of play.  However, he got quite a bit of help from Anyia Makoi, a 6’5 combo guard.  He brought the ball up court and initiated the offense often, suggesting he has some point guard qualities.  Makoi also has the attacking mind-set of a “two” as he shoots the ball well with range and has a quick first step to get to the basket.  A sneaky offensive rebounder, he got plenty of points that way.  Makoi has the lateral footspeed and wing span to defend positions one thru three on the perimeter.  On the interior, the old adage is “you can’t teach size” and that’s what 7’0 center Ibrahima Diallo has.  Offensively there is still work to do but Diallo rebounds his area well, gets up and down the floor swiftly in transition, and is a shot blocker and shot changer when defending the paint.  His best basketball is certainly on the horizon.

Showtime was another team that played two games during the Summer Hoops Festival’s opening night before heading to Atlanta.  Tyrell Jones, a 6’2 guard for the team, earned our “Player of the Day” nod for his performance that evening against the Mobile (AL) Warriors.  However, we need to give a shout-out to 6’0 A.J. Neal, a member of the 2021 Class.  He torched the nets in the first live period and continued to do so on Wednesday night.  Neal has a quick release on his three point shot and his range extends past the three point line.  He’s also become adept at getting into the lane off the dribble, tucking the ball away from prying defenders, and getting tough shots to drop in traffic.  When he scores, his points seem to come in bunches.

Hailing from South Florida, Team AutoNation has a solid group of players that college coaches from different levels were focused in on.  Sam Griffin, a 6’3 guard from Westminster Academy, showcased an ability to score from all three levels.  His pull-up jumper in the free throw circle area is a weapon that many players just don’t have.  Griffin is solid with the ball and generally makes good pass vs. shot decisions.  Chase Johnston, another 6’3 guard from Westminster Academy, has developed into far more than just a catch-and-shoot specialist, though he still does that very well.  He’s become quite adept and reading ball-screens and either pulling up for shots when given room or tossing a quick but catchable passes inside for scores.  Johnston is also a better athlete than given credit for and his defense has vastly improved.  Toru Dean, a 6’1 guard from South Miami, is the offensive catalyst for the squad.  Very quick and shifty with the basketball, he thrives when he can push the pace of the game.  His outside shot was a tad inconsistent in the two games we watched but when it mattered, Dean nailed a three off the dribble to get his team a win.  Dean looks first to get his teammates involved in the game but he has the talent and mindset to get his own when a bucket has to be had.  Lee Flenor, a 6’6 forward out of South Miami, does a little bit of everything for the team.  He’s a rabid rebounder and defender, an excellent athlete with length, and a guy that doesn’t have to score to impact the game.  Flenor scores best in transition, off of offensive rebounds, and various “opportunity” baskets.  Finally, forward Kwabena Opoku, a 6’8 rising senior from St. John Paul II Academy in Boca Raton, goes about his business scoring inside when he gets the chance, challenging shots in the paint, and pursuing rebounds both in and out of his area.  A bit raw on the offensive end, there is still a lot to work with that will produce results in the future.

One of the featured teams in the Under Armor Association, Team Breakdown performed well at the Summer Hoops Festival.  Paced by Kai Jones (one of our players of the day from Friday) on the interior and Jamal Mashburn, Jr. (our young gun from day one) on the perimeter, the Pink and Black have a nice mixture of experience and youth.  Experience comes in the form of rising seniors D.J. Warren and Demari Monsanto.  Warren, a 6’8 forward, does a lot of the dirty work inside when Jones needs a breather on the bench.  He has a solid frame and uses it well to control his rebounding area.  Warren can also score inside with some basic post moves as well as connect from mid-range when facing the basket.  At 6’6, Monsanto is a wing with a “born to score” mindset.  While somewhat quick to pull the trigger from three, he did show that he can dribble into and make shots from mid-range as well as get all the way to the basket and score thru contact.  He’s also a decent defender and better than expected rebounder on that end of the floor.  What gets college coaches excited about Team Breakdown is their core of young players that show a lot of promise.  All have good size, play hard at both ends of the floor, and have an attacking yet unselfish approach at the offensive end.  Selton Miguel and Jadrian Tracey, both 6’4 wings in the 2020 Class, may already be physically able to handle the rigors of college basketball.  Jordan Shorter (6’5) and Wesley Cardet (6’6) have just finished their freshman year of high school and look to have a high ceiling.  Shorter impressed with his court vision and passing skills while Cardett’s length and ability to finish at the basket was striking.

A marquee team on the Adidas Gold Gauntlet circuit, CP 25 fared well against a lot of top-flight challengers this past week.  Darrin Green, Jr was one of our players of the day from Friday while Xavier Johnson was a breakout player on that same day.  While the perimeter play was a big part of the team’s success, so to was the inside dominance of 6’9 Omar Payne.  A top forty member in the 2019 Class, there were a lot of college coaches watching his games this past weekend.  Currently, his greatest value comes as a rebounder, rim runner, and lane protector.  One of the buzzwords now is “switchability” and that is something that Payne does very well; stepping out on ball screens and defending smaller players until the opportunity comes to switch back.  Payne showed great improvement at the offensive end as he completed a smooth baseline drive on one play then later knocked down a left-handed jump hook, looking very comfortable doing so.  Also getting in on the action and making an impact was 6’5 wing K’mani Doughty.  A “glue guy” and “jack-of-all-trades” type of player, he can play and defend a variety of positions.  Doughty handles the ball well on the perimeter, finds and delivers the ball to open cutters, sneaks in for offensive rebounds, and makes open jumpers.  Defensively, he doesn’t mind playing physically in the post and moves his feet well along the perimeter.

While some pros simply lend their name to or fund a travel team, Mo Speights is getting down and dirty on the sideline.  His group was a pleasant surprise at the Summer Hoops Festival.  Isaiah Kirby, a 6’4 guard, was solid in the backcourt.  More scorer than shooter or distributor, he’s at his best when he can push the ball up the floor in transition and attack a scrambling defense.  Kirby completed plays in traffic at the basket and if sent to the line made his free throws.  He’s also a sly rebounder on the offensive end and defensively is alert for steals and tips in his area.  Chris Spenkuch is a 6’7 lanky and athletic forward that had some good moments this past week.  The lefty needs to continue to work on his perimeter shot but he does a fine job of getting to the basket and scoring after one or two dribbles from the high post and short corner areas of the court.  His long arms and quick leap allow him to overcome his slight frame to get things done in the rebounding department.  Dante Wilcox, a burly 6’6 forward, may be a bit under-sized from a height standpoint but he’s strong, is an excellent athlete, finishes above the rim in transition and from fifteen feet and in is an effective scoring option.