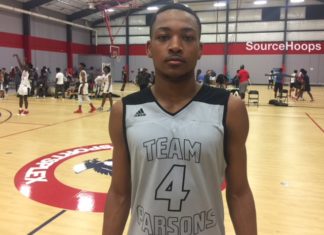 Day three is in the books for the Summer Hoops Festival.  It was so good that today’s article will have two of everything.  Consider it a two for one happy hour special of hoops.

GAMES OF THE DAY

More often than not, the best games of the day come later in the afternoon or early evening. Today however both Team Breakdown and Team Loaded Virginia came ready to play in the 10:00 AM contest.  Breakdown led by three, 38-35, at the half and a tight battle continued throughout the second period.  With 1:15 to play, Kai Jones completed a three-point play to give Breakdown a two point lead at 65-63.  The Pink and Black forced a turnover, and Demari Monsanto scored in transition to make it a four-point game with fifty-five seconds to play.  Team Loaded responded quickly and Levar Allen scored in transition.  Breakdown then turned the ball over and after a miss by a teammate, Team Loaded’s Earl Timberlake was fouled on the put back with thirty seconds to play.  He knocked down both fouls shots to tie the game at 67.  Breakdown held for a last shot and with ten seconds left, Jamal Mashburn, Jr. was fouled on a drive to the basket.  He missed the first but made the second, given Breakdown a 68-67 lead.  After a time out, Team Loaded got a good shot inside.  However, Kai Jones came over and snuffed out that shot, as well as Team Loaded’s chances of winning.  Who needs coffee to wake up in the morning when you have a game like this to watch?

Later in the day, the New York Lightning out of the EYBL took on CP 25 from the Adidas Gauntlet circuit.  Playing without Omar Payne, CP 25 still looked like it would cruise to a win as they led 38-28 at the half.  The Lightning came out with a renewed passion in the second half to make a game of it.  With under one minute to play, CP 25 led by just two at 70-68 with possession of the ball.  They attempted to run out the clock but a steal by Dashawn Davis of the Lightning led to a score and a tie ball game with twenty seconds left to play.  After a timeout, CP 25 ran a set play that broke down and Darrin Green, Jr. was forced to improvise.  Green connected on a mid-range jumper off the dribble with just two seconds left on the clock.  The Lightning called timeout to set up a play but were unable to go the distance for a score in such a short amount of time.  CP 25 held on for a 72-70 victory.

PLAYERS OF THE DAY

Not surprisingly, our Players of the Day come from our Games of the Day.  Kai Jones of Team Breakdown may not have put up jaw-dropping numbers (13 points) but his six blocks were big time, especially his last one.  Also, its easy to see why coaches love his potential for what he could be in two to three years.  Jones has a solid jump shot out to fifteen feet and he also has proven this live period that he can put the ball on the floor and score after a dribble or two.  A big man that can shoot free throws, run the floor, protect the rim and cover a lot of ground defensively is highly desirable and that is just what Jones is.

Truth be told, Darrin Green, Jr. has been good all week long here at the Summer Hoops Festival.  However, in a high stakes game against the NY Lightning, his game seemed to elevate.  It is to the point now that if Green misses a three-point shot, it is a surprise.  He is particularly deadly from the corners off the catch and CP 25 does a great job of running plays that find him open to do just that.  In the night cap, he showed he can also score off the drive as well as take and make the big shot.  He tallied 24 points, going 6-12 from deep in the process.

BREAKOUT PLAYERS OF THE DAY

Xavier Johnson, a 6’2 guard for CP 25 has been quietly solid for the team this week.  However, late in the game against the Lightning, he came up big.  Johnson made a pair of threes and completed a tough finish in traffic to keep CP 25 in front as the Lightning threatened to tie or take a lead.  He seems very comfortable in the role of either scorer or setup man.  Johnson also isn’t afraid of a challenge on the defensive end.

We really liked what we saw from South Florida Elite’s 6’7 Yves Fleuranvil out of Royal Palm Beach.  Despite the 9:00AM tip time, he was bouncy and energetic from the opening tip.  He showed a good touch around the rim and pursued rebounds with a vengeance.  Fleuranvil gets up and down the floor quickly, challenges shots at the rim, and doesn’t mind playing physically on the defensive end.  No doubt he took home some additional offers based on today’s play.

Henry Coleman III of Team Loaded is a rising junior at Trinity Episcopal in Virginia but has no physical resemblance to your average rising junior.  Strong and well-built, Coleman gets a lot done in the paint and is extremely active in the rebounding department at both ends of the floor.  He showed the ability to step out and make plays from the perimeter and is explosive enough inside to power thru defenders and dunk on them from a stand-still.  He embraced the challenge of playing against the taller Jones early in the day and was impressive in his performance.

Taderrius Davis of the Florida Lightning just finished his freshman year at Miami Senior.  Playing up a year in competition, the 6’5 rail-thin wing was fierce in his efforts to attack the basket.  He knocked in just enough perimeter shots to keep the defense honest.  Despite his lack of heft, Davis didn’t shy away from competing on the glass at either end.

One more day of the Summer Hoops Festival awaits.  It should be a tremendous finale to a standout week!