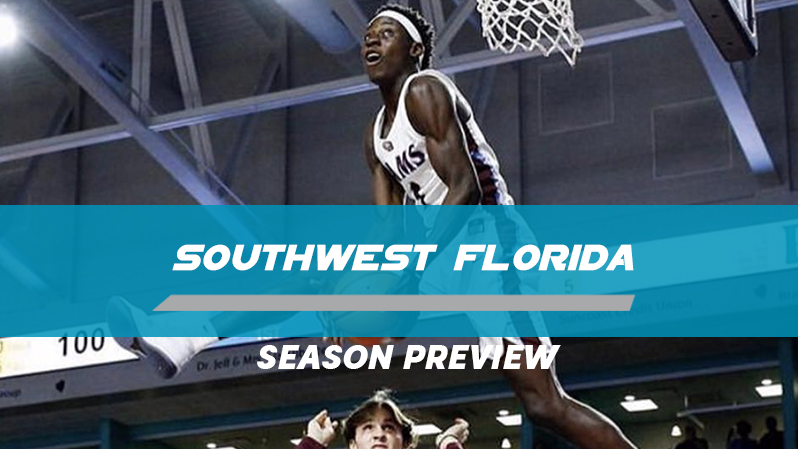 Lakewood Ranch moves into the state’s largest classification this year and immediately becomes a contender in Region 2 to reach Lakeland.  Keon Buckley, a 6’0 senior guard, and Christian Shaneyfelt, a 6’6 senior wing, have led the squad to a lot of success the past three years and expect that to continue into 2020.  Help from Luke Lecroy and Carter Chapin, both 6’6 seniors, will be vital as the season progresses.  A challenging schedule awaits Lakewood Ranch but the program has a reputation for playing a smart, tough brand of basketball.

Residing in the same district as Lakewood Ranch, Riverview is still a quality team despite the losses of B.J. Ivey (now coaching at FGCU) and Malachi Wideman (to Venice HS).  The talent is still there, led by 6’7 junior Jayven Millien, a high flyer who is getting some mid-major level D-I interest.  Marquel Bryant, a 6’2 senior, is an experienced and steady hand at running the point.  Once again, the team faces a difficult schedule, highlighted by a return to the main field at the City of Palms Classic.  Barring injury, this group should be hitting on all cylinders come playoff time.

The Tarpons will certainly miss the talents of both Ahmad Johnson and Makai Reeves who graduated but still return plenty of experience and fire power.  It starts with 6’7 junior Tre Carroll, a lithe forward that can play both inside and out and developed a national reputation this past spring and summer on the travel circuit.  Helping him inside will be rapidly developing 6’8 senior Faustin Phanor, a shot blocker whose offense is developing.  Perimeter points should come from 6’2 senior guard Tyrik Gainor and 6’4 freshman John Gamble.

A young group that made a run deep in the playoffs last year is now a year older and more experienced, which should lead to another level of success.  It begins with the play of 6’3 senior and Murray State commit Dionte Blanch.  His play on the travel circuit earlier this year was an eye-opener to many college coaches.  He will be aided by 6’0 senior Jordan Hillmon and 6’2 junior Dean Gabrelcik, both of whom scored in double-figures per game last year.  With the notoriety of Blanch, the schedule has stepped up, so it will be a well-test group come playoff time.

We slot Riverdale in here despite the transfer (again) of Jadrian Tracy.  This is primarily because (a) a conversation with Head Coach Darrin Darrin Wallace revealed he thinks his group goes ten deep even before Tracy re-enrolled for a few months and (b) the play of 6’9 junior Tyrone Baker over the spring and summer showed that he has the tools to make a significant impact at both ends of the floor.  Choosing Riverdale for this spot over the likes of Bartow, Fort Myers, and/or Tampa Sickles may be a shot in the dark, but we’ll let it fly!

Tucked away in Pasco County, Anclote was led by a group of juniors last season and made a deep playoff run.  Now seniors, they are hoping to shed the label that Pasco teams fade against schools from “the big city”.  The team features an inside tandem of 6’7 seniors Jakob Hester and DeQuan Rowland.  Both are big, strong, and physical.  Hester is a bit more offensive-minded while Rowland devours rebounds and shot attempts near the rim.  On the perimeter, 6’6 senior Jalen Cooper and 6’0 senior Jacobie Forrest can score from a variety of distances and angles.

Re-districting by the FHSAA put Tampa Catholic into a very difficult district with the likes of St. Pete Gibbs, St. Pete Lakewood, and Sarasota Booker.  However, most of the team that reached Lakeland last year returns, more experienced and much wiser after being humbled by University School out of Fort Lauderdale.  Johni Broome, a 6’8 senior, has become a force inside at both ends of the floor.  He gets plenty of help from 6’8 senior Isaiah Elmore.  Seniors Kobe Knox (6’3) and Alijah Harrison (6’5) give Coach Don Dzagwa a potent perimeter combo that can score points as well as defend.  TC has a solid supporting cast around that core and as always will take on a challenging schedule to prepare them for the playoffs including a road game at Montverde December 10th.

The changes in classifications and district didn’t benefit Berkeley, which still must face powerful rival Tampa Prep as well as a potent Seffner Christian club.  Still, Head Coach Renaldo Garcia has the talent to compete at a high level for district honors and beyond.  Kegan Karnes, a 6’0 senior, is a sniper out on the perimeter and a tough-as-nails competitor on both sides of the floor.  R.J. Garcia, a 6’1 junior, proved over the off-season that he is a steady hand at running the club and a point guard that can push the pace and find teammates for easy shots.  C.J. Hawkins, a 6’6 sophomore, continues to improve his perimeter skills while also being the team’s enforcer on the interior.  If Berkeley can make it into regional play, they have a good shot at a deep run.

Santa Fe Catholic doesn’t have great size nor depth, but their four guard lineup can play with anyone!  Joe Stubbs, a 6’3 senior, is a bull going to the basket.  Jovan Bell, a 6’5 senior, is adept at getting to the rim and scoring thru traffic.  Antwon Walker, a 6’4 senior, came over from Haines City.  He can light it up from deep and is an active defender.   Orchestrating all of this is 6’1 senior Ray Davis, a crafty ball-handler and a player that will produce points when called upon.  If the team can avoid injury and illness, they have a solid chance to get to Lakeland.

This group reached Lakeland last year and came very close to winning a title.  The road will be more challenging this year but this is a group that can get it done.  Junior guards Mike Trigg and Willie Jones, are a potent perimeter combo.  Trigg sees a lot of time at point guard but is a solid shooter and scorer.  At 6’4, his size makes him a tough matchup for smaller guards.  Jones, at 6’5, is athletic, is a fierce transition finisher and respectable outside shooter.  The addition of 6’6 sophomore Tony Livingston from Carrollwood Day give Seffner not only another scorer but a presence inside and a consistent rebounder.

Malachi Wideman, Venice: The 6’5 Wideman is a bundle of athletic energy and when he goes off, he goes off!  While most of the his damage comes in transition, drives to the basket, or lobs to the rim, his jump shot continues to improve and he now understands he can pretty much rise up over any defender and squeeze off a mid-range jumper.  We suspect the FSU football recruit made the switch to Venice for football reasons, but there is no denying his talent on the hardwood.

Dionte Blanch, Tarpon Springs East Lake: The 6’3 guard is strong, gets to the rim with ease, and scores well thru contact in traffic.  He is a solid ball-handler, distributor and decision-maker on the move.  His jump shot extends to the arc and he understand what plays to make when using ball-screens.  Blanch can be tough on the defensive end, using his strength to keep opponents away from the basket.

Jamil Reynolds, St. Petersburg Lakewood. When engaged, the 6’9 senior and UCF commit can be a force in the paint.  He’s strong, bouncy, and possess a nice touch on a righty jump hook.  He’s a good rim protector and a guy that can beat other bigs down the floor in transition.  How good Reynolds wants to be is strictly up to him.

Johnni Broome, Tampa Catholic: The 6’8 lefty produces points inside with solid footwork, a soft touch, and an understanding of how to create space to get his shot off.  He can also step away and make shots out to about fifteen feet.  He rebounds his area well on the defensive end and while not the possessor of great leaping ability, Broome does a good job of protecting the basket and challenging shots in the lane.

Jayven Millien, Sarasota Riverview: The 6’7 junior still has some refinement to do on his overall offensive game but he’s very talented.  He can make threes well past the arc or drive the ball and finish above the rim.  He’s a decent ball-handler and active offensive rebounder.  Defensively he can create problems with his quickness and long wing span.

#1 SO: Emmanuel Sharp, Tampa Blake: The 6’3 Sharp took the Tampa Bay area by storm as a freshman, averaging over twenty points a contest.  He impressed on the national stage this summer, averaging thirty points a game in the EYBL 15U Peach Jam playoffs then leading the field in scoring at the FIBA 16U European Championships playing for Israel in August.

#1 FR: John Gamble, Punta Gorda Charlotte: All kinds of long and athletic, the 6’4 Gamble made quite the impression this fall at various team camps and individual showcases.  He’s got decent skills, and once he learns better how to marry those skills to his top-shelf athletic ability, Gamble will certainly pay off.

Senior Sleeper: Ja’Keese Kemp, Lakeland George Jenkins: Slender but athletic, the 6’3 wing does a little bit of everything.  He’s long and quick to the basketball, whether it be on rebounds or loose balls.  Kemp is a good decision maker and throws passes that are catchable and immediately usable.  His shot is solid out to the arc.