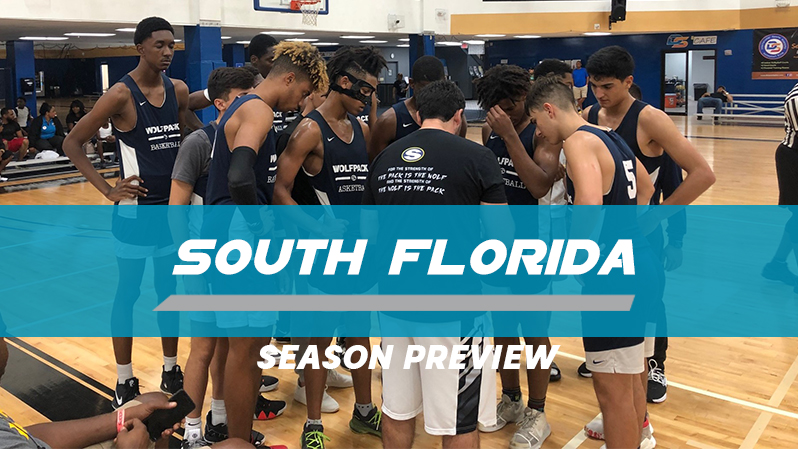 This team from South Broward has a very good chance to reach Lakeland this season. Key to the season will be the play of 6’2 senior guard Brent Davis.  A Citadel signee, Davis is capable of playing either guard spot.  He’s a capable passer and on-ball defender and can light up the scoreboard from deep.  He’s not alone as 6’4 sophomore Deshawn Charles is an amazing athlete that gets a lot done on both sides of the ball.  He’s dynamic in transition and as his perimeter skills progress, he will get a lot of attention on the recruiting front.  Fellow sophomore 6’2 Faheim Meran played will on the 17U level this past spring and summer and should make major contributions.  Overall size and depth could be an issue, but Miramar is poised to have its finest season in recent memory.

In one of the strongest districts in the state, the Panthers look to be the favorite at the starting gate.  Jalen Haynes, a 6’7 senior, has developed into a mismatch problem for opponents.  He is a skilled scorer around the basket and has developed perimeter shot to the point where defenses can no longer slack off of him.  Senior Ivan Reynolds, a 6’4 guard, transfers in.  He’s a pass first guard with excellent vision and court sense.  He can score if necessary but prefers to get his teammates the ball for easy shots.  Kirt Bromley, a 6’2 senior, will provide plenty of scoring from the backcourt.  The supporting cast isn’t well-known yet but no doubt there will be guys that make their mark during what should be a deep playoff run.

“Mater” had quite on off-season as they dominated nearly every team camp and summer league they participated in.  Malik Reneau, a 6’6 sophomore, was dominant as a freshman and will only get better.  He has a great understanding of the game, is a crafty scorer, controls the defensive glass and protects the paint.  The backcourt of 6’2 senior Isaiah Josue and 5’7 junior Ryan Sanchez will provide plenty of perimeter firepower to take pressure off of Renau inside.  To make things even tougher for opponents, the legendary Marcos “Shakey” Rodriguez is the head coach, so the team will more often than not carry a sideline advantage into every game.

Re-districting by the FHSAA dropped South Miami down one classification and into a very challenging district and region, but the Cobras have plenty of talent and a good chance to get into the playoffs where anything can happen.  They will have a dominant force on defense in the form of 6’10 center Brandon Sanders. Long, quick, and agile, Sanders explodes off the floor for boards and blocks.  He’s unpolished at the offensive end but will make the most of his opportunities on putbacks and lobs.  Junior guard Arturo Dean lit up scoreboards last season.  The 5’10 guard can stroke it from deep but is very quick to the hoop with the ball.  Nic Louis Jacques transferred over from Killian and will provide another perimeter threat for South Miami.

Arguably the toughest district in the region with the likes of Boyd Anderson and Pines Charter standing in their path, Northeast fields one of the more talented teams in the state regardless of classification.  Wesley Cardet, a 6’5 junior, is a national-ranked wing.  He’s got a high skill level and basketball IQ, plays with passion, and attacks opponents at both ends of the floor.  Senior 6’0 guard Tyreke Francois transferred over and the lefty is quick with the ball, knocks down perimeter shots, and loves to push the pace.  Inside, 6’9 freshman twins Matthew Bewley and Ryan Bewley play well beyond their years.  Both are excellent athletes, make plays around the basket, and can step out on the perimeter and score.  Other key contributors will be 6’3 junior J.J. Harris and 6’2 senior Jermaine Dyges.

This group won a state title last year in Class 6A but will find it a significant challenge to repeat after re-districting.  Still it is a talented group that lost only one starter from last season.  Manning the middle will be 6’6 senior Inady Legiste.  He plays bigger than his size, score well on the interior, and protects the basket area very well.  Senior guards Chase Culpepper and David Herrard complement each other well.  Culpepper will step into the point guard role.  He’s tough to stop when driving to the basket and is a dogged defender.  Herrard’s future may be in football but he’s a threat from deep and an entertaining finisher in transition.  Thaddeus Squire, a 6’5 junior, should provide added production on the wing.

It should be quite the battle for district dominance between Stranahan and U-School.  The Sharks may have lost Vernon Carey to graduation and Scottie Barnes to Montverde Academy, but nearly every one of significance returns for a run at a third straight title.  Roger McFarlane, a 6’4 senior, is a bulldozer in human form that simple overpowers opponents when driving to the rim or going after rebounds.  He’s developed into a solid mid-range shooter as well.  Senior wing Jace Howard does a little bit of everything at both ends of the floor.  A pair of sophomore, 6’4 Jett Howard and 6’8 Taylor Hendricks, had excellent summers, have vastly improved, and will make significant contributions.

The Lions will miss the graduated Toumani Camara, who now plays at UGA, but this group still has quality pieces in place.  Andre Weir, a 6’9 senior and Northeast University signee, is nearly unstoppable if not double-teamed in the post.  Not only is he a consistent scorer down there, he is also a crafty passer to cutters.  He gets help from 6’7 senior John O’Neil as he can stretch the floor with his perimeter shot but also help inside.  Dax Kaye, a 5’10 senior is dangerous from deep while 6’1 junior Thaddeus Franklin, once he comes off the football field, gets to the basket with ease and finds open teammates when his path is blocked.  This group has everything it takes for a deep run in the playoffs.

It has been a while since the Scots have been to Lakeland, but this season could change all that.  Yussif Basa-Ama, a 6’9 senior heading to Yale next fall, is an athletic game changer on the defensive end and an improving scorer down in the post.  He gets plenty of help from 6’6 junior Josh Minott, a basketball version of the swiss army knife.  Minott plays multiple positions and all of them well.  Seniors Koby Pelissier (6’0) and Jackson May (6’4) provide plenty of perimeter scoring to make it difficult to collapse on Yussif down low.

This group surprised a lot of people last year in getting by Miami Christian to reach the Final Four in Lakeland for the first time.  This year, the Wolfpack will be the hunted and not the hunter.  However, based on the talent level of this group, it may not matter.  Senior Anthony Lopez (6’4) is a blur to the basket and makes enough perimeter shots that the defense can’t back off and only play him for the drive.  Jimel Cofer, a 6’4 junior, has been spectacular at times this fall in various events, both with his athleticism and high skill level.  A pair of senior guards, 6’1 Jose-Luis Benetiz and 6’0 Cedrick St. Jean wreak havoc on both ends of the floor with their attacking and aggressive mentality.  Through in 6’7 junior Jehu Wright and 6’11 junior Jabari Williams, and the Wolfpack can play with anybody.

Wesley Cardet, Oakland Park Northeast: Cardet is a nationally regarding player in the Class of 2021.  The 6’5 wing can play multiple positions on the floor, finishes drives well with either hand at the rim, is a solid passer, improving shooter from deep and a guy willing to “D-Up”.  While a bit on the thin side, he is wiry strong is scores well through contact.

Devin Carter, Doral: Last year, his first in the state, the 6’4 Carter averaged better than twenty points a contest.  This past spring and summer, he elevated his national stock playing with Team Knight.  Carter has every tool you would want a player to have in his offensive arsenal.  The senior can create and make his own shot, scores from all three levels, is a good ball-handler and passer, and makes good decisions on the move.  Carter is also a very good athlete and an active defender both on and away from the basketball.

Jaylen Haynes, Fort Lauderdale Dillard: Haynes, a 6’7 senior, has developed into a versatile inside/outside performer.  The lefty scores well inside when not physically challenged and is quick off his feet for lobs and putbacks.  He’s become a confident ball-handler on the perimeter and has vastly improved his ability to knock down shots from the three point line.

Tony Sanders, Miami Gulliver Prep: The 6’7 senior is wired to score and he does so in a variety of ways.  He takes and makes deep shots on the perimeter and has a quick first step to the basket.  Lethal in transition, Sanders seemingly creates gaps in the defense to score in traffic.  His combination of size and quickness make him tough to cover.

Andre Weir, Hollywood Chaminade-Madonna: At 6’9, the senior has a big frame and knows how to use it inside.  He has good footwork in the post, a soft touch with either hand around the rim, and isn’t afraid to get physical on either end of the court.  Weir is also a decent passer when double-teamed down low and sest a serious ball screen.  He’s headed to Northeastern University in Boston next year.

#1 SO: Greg Glenn, Fort Lauderdale Calvary Christian: The 6’7 wing has the frame and strength to play inside but also has the skills level to be productive on the perimeter.  He spent time with USA Basketball this off-season and impressed national scouts and media.

#1 FR: Matthew Bewley, Oakland Park Northeast: The 6’9 Bewley, along with twin brother Ryan, is not your typical tall but gangly freshman.  He has great coordination, is very athletic, is skilled enough to make shots out to the arc, and is fast up and down the floor.  Add in his rebounding and shot blocking prowess and the ceiling is extremely high for Bewley.

Senior Sleeper: Josh Cecol, Belen Jesuit: The 6’8 Cecol is a solid post player that is getting a lot of D-II and D-III attention.  What he lacks in athletic mobility he more than makes up for with his ability to score inside, play pick-and-roll or pick-and-pop, and control his rebounding area on the defensive end.