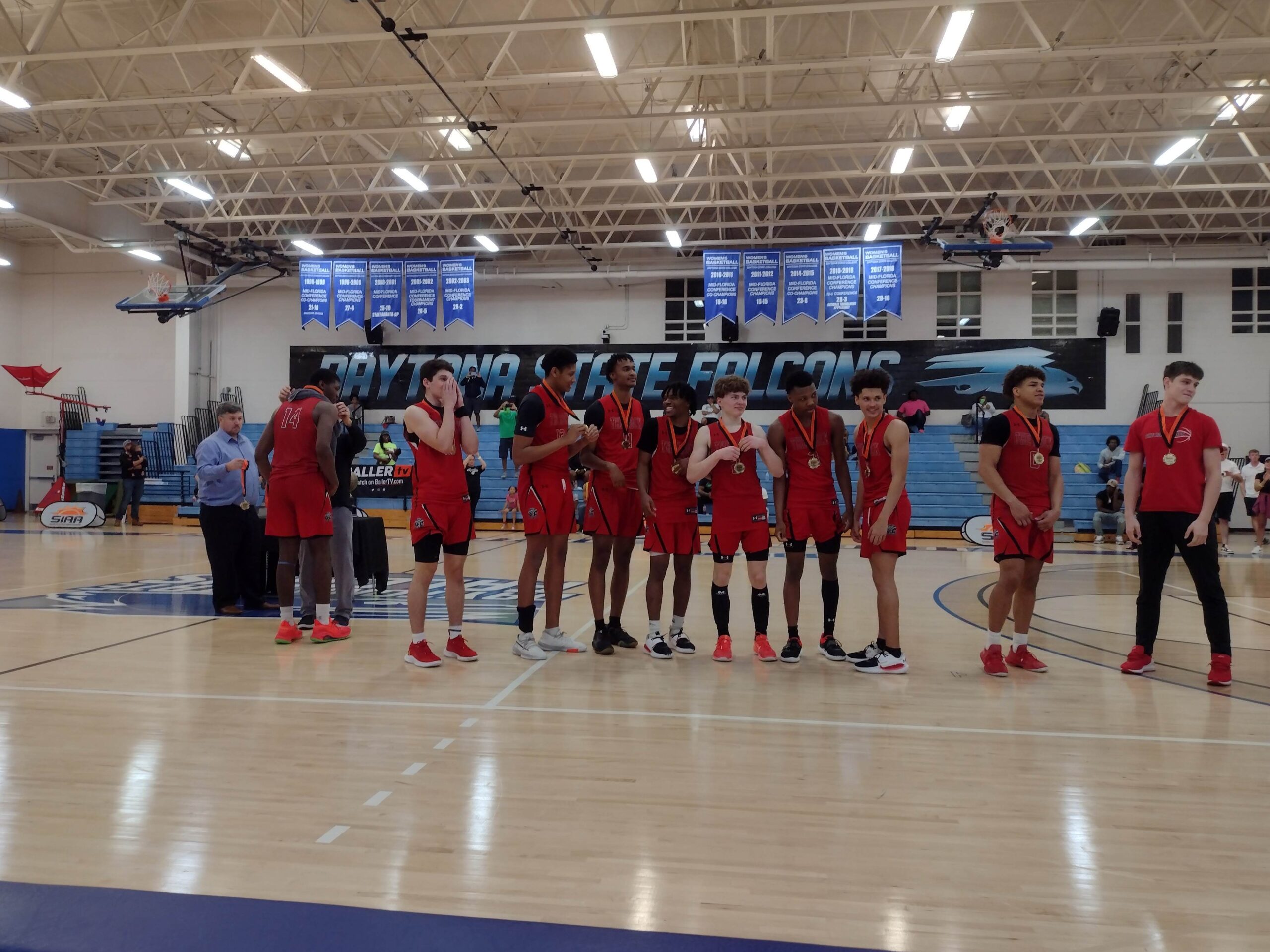 The Sunshine State Independent Athletic Association (SIAA) held its state tournament this past weekend at Daytona State College.  Two of the original SIAA members, West Oaks Academy out of Orlando and The Rock School out of Gainesville, met for what promised to be an epic title game.  If Celtics/Lakers is the best rivalry in the NBA and Duke/North Carolina is the best rivalry in college basketball, then this matchup is THE rivalry in high school hoops.

Moe Sabiu got the Flames of West Oaks on the board first with a putback but The Rock’s Sammie Yeanay responded quickly with a transition basket.  West Oaks then got four points from SIAA MVP Maurice Odom.  After another bucket inside from Yeanay, R.J. Moore hit a three and Sabiu put back another miss to make the score 11-4 in favor of the Flames with just over four minutes gone in the opening half.  A 6-2 Rock run got the Lions to within three but a Chris Mubiru three made the score 16-10.  The Rock scored two buckets to get closer but another Mubiru three gave Wet Oaks a 19-14 lead at the under-nine-minute media timeout.  Moving forward a bit with West Oaks up seven 24-17, The Rock put together a 10- 0 run as Yeanay hit two free throws and Evan Sterck scored the games next eight points to give the Lions a 27-24 lead with under four minutes remaining in the half.  Odom hit a three for the Flames to tie the game but Yeanay responded with four points to give The Rock back the lead.  Odom hit another three to draw within one but once again Yeanay came thru with a pair of dunks to push the score to 35-30.  Odom hit four straight free throws on the next two West Oaks possessions to get back to within one but a late three from Kameron Wright of The Rock made the score at the break 38-34 in favor of the Lions.

Moore of West Oaks opened up the second half with a three.  Yeanay countered with a dunk inside but Odom scored on a drive to make it a one-point game.  Wright hit a three for The Rock, but a score inside by DeShawn Jean-Charles and a three from Odom gave the lead back to West Oaks at 44-43.  The Rock responded with an 11-4 run over the next few minutes to grab a 54-48 advantage.  Both Charles and Moore scored for West Oaks to get back to within two but Sterck hit a three to push the lead back to five at 57-52.  West Oaks then got surprise contributions from Ibrahime Traore with a free throw and a transition basket from Grace Aluma to get back to within two.  After Alex McCray of The Rock made one of two free throws, Odom hit another three to tie the game at 58-58.  Yeanay hit two free throws to give The Rock the lead just before the media time-out.  After a pair of free throws for each team, the Lions pushed their advantage to seven with two free throws from Yeanay and a three from Horne to lead 67-60.  That lead would grow to 70-62 but West Oaks was far from done.  Moore scored four points and Aluma scored in transition to get the Flames back to within two at 70-68.  After a basket for each team, Yeanay converted a three-point play with 3:16 left to put The Rock up 75-70 and forcing a West Oaks timeout.  The Flame then reeled off a pair of baskets to get back to within one.  The Rock didn’t hesitate to get its lead back to four but another Odom three made it a one-point game.  Time was beginning to run out for West Oaks so they began to put The Rock on the foul line.  With thirty-seconds left to play, The Rock led by four, 82-78.  Moore scored inside for Wet Oaks with fifteen seconds left and after a Rock turnover, Faheim Meran had a chance to tie the game after being fouled.  He made one of two free throws and West Oaks fouled Wright to stop the clock with six seconds left.  Wright converted both free throws to make the score 84-81.  West Oaks didn’t hesitate, getting the ball to Odom. He launched a shot a few stops past half-court just before the buzzer. It hit nothing but net and a thrilling game goes into overtime tied at 84-84.

In the OT, The Rock gained the initial upper-hand as Horne made one of two free throws and Sterck scored on a baseline drive to make the score 87-84.  Mubiru of West Oaks tied the game with a three.  Sterck came back with a three for The Rock but Moore converted a three-point play to tie the game at 90-90.  Wright of The Rock was fouled and made both free throws and after an empty West Oaks possession, Jacob Sterck of The Rock got loose and scored on a baseline drive to make it 94-90 with thirty-five seconds left.  The crafty Odom drew a foul on a three-point shot attempt for West Oaks on its next possession and he connected on all three to get to within one.  The shot clock was now turned off and after trying to get a turnover, West Oaks was forced to foul.  Yeanay stepped to the line and connected on both shots with fourteen seconds left.  Out of timeouts, the Flames rushed the ball up the floor.  They had two good looks at a three but neither one of them would find the target.  Time would run out as the teams scrambled for the final rebound and The Rock wins the SIAA state championship in thrilling fashion, 96-93.

Yeanay was named MVP of the tournament after scoring 33 points in the title game.  Evan Sterck contributed 25 points while Wright finished with 17 points.

Odom of West Oaks was the game’s high-scorer with 34 points.  Moore contributed 25 points to the Flames’ cause.