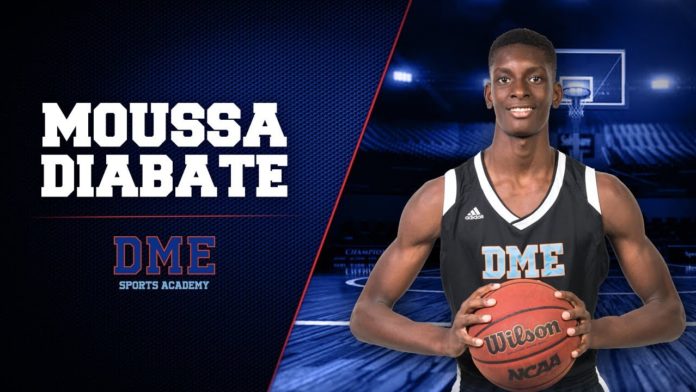 The Sunshine Independent Athletic Association plays its conference games on Tuesday nights and one of the premier matchups to officially start in-conference play took place last night in Daytona Beach as DME Academy hosted Potter’s House Christian Academy out of Jacksonville.  Potter’s House had received national recognition in some pre-season polls so this would be a good test for DME.  It would also be a good test for Potter’s House as playing on the road in a highly competitive league like the SIAA is never easy.

That held true to form as DME got out to a 13-6 lead in the first five minutes of the opening half (SIAA schools play eighteen minute halves with a thirty second shot clock).  DME’s combo of 6’4 senior guard Malcolm Farrington and 6’8 sophomore Moussa Diabate made things difficult as Farrington was on target from beyond the arc and Diabate was finding success around the basket.  Potter’s House struggled to score from the perimeter the entire first half and found it difficult to rebound at either end against a taller, more active DME front line.  By the end of the first half, DME had stretched its lead to fifteen points at 44-29.  With 15 points and 10 rebounds, Diabate was playing exceptionally well.  Potter’s House 6’2 senior Marsei Caston had success in transition early on and lead the team with seven points at the break.

Early in the second half, DME led by as many as twenty points.  Down 51-34 at the thirteen minute mark, Potter’s House began to climb back into the contest.  They forced some DME turnovers and converted them into points, closing the gap to ten at 58-48 with eight minutes to play.  By the six minute mark, Potter’s House was within six at 63-57, but Diabate converted a three point play to make it a three possession lead.  Potter’s House continued to whittle the margin down, thanks to some timely three point shooting from 6’0 senior guard Milan Harrison.  With four minutes to play, the score was 68-63 and it was anybody’s game.  However, a free throw by DME’s Vadim Clanet and a three from Farrington pushed the margin back to nine at 72-63 with two minutes to go.  Within a minute, Potter’s House responded with a put back by Harrison and three free throws by Dontevious King.  With just over a minute to play, the score was 72-68.  Potter’s House misfired on a chance to draw closer and Diabate was fouled with twenty-two seconds remaining.  He drilled both free throws to push the margin back to six.  Potter’s House would not be able to draw closer and DME held on for a 74-68 win.

For Potter’s House, both Caston and Harrison each scored 14 points while 6’7 senior Whenza Panzo added 10 points.