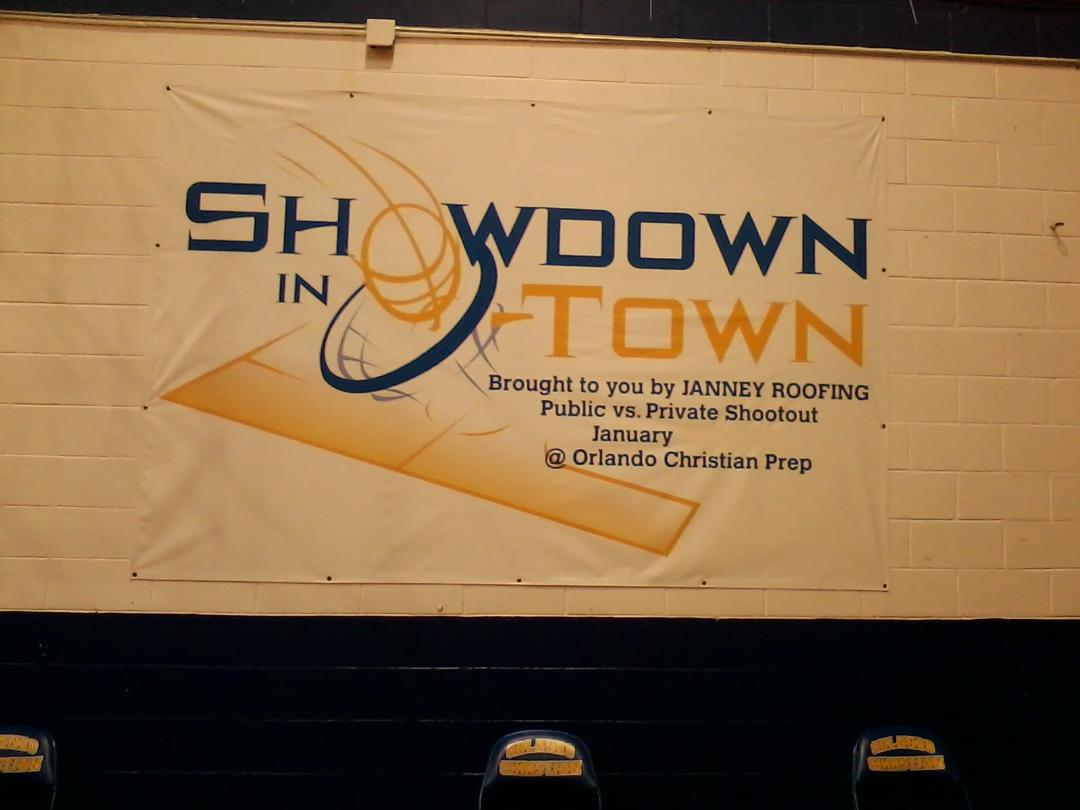 We ventured to Orlando Christian Prep for the Tenth Annual Showdown in O’Town event.  The event annually features matchups of private and public school powers in Orlando and the surrounding area.  Before we get into the games, we want to give Coach Treig Burke of OCP a big thumbs up for recognizing the loss of Earl Graham to COVID this past week and leading a moment of silence.  Coach Graham had been a great mentor to many a young man in Orlando.  Most recently, he was on staff with Coach Scott Williams, first at Wekiva and then at Apopka High School.  Coach Graham will be greatly missed.

The Kowboys got out quickly and never looked back.  The Saints of Trinity Prep just didn’t have the size or overall speed, quickness, and athletic ability to keep up.

We came away intrigued with Osceola’s Jimarion McCrimon.  The 6’6 sophomore comes from an accomplished athletic family is also a collegiate football prospect.  He has a big frame and already wears a size 16 shoe!  McCrimon finished with 12 points and 11 rebounds, seven of which came on the offensive end of the floor.  He showed good hands, touch around the basket, and an ability to control his rebounding area.

For Trinity Prep, Jalen Coley, a 6’0 senior, led the way with 16 points.  He used his ability to get to the basket, score and/or draw fouls to get his points.  He also grabbed seven rebounds in the contest.

This game was far closer than the score indicates.  Oakridge led the majority of the first half until a late spurt gave Windermere Prep a 26-24 halftime lead.  After tying the game at 30-30 midway thru the third, the Pioneers of Oakridge outscored the Lakers 13-7.  Windermere Prep got to within three, 49-46, with 1:30 left to go, but Oakridge hit their free throws to win a very tough contest.

Jeremiah Bannister, a 6’6 senior for Oakridge was a key factor for the Pioneers.  Not only did he contribute 14 points and 5 rebounds, he also battled the Lakers’ 6’11 senior Elijah Hulsewe to a stand-off in the paint.  A gridiron prospect along the defensive line, Bannister plays with an even keel, never letting his emotions get the best of him.  He makes the most of his opportunities around the basket and was 6-6 from the foul line, important in a tight contest like this one.

Windermere Prep’s Zavian Williams led the Lakers with 14 points.  The Rhodes College signee is a blur with the ball, always pushing the pace.  His perimeter shot continues to improve, as he was 3-3 from mid- to long-distance.  He also does an excellent job of moving his feet on the defensive end and keeping the opposing dribbler in front of him.

The Braves of Boone had control of the game for most of the first half, leading 28-26 at the break.  Trinity opened the third period with an 8-0 run and never trailed from that point.

Ryan Stanakis, a 6’1 senior, paced the Eagles with 23 points.  He went 4-8 from beyond the arc on the day and displayed toughness and grit on both ends of the floor.  He was solid on the defensive end, made good decisions with the ball, and always seemed to be in the mix for 50/50 balls.

Also playing well for The Master’s was 6’3 sophomore Eduardo Placer.  The lefty can play either guard spot, score on his own or get others involved, and contributes in the rebounding department.  He scores well going to the rim or pulling up for jumpers and has range out to the three-point line.

A name to note is Zion Mitchell, a 6’1 freshman at The Master’s Academy.  While he struggled a bit in this contest, it’s clear he has a high ceiling when it comes to the growth of his game.  Mitchell plays with confidence and doesn’t shy away from challenges.  Coach Reggie Kohn and The Master’s Academy have churned out some solid guards over the years and Mitchell could be the next in line.

Javion Phelps, a 6’3 senior for Boone, is another duel-sport athlete that had a good day at The Showdown in O’Town.  A wide receiver heading to South Dakota for football, Phelps had 20 points and 8 rebounds in his team’s loss to The Master’s.  As expected, Phelps is a good run/jump athlete.  However, he relies more on his perimeter shot, which is solid, than he does on using his physical gifts to get to the basket.  When he does “go to the hole”, he usually earns a trip to the charity stripe.

O.M.G., was this a great game!  Windermere in general and University of South Florida signee Tre Moss in particular, came out strong from the start.  The Wolverines of Windermere led 13-6 four minutes into the contest and 20-15 after one quarter of play.  That lead went from five to fifteen at one point in the second quarter before OCP found a groove to cut the halftime deficit to eight at 36-28.  Moss had five threes in the half.

OCP finally got a lead late in the third quarter and led by one, 45-44 with one period left to play.  The Warriors of OCP led 51-50 with four minutes left to play but Windermere responded with a 7-0 run.  That is when things got a bit wild.

With Windermere up 59-55 with around thirty seconds remaining, OCP’s 6’7 sophomore Ven Allen Lubin garnered a steal and headed for the basket.  His attempt at a violent tomahawk dunk was met at the summit by Windermere’s 6’3 senior Kanye Jones.  The ball ended being stuck between the rim and backboard, and whistles were blown.  Though the block looked clean, the refs called a foul with the body on Jones.  They also called a “taunting” technical on Jones.  Meanwhile, Lubin had landed on his tail bone and was in obvious pain.  He was helped off the floor and 6’6 senior Ocypher Owens was subbed in to shoot the foul shots.  He made one of two.  A.J. Brown, a 6’4 junior for OCP, connected on both of the technical free throws, to bring the Warriors to within one, 59-58.  Because of the technical, OCP had possession of the ball.  Brown drove to the basket and drew a foul.  Again, he connected on both free throws to give OCP a one-point lead with thirteen seconds remaining.  Windermere pushed the ball up the floor and drew a foul with 8.6 seconds remaining.  However, both shots were off target.  OCP got possession, got the ball to Brown, and he was fouled.  He coolly knocked down both shots to give OCP a three-point lead with six seconds left.  Windermere was unable to tie the game with a three and OCP pulled out a big win at home.

Brown paced OCP with 23 points and was clutch with six straight free throws in the closing seconds of a tight game.  He was not to be denied when attacking the basket as all his points were either at the basket or the free throw line.

Lubin finished with 17 points while also grabbing 7 rebounds and rejecting a pair of shots.  OCP determined at the break that Lubin had the mismatch on offense.  They went to him repeatedly and he responded, scoring nine of his points in the third quarter.  Not flashy, Lubin gets a lot down in a lot of different phases of the game.

Jayden Hastings, a 6’9 sophomore for OCP tallied 10 points, 9 rebounds and 4 blocks in the contest.  His matchup with fellow sophomore Sean Stewart of Windermere was must-see.  Hastings has a high ceiling, thanks to his combination of size, athleticism, and skill.

Speaking of Stewart, there were times where he looked like the best prospect on the floor.  He drilled a three, knocked down a pair of contested mid-range jumpers off the dribble, and scored at the basket after one or two dribbles from the perimeter.  Stewart already has some high-major offers and no doubt more will be coming his way.

Moss went 7-14 from beyond the arc, finishing with 21 points.  He also tallied four assists and a pair of steals.  Few of those shots were open catch-and-shoot threes.  Many were closely contested and a couple come off the dribble right over defenders.

Jones of Windermere had 18 points and his game seemingly gets better each time out.  He has always been a solid perimeter shooter but his ability to slither past defenders and score at the basket has greatly improved.  He is also a very alert perimeter defender that comes up with more than his fair share of tips and steals at that end of the floor.  The College of Charleston has a good one.