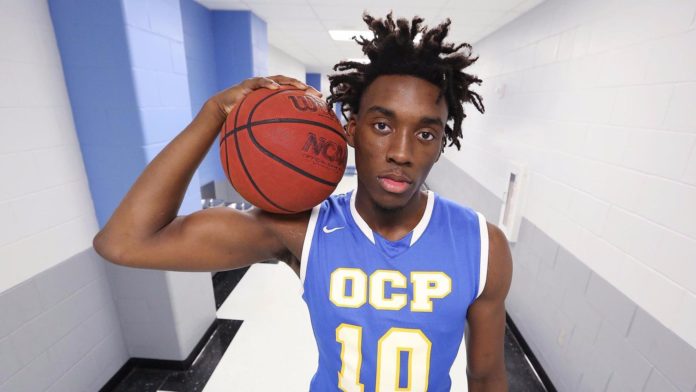 In a contest that pitted the reigning Class 2A and Class 3A champs against each other, it was Miami Christian that came out with the hot hand.  The Victors connected on six shots from beyond the arc, four of those from Miguel Diaz, to grab a 20-17 lead after one quarter of play.  That lead would grow to as much as six at 25-19 at the 5:34 mark of the second period.  At that point, OCP went to work and grabbed their first lead at 29-27 after a three capped off a 10-2 run.  When the halftime horn sounded, OCP was up a pair at 31-29.

Miami Christian was quick to tie the game at 31 at the start of the third quarter.  OCP responded with a 6-0 run to go up 37-31 midway thru the third.  Once again, Miami Christian worked its way back to tie the game, this time at 42 all.  And, you guessed it, OCP responded with a run to increase their lead to 48-42 at the end of the third quarter.  That run would continue at the start of the fourth period and give OCP an eleven point, 55-44 lead with just over four minutes to go until the end of the game.  Miami Christian was unable to rally and OCP took home a 68-56 victory.

Miguel Diaz paced Miami Christian with 17 points, connecting on 5-8 from beyond the arc in the process.  Neftali Alvarez joined him in double figures with 16 points.

“U-School” is currently ranked the #3 team in the country while Osceola, the defending Class 9A champ came in short-handed as 6’9 junior Omar Payne was serving the last game day of his FHSAA suspension for a questionable ejection in a game during the holiday.  That being said, it was Osceola that jumped on top first and led 10-4 at the five minute point of the opening period.  As expected, U-School tied the game a few minutes later.  The score was still tied at the end of the first quarter at seventeen.  A 9-1 spurt to start the second by Osceola forced a timeout by the Sharks.  However, that didn’t faze the Kowboys and with 4:21 left in the half, Osceola led by a dozen at 32-20.  That twelve point advantage would hold up at the half with Osceola on top 38-26.

U-School stiffened their defense in the third quarter and also started to take advantage of their size inside.  The Sharks whittled down their deficit in the period found themselves down only five at 48-43 heading into the fourth.  Things got very interesting and entertaining once U-School took its first lead at 53-52 on a three pointer with five minutes to play.  Osceola would eventually take back the lead at 58-57 but U-School would respond and prevail with an 8-2 run that would find them up 65-60 with just six second left in the contest.  The Sharks held on to win by a score of 66-62.

Osceola’s Josh Marte had 26 points while Jadakiss Soto contributed 11 points and Armani Thomas added 10 points to the cause.

It was already midway thru the third period when we got to the auxillary gym to find Riverdale down 37-29.  They slowly crept back into the contest and at one point got to within four points of Lemon Bay.  However, when senior guard Jacob Tracey had to sit out with back spasms for much of the final quarter, Riverdale’s chances at a comeback took a big hit.  Lemon Bay was able to hold off Riverdale by the score of 63-56.  Lemon Bay’s Tyler Caron led the Manta Rays with 18 points while Jadrian Tracey of Riverdale led all scorers with 24 points.

We got back to the main gym with about three minutes left in the third quarter to find Charlotte up by three at 51-48.  Keyshawn Bryant of Winter Haven already had 25 points at this time while Charlotte’s Makai Reeves had posted 18 points.  Charlotte led 61-54 heading into the final period.  As the fourth quarter moved along, Winter Haven kept chipping away at the lead.  With 21 seconds remaining, Winter Haven connects on one of two free throws, tying the game at 75.  Charlotte’s Spencer Ingle scored at the rim with five seconds remaining.  After a timeout, Winter Haven’s Bryson Birdsong slipped past the Charlotte defense to tie the score at 77 and send the game into overtime.

In the extra session, the led changed hands several times.  With forty seconds left, Winter Haven hit a three to go up 83-82.  Charlotte answered with a Tyrik Gainer bucket with 25 seconds remaining.  Winter Haven missed its shot attempt to re-take the lead and Charlotte rebounded with sixteen seconds to play and called a timeout.  Ingle was fouled quickly and made both free throws to put Charlotte up by three.  Winter Haven was unable to get a good look and Charlotte held on for a big win at him in overtime, 86-83.

Bryant finished with 29 points and while Byrdsong added 28 points.