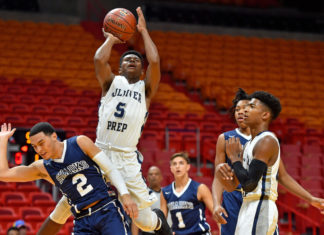 We travelled down to Punta Gorda and Charlotte High School to take in the Saturday action at the Wally Keller Classic.

After the first four minutes of the contest the score was knotted at seven.  At that point, Canterbury put up six straight points and led by five heading into the second quarter at 15-10.  Riverview responded with a 6-0 run of their own to start the period and it would become a back-and-forth affair from there for the rest of the first half.  Riverview held a 23-21 lead midway thru the second but when the halftime horn sounded it was Canterbury back up on top by a score of 30-27

Riverview tied the game early in the third at 32, but Canterbury then peeled off eight straight points forcing Riverview to take a timeout down 40-32 with 5:21 to play in the period.  Riverview was unable to take back the lead in the period and found itself down six, 47-41, heading into the final quarter.  Riverview patiently crept back into the game and with 21 seconds left found itself down two at 55-53 and in possession of the ball.  Riverview turned the ball over before they could get off a good shot.  They immediately fouled Canterbury with three seconds left on the clock.  Canterbury missed the front end of the one-and-one and Riverview immediately called timeout with three seconds left.  Canterbury had fouls to give before sending Riverview to the line, so they used those fouls in order to keep Riverview from getting a good shot off before time expired.  Canterbury would ultimately hold on to win by that 55-53 score.

Malachi Wideman of Riverview led all scorers with 21 points while Tyrus Jackson tallied 13 points for the Rams.

Lakewood Ranch jumped out to an 8-0 lead, with Damien Gordon scoring all of those points.  In fact, Mt. Bethel didn’t score until the 1:15 mark of the opening stanza.  Mt. Bethel was down only six at 12-6 entering the second quarter.  Lakewood Ranch outscored the Eagles 8-2 over the first four minutes of the period as it built a 20-8 lead.  As the quarter went on, the fouls began to pile up for both teams and it seemed like the rest of the period was a steady parade to the foul line at both ends.  Lakewood Ranch certainly made the most of it to lead 35-19 at the half.

Mt. Bethel got to within ten at 38-28 a few minutes into the third quarter.  However, that is as close as Lakewood Ranch would allow them to get.  A 50-35 lead after three quarters of play grew to a twenty point margin with 2:30 left in the game.  At that point, both teams sent in their respective benches.  Lakewood Ranch would prevail by a final score of 61-43.

Lakewood Ranch got 16 points from Gordon and 12 from Keon Buckley.

Mt. Bethel was led in scoring by Coleman Boyd with 12 points.

Gulliver Prep starts five sophomores, albeit all five are very talented.  However, it was an experienced Bartow team that jumped on top quickly, leading 7-2 after less than two minutes of action.  Gulliver Prep got themselves back in the game after a timeout and heading into the second period was down only three at 18-15.  A 5-0 run by GP gave them their first lead at the 6:53 mark and forced a Bartow timeout.  Gulliver built its lead to six with just over three minutes left in the half but Bartow closed out the quarter on a 10-2 run to lead 30-28 at the break.

Gulliver Prep started the third quarter on fire, going on an 8-0 run over the first three minutes of the period to lead 36-30.  Bartow was struggling to find its offense like it had in the first half while Gulliver was not having that dilemma.  After three quarters of play, Gulliver Prep was up eight with the score 46-38.  The fourth quarter found Bartow continue its struggles to score the basketball and consequently Gulliver Prep grew its lead to fifteen at 55-40 midway thru the final period.  Gulliver would go on to win comfortably by eight, 63-51.

It was an impressive performance by Gulliver Prep’s Jamal Mashburn, Jr. as he tallied 31 points to lead all scorers.  No one else on the Raiders reached double figures.

Just as impressive for the Yellow Jackets of Bartow was Jalon Borders and his 27 points.  Joshua Simmons added ten points for Bartow.