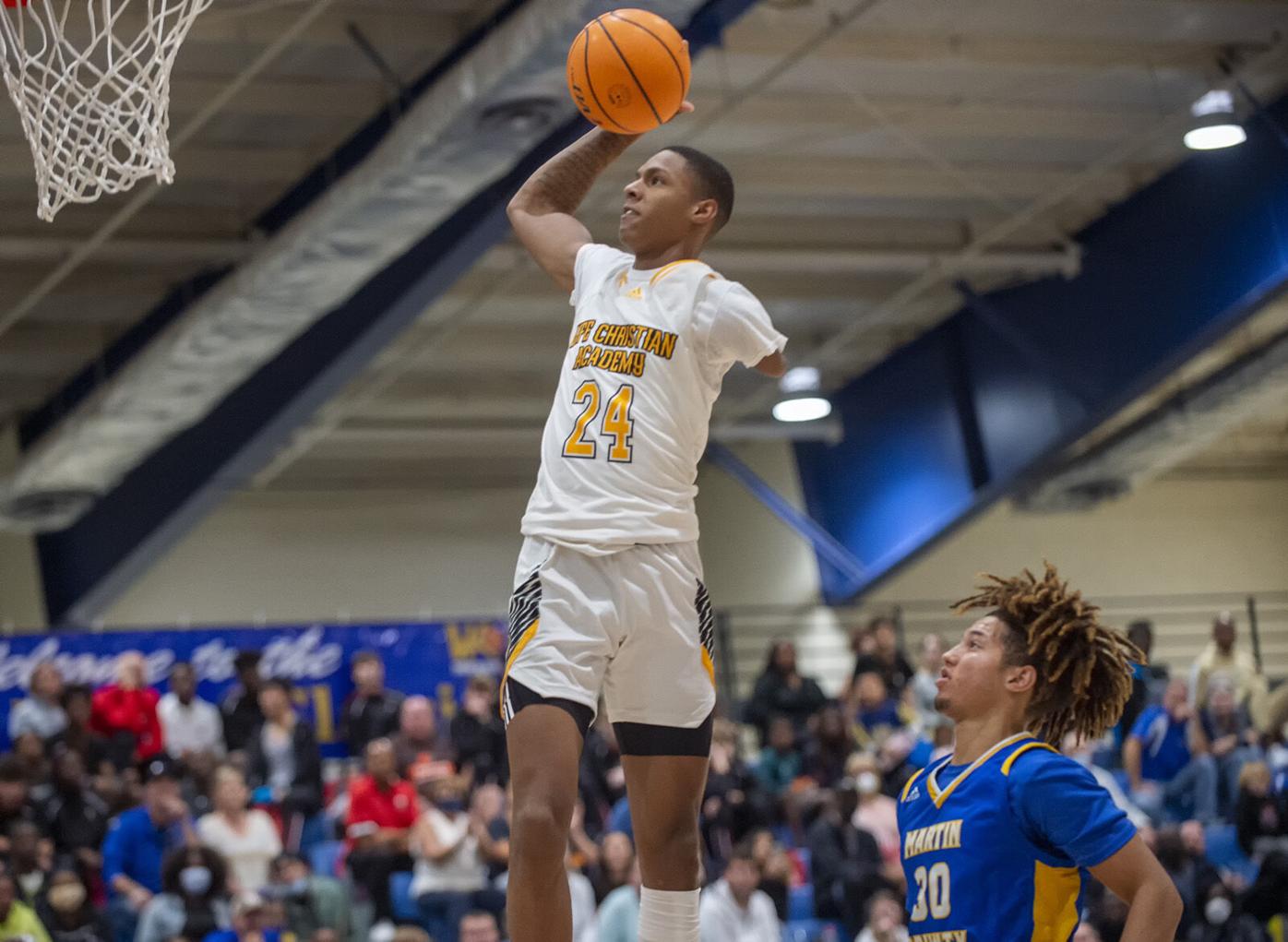 We ventured down to Charlotte High School in Punta Gorda for the 16th rendition of the Wally Keller Classic.  With two gyms and games going on throughout the day, there isn’t any reason to just sit and watch warmups (unless you have access to the hospitality room, then its okay to miss some court action).  We must admit to spending all of our time in the main gym, but by all accounts, there was some quality play right down the hall.

The Eagles of Oldsmar are part of the Sunshine Independent Athletic Association.  They got off to a quick  8-0 start, forcing a Kings timeout after a little more than two minutes of play.  SFCA slowly worked their way back into the contest after that and were down just a point at 16-15 with a couple of minutes left.  However, Oldsmar finished the quarter with a 5-0 run to lead 21-15.  It didn’t take long for SFCA to tie the game at 21-21 in the second period.  Oldsmar responded with a three-pointer but SFCA kept pace and the game was tied at 27-27 midway thru the period.  Similar to the first quarter, Oldsmar closed the half on a run of 7-2 to take a 34-29 lead into the halftime break.

The Eagles began the third period with an 8-0 run, pushing their lead to double-digits.  This time, SWCA was unable to counter and mount a comeback.  Oldsmar was able to maintain that type of advantage and won the game convincingly 73-59.

Braylon Jackson led Oldsmar with 27 points and was named Player of the Game for the Eagles.  Willie Patterson added 16 points while Willie Sheppard contributed 10 points.

For SWCA, Eiram Cuevas scored 12 points and was named Player of the Game for the Kings.  Jaylen White paced the team with 15 points.

Some of the best young talent in the state was on display in this game.  The Crusaders of Tampa Catholic managed to get on top first and stay there, but never by much.  They led by just three, 9-6, midway thru the first period and just four, 16-12, when the first quarter came to an end.  The second quarter was the same as TC maintained a two to six point lead throughout the period.  When halftime rolled around, the Crusaders led 32-38.

The Rams of Riverview finally tied the score at 35-35 early in the third period.  The game continued to see saw back and forth.  The Rams took the lead on a couple of occasions, but TC hit a shot just before the horn to end the third period with a one-point, 51-50 lead, going into the final period.  The fourth quarter continued to be dramatic.  With 1:20 left to play, Riverview scored at the rim to take a 66-65 lead.  Tampa Catholic missed a three on their next possession, but Riverview turned the ball back over.  With forty-one seconds left, Karter Knox of Tampa Catholic made the front-end of the one-and-one to tie the game.  He missed his second attempt, but the Crusaders grabbed the offensive rebound.  Knox found himself with the ball and with two seconds left launched a step-back jumper inside the arc.  The ball goes through the net.  Riverview is unable to get off a shot and TC wins a tight one, 68-66.

TC’s sophomore Knox scored 16 points and is named Player of the Game for the Crusaders.  Freshman point guard Isaiah Campbell-Finch led the team with 21 points.

Jackson travelled much of the state on Friday to play and defeat a nationally-ranked Lake Highland Prep team out of Orlando so there was some question as to how much gas the Tigers would have left in the tank.  The Yellow Jackets of Bartow are young but seemingly improve with each game.  Jackson definitely needed to be on “upset alert”.

For a while that looked to be the case.  While Bartow led just 7-6 with 4:20 left in the first period, the Jackson coaching staff clearly wasn’t happy with the team’s play and called timeout.  The Tigers responded with a 10-0 run to end the first period up 16-7.  Their level of play continued in the second quarter, overwhelming Bartow.  The Yellow Jackets managed just nine points in the quarter and Jackson held a commanding 33-16 lead at the half.

Jackson never took its foot of the gas in the second half.  While a running clock was never in view, neither was a comeback for Bartow.  The Tigers of Jackson kept a twenty-point advantage up until the very end when both teams had sent in subs.  Jackson would ultimately go on to win by the score of 64-47.

Mike Swift of Jackson was named Player of the Game for the Tigers as he led them with 15 points.  Jaden Brill added 10 points.

For Bartow, Kjei Parker led the team with 24 points on his way to being named Player of the Game for the Yellow Jackets.

Out of the frying pan and into the fire for the Highlanders of Lake Highland Prep.  After losing to a tough Jackson squad the night before, they now had to face the top team in South Florida in Pembroke Pines Charter.  The Jaguars of Charter return all five starters from last year’s Class 5A state championship and event though they have moved up to 6A, the team is still considered the favorite.

Not surprisingly, Pines Charter got out of the gate quickly and led 11-4 after the first four minutes.  LHP looked a bit slow after a rough game the previous night against Jackson.  After one quarter of play, Pines Charter led 17-8.  The second quarter found LHP with a bit more energy.  The Highlanders closed the gap to within five, 19-14 with four minutes to play and it felt like the game had finally started.  As the second quarter was winding down, LHP was down just two, 24-22, and feeling confident.  However, just before the halftime horn, Pines Charter hit a three to go up 27-22.

Lake Highland continued to battle uphill in the third quarter.  Down just three at 35-32 with five minutes to play, they called a timeout.  It didn’t work as desired.  Pines Charter finished the quarter on a 9-5 run to extend its lead to seven, 44-37, with one period left to play.  In that final period, Pines Charter milked the clock whenever they got possession of the ball.  Lake Highland found themselves down eight, 51-43, with 4:30 left to play.  They continued to fight and hit some late threes but could never get to the top of the hill.  Pines Charter won by five, 64-59.

Geoff Sprouse of Pines Charter led the way with 16 points and was named Player of the Game for the Jaguars.  Caelum Ethridge and Elijah Wyche each scored 13 points while both Kolby King and Sam Eklamel each added 10 points.

For Lake Highland Prep, Brice Sensabaugh had a game-high 29 points.  Jah Quinones added 15 points and for his efforts he was named the Highlanders’ Player of the Game.

Both teams played and won on Friday night at the Wally Keller.  OCP defeated a tough Norland team while Florida High took down host school Charlotte.  OCP was the first to grab the lead but the Seminoles were never far from reach.  It was just a two-point game, 16-14, after the first quarter.  Florida High hit one of two free throws to start the second quarter.  From there it was all OCP as they reeled off twelve straight points to lead 28-15 with three minutes left in the half.  At the break, their lead was up to fifteen, 32-17.

It didn’t take long into the third quarter for OCP to push their lead into the twenties.  From there, Florida High never really mounted much of a comeback.  The Warriors of OCP won convincingly, 68-42.

A.J. Brown of OCP led all scorers with 26 points and was named Player of the Game for his efforts.  Ven-Allen Lubin added 16 points while Ameer Ramadan contributed 12 points.

For Florida High, Tre Donaldson was named Player of the Game for the Seminoles after scoring 14 points.  Thad Burns helped the cause with 10 points.

The Lions of Life Christian also plays in the SIAA as an independent.  They held a 12-8 lead after the first four minutes.  At that point, the Tigers of Martin County ripped off a 9-0 run and after one quarter of play the Tigers were up by three, 17-14.  Life Christian kept pace with Martin County in the second quarter.  They were within one, 23-22, midway thru the period.  However, just like the first quarter, Martin County got hot at the right time and led 30-24 at the break.

In the third quarter, it seemed like Martin County had an answer every time Life Christian threatened to either tie the game or take the lead.  While the Lions were able to reduce the six point half-time margin, it was only by two points and the score was 44-40 going into the final period of play.  Martin County scored the first four points in the fourth.  Now armed with an eight-point lead, the Tigers decided to milk the clock.  Life Christian was forced to foul and the Tigers made their foul shots.  Compounded the problem for Life Christian was their inability to make almost any kind of shot in the quarter.  The Lions only scored four points in the final eight minutes and The Tigers roared to a 59-44 win.

Hansel Donato earned Player of the Game honors for Life Christian with 13 points.  Braylin Garcia led the team with 19 points.

Ah, if only every high school game could get this kind of community support.  The stands on both sides of the gym were full as were the seats along the baseline.  This is a rivalry that is one of the best in the state.

The home team Charlotte Tarpons got out of the gate fast, leading 13-4 after just four minutes.  Their lead was 17-9 going into the second quarter.  That was the closest Port Charlotte would get all night.  The Tarpons’ lead got into double-digits early in the second quarter and the margin was twelve, 31-19 at the break.

At one point in the third quarter, Port Charlotte trimmed their deficit to ten but Charlotte responded quickly and decisively, making the score 46-30 going in to the fourth period.  The Pirates seemed to lose interest at that point and Charlotte won in an uncharacteristic route for this rivalry by the score of 60-38.

John Gamble led Charlotte with 20 points and was selected as the teams’ Player of the Game.  D.J. Woods added 12 points while Logan Clauser added 10 points.

Alex Perry led Port Charlotte with 14 points and was named Player of the Game.

At one point during the event, I looked across the gym and saw the leaders of the top shoe-sponsored teams in Florida engaging in conversation with smiles on their faces and laughter in their eyes.  If they can do that, then why can’t our political leaders at all levels do the same?