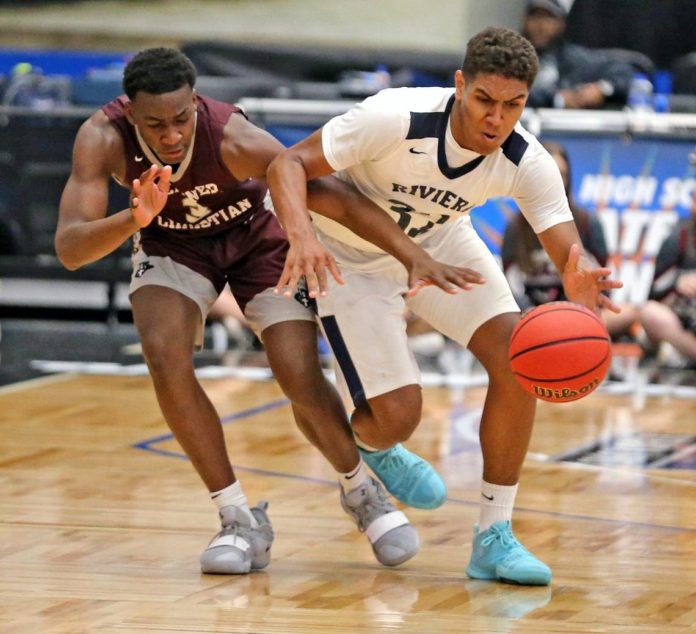 Josh Cecol, Miami Belen Jesuit: The 6’9 rising senior may be the opposite of Sanders from South Miami.  He may not have the physical gifts bestowed upon Sanders but Cecol has a solid knowledge of how best to use his size to get positive results at both ends of the court.  Offensively, he has some basic moves on either block that he uses to score and can step out to fifteen and make shots.  Cecol is a decent passer out of the post and sets a solid ball-screen when stepping out on the perimeter.  Defensively he is a physical presence that challenges shots and Cecol does a solid job controlling his rebounding area.

Andy Chavez, Miami Belen Jesuit: The 6’1 rising junior continues to impress with his consistent accuracy from the three-point arc and beyond. He has a quick release to get the shot off in tight spaces and the ball always looks like it is going in.  Chavez won’t blow by defenders off the dribble but he is smart enough to know how to get to where he needs to go against defensive pressure.  He is a willing post passer and is quick to move the ball along the perimeter to open teammates.  We also like how he plays at a controlled pace regardless of the game’s tempo.

Scottie Middleton, Miami Senior: Not yet in high school, the 6’4 Middleton got on the radar this weekend.  Not only does he have excellent size to play anywhere along the perimeter, he also has a solid skill set at this point in his development.  Middleton’s perimeter shot lacked consistency due to its release and rotation, but overall the fundamental mechanics are in place.  He appears to be a competent ball handler and an effective driver and finisher at the rim.  Middleton has the physical tools to be a solid perimeter defender over the next four years and beyond.

Ian Tajelli, Coral Springs Charter: The 6’5 rising senior has a reputation as a three-point sniper and he did nothing to disprove that this weekend.  Tajelli was more active than we have seen him in the past when it came to rebounding the basketball, getting out in transition, and attempting to score off the bounce.  By diversifying his scoring skills and keeping the defense off-balance, Tajelli becomes a more interesting recruit.

Thaddeus Squire, Fort Lauderdale Stranahan: The 6’5 rising junior impressed with an infectious enthusiasm and energy when on the court.  He’s a bouncy athlete that loves to beat the defense to the basket, whether it is to score the ball or retrieve a missed shot.  Squire did show some skill level with a couple of nifty passes for assists and knocking down a three but it is clear that not only does he have work to do in upgrading his skills but also that he is willing to put in that work.  No doubt that Squire will be a key cog for Stranahan to defend its state title this coming season.

Osmar Garcia, Miami Riviera Prep: At 6’6 with a solid frame and strong build, Garcia is physically advanced more than his class of 2023 counterparts.  He can have a major impact on a game in many ways.  Garcia ran the floor for scores, finished tough shots inside, made clutch free throws and found teammates for easy baskets against pressure.  While he didn’t shoot any perimeter jump shots in that game, Garcia did appear comfortable handling the ball on the perimeter and in the open floor.  His development, not just skill-wise but athletically, will be intriguing over the next four years.

Martin Mercedes, Boyd Anderson: A 6’1 rising senior, he was the toughest individual player on a collectively tough Cobra squad.  Mercedes connected on open threes, finished as the basket, and was a reliable ball-handler versus pressure.  He also was an aggressive defender and played with a chip on his shoulder.

Gabe Taylor, Miami Palmetto: A 5’9 rising senior, Taylor will be playing his first and only season with Palmetto and if his play on Saturday is any indication, he will make an enormous difference.  As one might expect, he has speed and quickness with the basketball and loves to push the pace.  Taylor also has excellent court vision and a high hoops IQ as he routinely created openings for teammates to get off uncontested shots.  While he didn’t knock down any three-point shots in the game we watched, Taylor was proficient at coming off of ball-screens and connecting from mid-range if that was the right read.