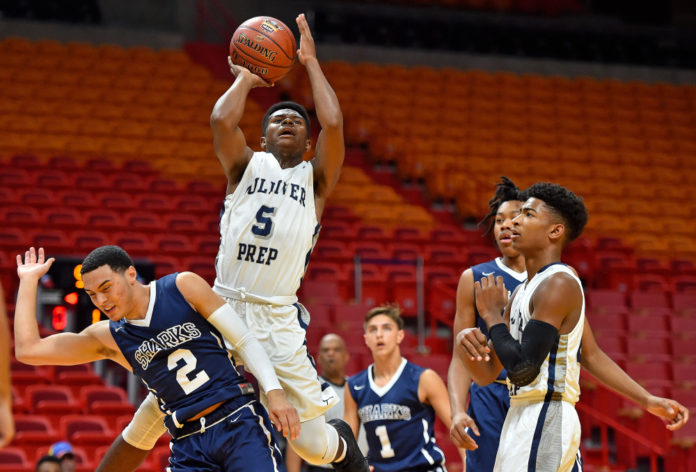 We didn’t do too bad on our regional first-round picks nailing 13 out of 16.  Both Calvary Christian and Booker T. Washington shot down our “playing at home” theory while Oasis Charter got a home win as well as some much-earned respect.  Sadly, there were more than a few games that were blowouts as U-School, Tampa Catholic, Melbourne Central Catholic, Raines and Gadsden County won by an average score of 75-42.

Best Matchup: Coral Springs Charter on the road at Oxbridge Academy is an enticing matchup.  On paper, both teams have comparable records and strength of schedule numbers.  Oxbridge is seeking its first trip to Lakeland after losing to Kevin Knox and Tampa Catholic the last two years.  They have a big hurdle to get over in Coral Springs Charter.

Best Chance for an Upset: Lake Highland Prep at Ocala Trinity Catholic has a higher ranked team on the road in a tough environment against a team that is finding its stride at the right time.  The winner of the contest will get the regional final at their place so that gives Lake Highland added incentive.

Raines over The Bolles School

Uggh.  We went a brutal 11 for 16 in this classification.  Both Tallahassee Godby and Jacksonville Ribault went on the road and each won three point games.  In Southwest Florida, district runners-up Bayshore and Cape Coral Mariner defeated each other’s district winner.  We had mentioned that the Gibbs/Mariner game was the best chance for an upset but we failed to heed our own advice.  In South Florida, a young Suncoast squad dispatched an experienced and talented American Heritage team, albeit by a narrow two point margin.

Best Matchup: Rockledge at Leesburg has all the makings of a tremendous highs school game.  The game should feature excellent guard play, an uptempo pace on offense and ferocious full-court defense.  If Leesburg is to defend their state title, this may be their stiffest challenge.

Best Chance for an Upset: Ridgewood travels to Brooksville Nature Coast in what should be a very even contest.  Both teams have 24 wins on the season and similar strength of schedule.  Nature Coast has been near-unbeatable at home so Ridgewood certainly has a challenge in front of them.

Another 11 out 16 is really a downer.  Crestview won big on the road in the Panhandle while in Central Florida both Lake Gibson and Mainland took out district winners.  Cape Coral was another winner out of Lee County while Doral Academy in Miami held off a highly regarded Carol City team to advance.  Our best chance for an upset in Mainland at Auburndale turned out to be prophetic but we held to our “home team” theory and ignored that advice.  Doral’s win over Carol City was by a mere six points, one of the closest of the night.  Surprisingly, in the classification there were a number of blowout wins.  Choctaw, Gainesville, Northeast, and Norland all won by 30+ while seven other games had double-digit margin of victory.  That’s eleven of the sixteen games played but that’s what you get with too many classifications.

Best Matchup: Northeast once again takes on Boyd Anderson and this time its loser goes home.  Both teams know each other very well and this game should be intense.  BA brings more size to the floor but Northeast counters with aggressive guards that can shoot or get to the rim.    Wish we had the cloning machine working so we could get to this one!

Best Chance for an Upset: On paper, Doral and Norland is one of the closest games to be found.  Norland has a much better strength of schedule and is near omnipotent at home.  At 27-2, Doral Academy is no fluke and if the Vikings don’t come in with the proper attitude, they’ll pay for it.