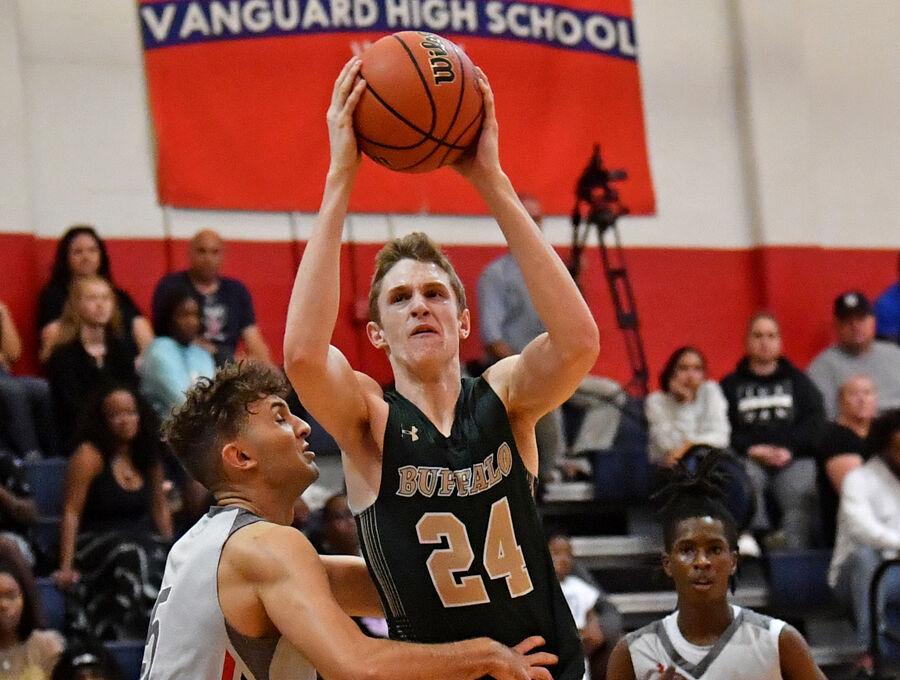 The Generals were a young group last season and lost a heartbreaker in the region finals.  Their top nine scorers return from last year and there is a sense of “unfinished business”.  Dominick Scott, a 6’5 senior, led the way with twelve points and six rebounds a game last year.  Montez Dunson, a 5’10 senior, averaged ten points and six assists a contest.  Antonio Harrison,a 6’3 senior, Na’Jai Moody, a 6’4 senior, and Tahj McClain, a 6’5 senior, were key contributors last season.

Columbia is looking to get back into the playoffs after missing out on the fun last season.  Issac Broxley, a 6’1 senior, led last year’s team averaging just over seventeen points per contest.  A trio of guards, 6’1 senior Amare Ferrell, 6’3 senior Ty Wright, and 6’1 junior Jerome Carter each averaged seven or more points a game last year and at least one of them will need to double that output for Columbia to make noise. The rest of the club should provide enough athleticism and scoring support to put Columbia in the mix for a trip to Lakeland.

Ponte Vedra reached the title game in 6A last year.  The Sharks lost three key seniors from that run but will use their Princeton-style offense to keep opponents off-balance.  Nathan Bunkosky, a 6’0 senior, averaged just shy of ten points a game last season.  No doubt he will shoulder a much greater scoring burden this season.  Israel Nuhu, a 6’4 senior, and 6’0 junior Sam Ritchie, are “next man up” in this program.

Fletcher reached the region semis last season and will no doubt miss the scoring and versatility of graduated Lajae Jones. Still, Fletcher returns three of its top five scorers from last season and that experience should be valuable.  Fletcher will need a “by committee” approach and have different guys step up at various points of the season.  Juan Bruce, a 6’2 senior, Marquis Ghee, a 6’5 senior, and junior Pop Bullard are the likely candidates.

This program from Duval doesn’t have much tradition nor success on the basketball floor but this young and athletic group could change that.  Keron Jackson, a 6’5 sophomore, has the ability to play every position on the floor and will likely do so.  He excels and slashing and scoring at the basket but is also a fine passer that will find open teammates for easy shots.  Michael Watson, a 6’2 sophomore, is a tremendous athlete that is excels in the open floor.  He puts that athleticism to good use on the defensive end, forcing a lot of turnovers and converting many into easy baskets.  Zion Kemp, a 6’7 junior, patrols the paint, is an active rebounder and shot challenger, and will take the ball hard to the basket when given the opportunity.  More than just those three will need to come through for Ed White to challenge in the post season, but the talent base is there.

Always a contender, Providence is still quite young.  Mason Lee, a 6’5 senior, is a sharp shooter on the perimeter.  He will stretch the defense and will allow others to either work inside or attack the basket.  Chris Arias, a 6’5 junior, recently committed to Jacksonville University.  He is very effective at playing both guards spots.  Arias has range past the arc, finishes creatively in a crowd at the rim, and finds open teammates both in transition and in half-court sets.  Jaylen Robinson, a 6’6 combo forward, is a high-level athlete with strength that can score inside or out.  Providence always plays a tough schedule to prepare them for the playoffs and this year will be no different.

If size matters, then The Villages Charter should have a great deal of success.  Their frontline should go 6’9, 6’8, 6’7, and while two of those guys are just freshmen, they don’t play like it.  It starts with 6’9 senior Sam Walters, an Alabama commit and one of the big surprises of the summer.  It may be hard for Walters to replicate his incredible junior season which saw him average over 24 points a game, grab ten boards a game, and shoot 50%+ from the field, 40%+ from three, and 80%+ from the foul line.  To combat a lot of likely double-teams, he’ll get help from a pair of promising freshmen.  Chris Washington, 6’8, is quite skilled and athletic but still has an incredible amount of upside. Kymani Weathers, 6’7, has great touch around the rim, can step out and score, and is dynamic on the glass.  If the Buffalo can take care of the basketball and get it to one of the big three, it wouldn’t surprise to see them cut down the nets.

NFEI made it to Lakeland last year only to fall in an incredible game to Sagemont out of Weston.  Isaac Tevarus, a 6’3 senior that put up 40+ in that game, returns.  He’ll get help on the perimeter from 6’2 senior Tommie Hall, an active slasher and defender, as well as 6’2 junior Juan Babista.  A pair of juniors, 6’6 Leano Rolle and 6’9 Ordaine Clahas, will grab rebounds, protect the paint, and challenges shots.

Bradford won the Class 1A state title last year.  Had they not been re-classified to 3A this year, the team had a solid chance to repeat.  As it stands, Bradford is still one of the better “small school” teams in North Florida this season.  Shayne Davis, a 6’2 senior, plays a rugged, physical brand of ball.  He leads the point of attack at both ends of the floor.  Chalil Cummings, a 6’2 junior, is crafty, versatile, and does a little bit of everything to get Bradford into the win column.

We are going to take a “little birdie” at his word that something special is brewing west of Ocala in Levy County.  Greg Maxwell, a 6’2 combo guard has come over from Ocala Trinity Catholic and his skills and talent look to give Williston a real chance at the 1A title.  Kyler Lamb, a 6’2 junior, averaged twelve points and five rebounds a contest last year.  J.T. Lipton, now a freshman, averaged fourteen points a game as an eighth grader for the Red Devils.

Sam Walters, The Villages Charter: As mentioned earlier, the 6’9 senior has committed to Alabama.  Walters fits the prototype for today’s player as he can step out and make threes consistently but also has a good touch around the basket.  He takes and makes good shots, draws fouls, and converts from the foul line at a high rate.

Issac Tevares, Jacksonville North Florida Educational Institute: The 6’3 senior simply has an uncanny knack for getting to the basket and scoring in a crowd.  He slithers through defenses and uses great body control and touch to get the ball in the hoop.  Tevares’ jumper continues to improve and he can be quite disruptive in the passing lanes.

Dontrell Jackson, Alachua Santa Fe: The 5’10 senior is a clutch performer that makes big shots.  Very quick, he has an “old school” mid-range game and makes his teammates better.

Greg Maxwell, Williston: Maxwell combines high-level athleticism with a good skill level.  He can play either guard spot, knock down perimeter shots, and score at the basket.  Maxwell rebounds well for his size and aggressively guards opposing ball-handlers.

Chris Arias, Jacksonville Providence: The 6’5 junior had an excellent summer and his recruiting profile shot way up.  He sees the floor well and delivers quick, crisp passes to teammates for open shot attempts.  Arias is tough to guard in ball-screen situations with his ability to knock down shots or find the open man.  When playing off the ball, he moves well off screens and is always shot-ready.

#1 Sophomore: C.J. Ingram, Hawthorne: At 6’5, Ingram does more than just a little bit of everything for Hawthorne.  He can often be found playing point guard where Ingram creates scoring opportunities for himself and others.  Ingram is also a grab-and-go rebounder that pushes the pace.

#1 Freshman: Chris Washington, The Villages Charter:  Skilled and athletic, Washington gets to the rim quickly, skies for rebounds, and has a respectable perimeter shot.  He plays with great energy at both ends of the floor and will challenge shots at the rim as well as disrupt the passing lanes.

Senior Sleeper: Shayne Davis, Starke Bradford: The 6’2 senior uses his strength to overpower opposing defenders, get to the basket, and make plays for his team.  He will get others involved but when it is crunch time, he is the one to step up.  He spearheads the attack at both ends of the court.