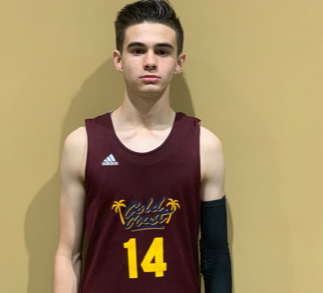 Keanu Calderon, 1 Family 17U: While we didn’t get to see him play a full game, it certainly doesn’t take that long to see that the 6’6 wing from Jacksonville Potter’s House is a talented player.  Calderon is quite skilled with the ball, controlling it well in traffic and delivering passes with touch at the right time.  He scored from all three levels while we watched him for a brief period.  His length and leaping ability allow him to contribute in the rebounding department and when the mood strikes he can be a disruptive defender.

Denzel Aberdeen, Team Parsons 2022: Aberdeen looked very solid playing up a couple of levels.  The freshman at The First Academy in Orlando pushed the pace, made good decisions on the move, and scored when given the opportunity.  Though slight of frame, he is quite quick and crafty with the basketball, able to get to wherever he needs to go on the court.  He has range to the three point line on his shot but also has a nice floater in the lane to complement his perimeter shooting.  Aberdeen is a decent defender now thanks to determination and quickness, but he will be better once his frame fills out and he gains strength.

Jordan Lopez, Gold Coast 17U: Hailing from a basketball family, the 6’3 junior from Miami Palmetto did the family tradition proud in the contest we watched Saturday morning.  A dangerous outside shooter, Lopez gets his shot off quickly and it goes down with consistency.  Lopez showed a knack for pulling up off the dribble and knocking down mid-range shots before his defender could react.  He is quick to transition from defense to offense and often found himself with open layups.  He’s got the pedigree, skills, and potential to play at the next level.

Alex Shields, Game Speed Elite 17U: The 6’2 guard from The First Academy in Orlando is strongly built and very confident at the offensive end.  He was 3-6 from beyond the arc in the game we watched, one of those included a free throw for a four point play.  Thanks to his physicality, Shields helps a great deal when it comes to rebounding the ball at both ends of the floor.  Not just a shooter, Shields doesn’t shy away from attempting to overpower his defender and attack the basket off the dribble.  Defensively he puts in effort and is quick to rotate over as a help defender.

Emmanuel Maldonado, 1 Family 16U: The 6’2 sophomore out of Downey Christian in Orlando continues to have a solid spring.  He has developed very good chemistry with his teammates and routinely delivers lobs and look away passes for easy baskets.  He looks to advance the ball quickly, whether via the pass or the dribble, at every opportunity.  His three point shot selection can sometimes be questionable (too far out) but he makes enough of them that he stretches the defense.  While he can certainly improve his defensive footwork and have his hands be more active, Maldonado does have good instincts and anticipates well when the ball comes into his area.

Myles Stewart, Q6 All-Stars Elite 16U: The rangy 6’5 wing from Orlando Lake Highland Prep had a solid shooting game, going 3-5 from behind the three point line in the game we watched on Saturday.  He’s got some length to him but one can tell by his movements that he is still getting used to his body.  Still, that doesn’t keep Stewart from rebounding the ball in traffic or using his wing span to deflect, tip or steal balls that come into his defensive area.  He also handles the ball well and was used quite a bit by the team to help relieve full court defensive pressure.  As he gets stronger, he will most likely become more confident in challenging the defense off the dribble and attacking the basket to go along with his ability to make perimeter shots.