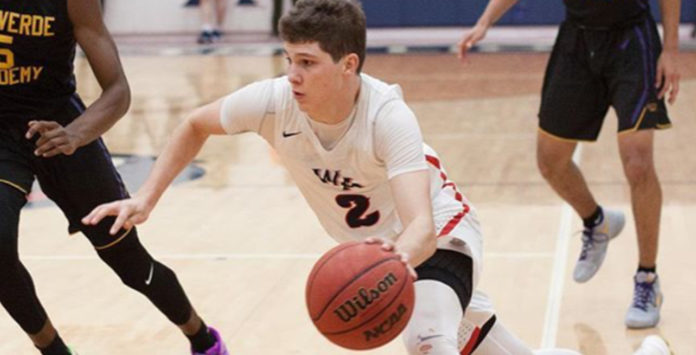 The final day of the 2019 Montverde Academy Invitational kicked off at noon with the seventh-place contest between The Villages vs. Westminster Academy.  Tre Mann of The Villages was held out of competition due to a sore back.

A three by Westminster’s Chase Johnston kicked off the scoring but that was promptly answered by a three from the Villages’ Terry Ivery.  Another three from Ivery and one from Brandon Farmer gave the Villages a 9-3 lead with just over six minutes left in the quarter.  Westminster was quick to tie the game with two free throws from Stephan Dibongue and a four point play from Johnston.  The teams would continue to battle back and forth until the 1:26 mark with the score tied at eighteen all.  Westminster would finish out the period on a 6-0 run with Sam Griffin knocking down one of his patented mid-range jumpers and Johnston scoring on a floater in transition and then converting two technical foul shots to give the Lions a 24-18 lead after one period of play.

Westminster scored the first bucket of the second quarter, but The Villages responded with a free throw and later a three point bucket from Farmer to get to within four at 26-22.  Westminster then ripped off an 11-0 run with Johnston scoring six of those points.  The Villages now found themselves down 37-22 with 3:33 to play in the half.  The Villages regrouped after a time out and made a run of their own to get within eleven at the half, 45-34.

A three from Ivery got The Villages going to start the third quarter, but Johnston answered with a three for Westminster.  A three point play from Peyton Williams of The Villages got the Buffalos to within eight at 48-40 and they looked to have some momentum going.

Nothing could be further from the truth.

Westminster erupted with an 18-0 run with Johnston scoring fourteen of those points.  Johnston had been torching The Villages the entire game, and at the 3:11 mark of the third, he had 43 points compared to The Villages 40!  With 2:30 left in the third quarter, Westminster’s lead was now 66-40.  The Villages finally righted the ship, outscoring Westminster 8-2 for the rest of the quarter but the damage had been done as the Lions led 68-48 with one period left to play.

The fourth quarter was anticlimactic as the only thing left to see was just how many points Johnston would finish with.  He converted a thee point play to reach fifty and twenty seconds later knocked down a pair of free throws to finish with 52 points!  Westminster would go on to win by the final score of 93-70.

As one might have guessed, Johnston led Westminster with 52 points (his career high is 61, coming two years ago against Zion Lutheran).  Griffin finished with 14 points while Dibongue added 10 points.