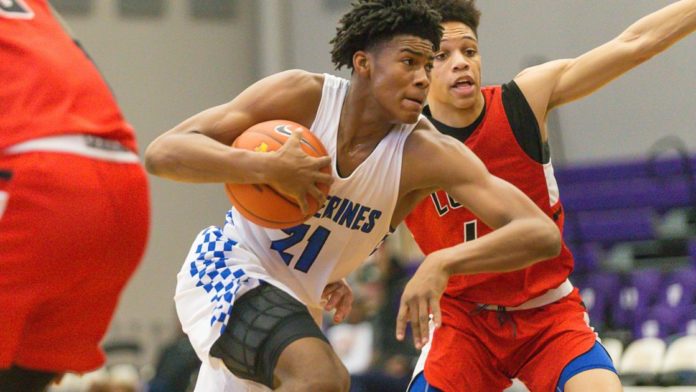 Wasatch Academy came in ranked #5 in the country and undefeated before losing to Rancho Christian out of California in the semi-finals last night.  Vashon has played a national schedule, most notably participating in the City of Palms Classic prior to Christmas.  This is expected to be a serious test for both teams.

Wasatch scored first with a bucket inside from Mady Sissoko.  Vashon’s Cam’Ron Fletcher answered with a baseline drive and jam to get Vashon on the board.  That was the beginning of a back-and-forth first quarter where the score was tied five times and the lead changed hands three times.  At times there was periods of ragged play on both sides.  With the score tied at eleven with two minutes to go, Wasatch scored the final four points of the quarter: a driving basket from Tre Williams and a dunk inside with two seconds left from Sissoko to lead 15-11.

The second quarter began with multiple turnovers and missed shots from both squads.  It wasn’t until Mario McKinney of Vashon hit a three at the six minute mark that the scoreboard changed.  Like in the opening quarter, scoring was hard to come by for both teams.  With 3:31 left in the half, Vashon had a one point, 20-19 advantage.  Wasatch then scored five straight points as Sissoko put down a lob and Tristan Enaruna made one of two free throws then scored inside for a 24-20 lead.  Vashon had an answer with two free throws from McKinney and a bucket inside from Kobe Clark.  Richie Saunders of Wasatch grabbed the lead back with a baseline drive and score to end the half with Wasatch up by two at 26-24.

A pair of free throws each from Wasatch’s Mike Saunders and Sissoko to push their lead to 30-24 early in the third quarter.  Vashon would answer and get back to within two on a couple of occasions.  Finally, with under six minutes to play, Vashon tied the score at 32 with a baseline floater from McKinney.  After a Wasatch turnover, Clark of Vashon converted to give them a three point lead.  Vashon maintained that lead until Sissoko put back a miss to tie the score at forty-one with two minutes left to play.  At that point, Wasatch went dry and Vashon got a three from Recko Baily and a putback just before the buzzer by Cyrus Alexander to take a 46-41 lead into the final quarter.

Vashon’s Fletcher hit a three to start the period and give the team it’s largest lead at 49-41.  Wasatch shaved that margin to five after hitting a pair of technical foul shots and one of two free throws after a foul inside.  From there, Vashon went on a 7-0 run as McKinney converted a three point play and both Chanze Carusoe and Phillip Russell scored on drives.  Now the score was 56-44 in favor of Vashon with just over three minutes remaining.  Time was now the opponent for Wasatch.  Vashon used their superior speed and quickness to run clock and Wasatch was forced to foul.  Vashon would extend their lead at the free throw line and go on to win by twelve, 70-58.

Vashon was led by Fletcher with 19 points.  McKinney finished with 15 while Nathaniel Norman added 11 points.