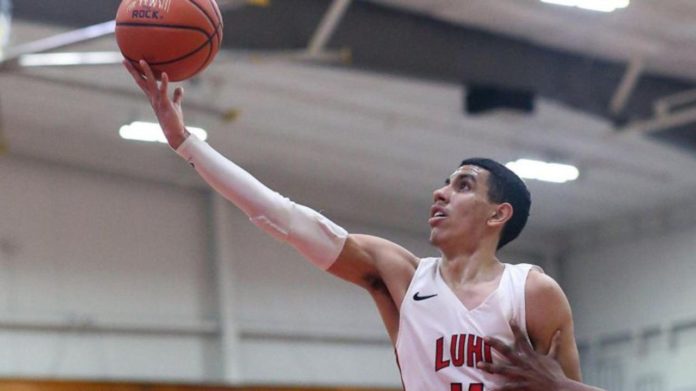 Long Island Lutheran has become a national program over the past couple of seasons.  They fell to Vashon out of St. Louis in the first round and were still mad about that heading into this game.  New York teams play with a thirty-five second shot clock so Lutheran is used to playing at a fast pace.  Miami Christian has no problem with that.

Lutheran scored first on a drive from Tyler Stephenson-Moore.  Miami Christian’s Algenis Quintana answered quickly with a floater in the lane.  Lutheran then went on a 9-2 run with Yoro Sidibe scoring six of those points to make the score 11-4 with just under four minutes to play in the quarter.  Diego Rivera got Miami Christian back on track with a driving basket but Lutheran continued to score with seemingly little resistance, especially Andre Curbelo, as he had four straight points to push Lutheran’s lead to 17-9 with two minutes to go.  Miami Christian would get the deficit to six by the end of the first quarter with the score 19-13.

Quintana scored the first points of the second quarter to bring Miami Christian to within four early on.  After and exchange of baskets to make the score 21-17, Lutheran went on a 12-3 run as Miami Christian struggled with the press.  Curbelo scored six of those and with 4:35 left in the half, Lutheran was up 33-20.  Miami Christian was able to stay even from that point with Lutheran up to the two minute mark.  At that point, with the score 41-29, Lutheran outscored Miami Christian 7-3 the rest of the way to lead by sixteen at the break, 48-32.

Lutheran was quick to put the game away in the third quarter with an 11-3 run to make the score 59-35 with just under six minutes to play in the period.  It seemed that no matter what changes Miami Christian made on offense, defense, or the personnel on the floor, Lutheran had an answer.  With one quarter left to play, Lutheran led 72-48.  The only question was if a running clock would come into play.

Thankfully, that didn’t happen.  However, Lutheran would reach the century mark on a three from Paul Jordan with 1:05 left to play.  Lutheran would go on to win by the score of 100-62.