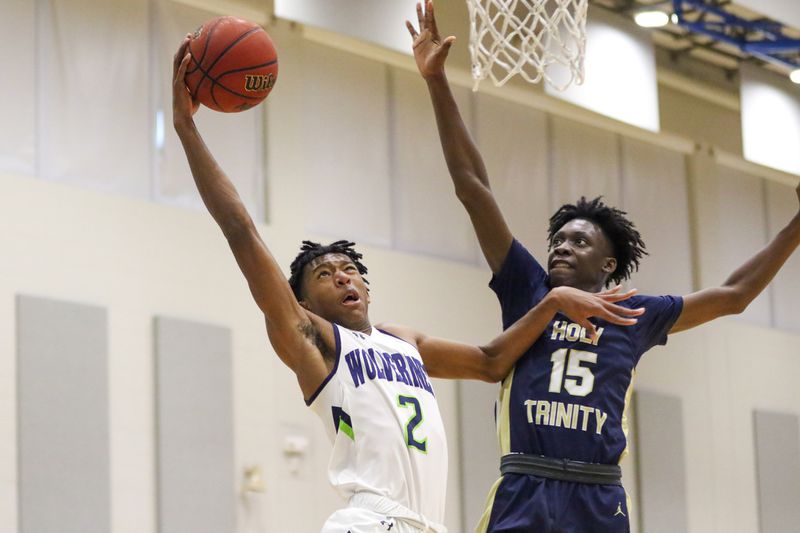 Two of the top teams in 7A and Central Florida clashed when Apopka came calling on Windermere.  Apopka has played well since returning from a COVID-imposed break earlier in the season.  COVID would impact this contest as well.  Sean Stewart, a 6’8 sophomore and key player for Windermere, was out due to the virus but will be back by this weekend.

Prior to the contest, Windermere held a classy salute to the late Earl Graham.  A long-time youth coach and mentor in Orlando’s basketball community, Graham was a victim of COVID just after Christmas.  Other schools in the area have done similar tributes to a man that was much-admired and will be greatly missed.

A steal and score by Windermere’s Kanye Jones got the Wolverines on the board first.  Apopka responded with an 8-0 run, six of those coming on back-to-back threes from John Latimer.  Windermere took a time out to try to halt Apopka’s momentum but it didn’t work.  The Blue Darters increased their margin to ten, 15-5, with just over two minutes left in the opening quarter.  Windermere finally found its footing, closing the gap to eight at 18-10 heading into the second quarter.

Apopka grew its lead back to ten, 24-14, by the four-minute mark of the period.  Once again, Windermere climbed back up hill.  The Wolverines would outscore Apopka 12-9 over the remainder of the second to trail by seven, 33-26, heading into the break.  Latimer had seventeen points for Apopka while Jones of Windermere had eight points and senior teammate Trey Moss had ten points.

Apopka was able to keep a two to three possession advantage on Windermere for the first four minutes of the third period, leading by five, 41-36.  However, one could sense that momentum was building for the home team.  Both Jones and Moss were finding the range from behind the arc and Apopka was having ball security issues.  A 5-2 run to end the third quarter brought them to within two points, 43-41, going into the final period.

It didn’t take long for Windermere to seize the lead.  In fact, the Wolverines went on a 10-0 run over the first 1:30 of the quarter, forcing the second of Apopka’s two timeouts during the run.  The Wolverines led by nine, 56-47 at the four-minute mark and were very much in control.  Down 65-54 with 1:13 remaining, the Blue Darters emptied their bench to give the reserves some run.  Windermere would go on to win by a final score of 67-54.

Windermere was led by Jones with 24 points and he went over the 1,000 point mark for his high school career.  Moss finished with 22 points while Chris Nurse contributed 12 points, 10 rebounds and 3 blocks.

Latimer led all scorers with 26 points for Apopka.