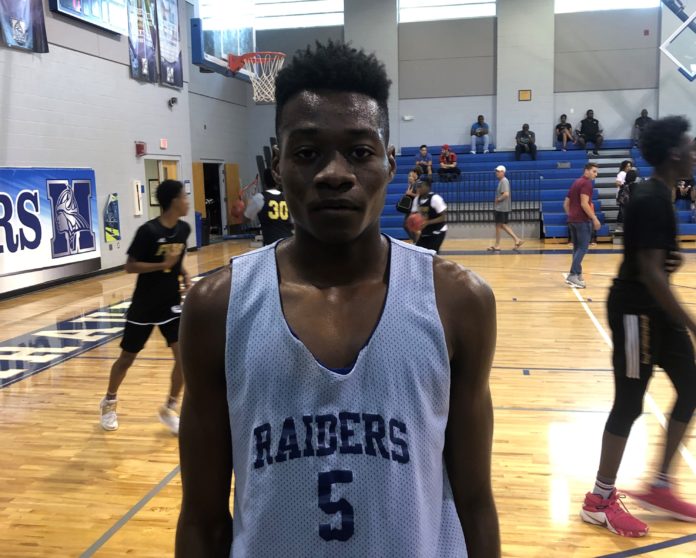 Harrison Owens, Brookwood: The 6’4 rising senior did a little bit of everything this past weekend.  Another player that would be an ideal catch for high-end academic schools at the D-III level, Owens can play multiple positions thanks to his skill level, solid frame, and high basketball IQ.  He was excellent in moving without the ball, finding open teammates with quick passes, and scoring both in the lane and out on the perimeter.  Owens rebounds his area well and is quick to rotate and help on the defensive end.

Desmond Green, Wakulla: The primary ball-handler for Wakulla this weekend, Green is at his best when he can get downhill and attack the basket as he finishes well in traffic.  He is fast with the ball in transition and puts a great deal of pressure on the defense to quickly change ends.  Green shoots the ball ok when given some time and space from beyond the three point line.  When he puts in the effort, he can be a pesky on-ball defender.

Blaise Wallace, Maclay: The 6’4 rising freshman showed a lot of promise this weekend.  Being a good athlete with a decent frame that plays hard every possession is a great starting point for any incoming player.  His shot mechanics are good, so even though his jump shot attempts (and makes) were few and far between, Wallace will certainly improve in that area sooner rather than later.  He handles the ball okay and can attack the basket with a couple of dribble from the high post or short corner.  Wallace battled well on the boards against older and stronger opponents this weekend.  Supposedly a good soccer player, that will certainly help in his defensive development over the next few years.  He’s definitely a member of the 2023 Class to keep an eye on.

K.J. Taylor, Rickards (pictured above): The 6’1 rising senior was one of the main revelations of the weekend.  He shot the ball very well from the perimeter, making several shots well past the arc.  Taylor made shots both off the catch and when coming off ball screens.  He played plenty at the point guard spot and did a solid job of taking care of the basketball and for the most part was unfazed with traps and double-teams.  Taylor has a generous wing span and plays “taller” than his 6’1 size.  He covers a lot of ground quickly on the defensive end and contributes well in the rebounding department.

Jaylin Martin, Florida High: At 6’5 with a good deal of strength and athleticism that will only grow as he gets older, this rising sophomore showed this weekend that his is as much about production as he is potential.  His overall skill level is pretty good right now but we can see him becoming a more effective scorer when attacking the basket and shooter from the perimeter with normal development over the next couple of years.  Right now he is at his best in the open floor as he finishes above the rim and is a frequent target of lobs in half-court settings.  Martin looks to be one of the better players in the state in the Class of 2022, both now and in the future.

Jalan Black, Crossroads: The 6’3 rising senior only played on Sunday this past weekend but in the one game we saw him play he certainly stood out.  A strong athlete with speed and quickness, Black scored at the basket in traffic, was quick off the floor to rebounds, and covered a lot of territory on the defense end.  The big surprise was his shooting skills from beyond the arc, knocking down four in his six attempts.  He was an All-Big Bend selection last season by the Tallahassee Democrat and he showed why this past weekend.

Brandon Garcia, Miami City Ballers: You can tell that the 5’10 rising freshman has been playing against older competition for a while.  He was very comfortable handling the basketball against pressure and wasn’t overwhelmed by stronger guards on either end of the floor.  Garcia’s best attribute is his quick release on his shot which we expected to go in every time he shot the basketball.  He will be one to track over the next 4 years.

Jonathan Acevedo, Miami City Ballers: A 5’9 rising sophomore, Acevedo’s game is predicated on his speed and quickness.  He pushes the pace at every opportunity and gets to the basket with quick change of direction dribbles.  Acevedo can sometimes go too fast and not always complete the play but that should get better in time.  On the defensive end, he racks up a lot of steals with his speed to the basketball and he has long arms with which to disrupt the opposing ball-handler.