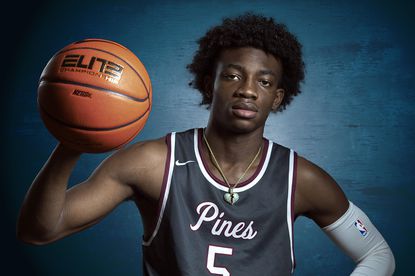 Last Thursday night was a WHOLE LOTTA crazy!  There were upsets galore and in Region Two, none of the home or top four-seeded teams made it out alive.  Let’s start in Region One, where Neptune Beach Fletcher defied the odds by taking a near seven-hour drive to the far end of the Panhandles to defeat Gulf Breeze by two points.  In a chaotic Region Two, arguably the biggest upset of the day regardless of classification was eight seed Lakeland Kathleen visiting district rival and top seed Bartow and winning by seven.  Bartow had come such a long way from a season-opening fifty-point loss to Orlando Olympia to become a one seed.  It wasn’t a surprise that #5 Lakeland and #7 Winter Haven were able to go on the road and defeat much lower-ranked teams.  Wekiva’s four-point win on the road at Melbourne suggests the Mustangs are starting to peak at the right time.  Region Three was nearly as crazy, with three road teams grabbing victories.  Palmetto snuck out of Immokalee with a one point win while both Wiregrass Ranch and Sumner surprised with not only wins but double-digit wins on the road.  Region Four was the only one to go “status quo” as the favorites, whether at home or on the road, won.  All that chaos left us at 9-6 with our picks.  We somehow neglected to pick the Winter Haven/Orlando Edgewater contest.

Best Matchup: Pick either of the two games in Region Four and you won’t be disappointed.  Both feature a pair of district rematches.  On one side you have #1 Pembroke Pines Charter vs. #4 St. Thomas Aquinas.  On the other side, #2 Martin County faces #6 Dwyer.  Would have been nice for this to be a pair of state semi-finals, but that isn’t how the brackets are set up.

Best Chance for an Upset: Looking at the respective matchups, the only upset alert might be for Fleming Island.  Fletcher actually has a higher class ranking than Fleming Island, thanks to some FHSAA-imposed forfeits and could sneak another one out on the road.

Ahhh, back to normal.  Surprisingly, we had our best record of the seven classifications in this one.  We finished 15-1.  Our only blemish was Forest Hill’s win by two on the road at #1 seed Port St. Lucie Centennial.  This after the Falcons were down by seventeen points at one point in the game.

Best Matchup: While Round 3 of Orlando Dr. Phillips vs Orlando Olympia should be another epic contest, there are a LOT of potentially great games for Tuesday night.  Oak Ridge has a chance at redemption after losing to Lake Brantley in the district semi-finals. Orlando Evans vs Sanford Seminole will feature teams with high-level athletes led by dynamic scorers in Jyshaun Melvin for Evans and Demari Henderson for Seminole.  In Sarasota, Riverview will have to contend with Windermere’s Sean Stewart and his ability to dominate the paint while the visiting Wolverines will have to find ways to slow down the Rams high-scoring duo of junior Jason Jackson and freshman Jamier Jones.  Forest Hill at Lake Worth in region three is another interesting district rematch.  Wellington drives up Florida’s Turnpike to take on and under-valued Kissimmee Osceola team in a battle of teams ranked right next to each other in the FHSAA power rankings.  Down south, a Miami High team that has been at times spectacular and at time puzzling takes on the young guns of Columbus.  Finally, it could be a very high-scoring affair when #10 Miami Palmetto takes a ride up to Weston to take on Cypress Bay.  Both teams like a fast tempo and have multiple players that can make shots.  It could be the most entertaining game of the night.

Best Chance for an Upset: It isn’t out of the realm of possibility for Evans to go on the road and take down Seminole in Sanford.  The team’s pretty much mirror each other.  Also, the Forest Hill/Lake Worth district rematch could be problematic for the host Trojans.  They have beaten Forest Hill twice this season (once scoring 100 points, once scoring 92 points) but it is always tough to beat a team three times, especially in an elimination game.