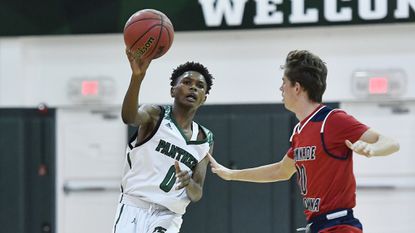 We finished 11-3 in our predictions for Thursday night.  No, that doesn’t add up to sixteen games.  Evidently, Miami Sunset had to forfeit to Miami Edison Thursday night.  We don’t know if it is COVID-related or what.  Also, Gainesville Eastside didn’t have to go down to The Villages.  However, since we were not aware of those two issues, we are not counting those games against our record.  In Jacksonville, Paxon, ranked #6, went to neighboring Bolles, ranked #5, and squeaked out a win.  That is a very mild upset at best.  On the west coast, Eustis squeaked by Nature Coast Tech in Brooksville in a low-scoring affair.  Finally, Discovery out of Lake Alfred near Lakeland took a long ride down to Belle Glade and grabbed win.

Best Matchup: Pensacola is ranked #2 but must go on the road to face #4 Marianna.  A long drive on a school night won’t make things any easier for Pensacola.  After that, we like the Eastside at Santa Fe matchup in Gainesville on Tuesday night.  Two of Eastside’s losses this season have come at the hands of Santa Fe.  Could the old adage “hard to beat a team three times in a season” be true?

Best Chance for an Upset: Looking over the schedule, it is really tough to find any upset candidates.  Maybe a higher ranked Paxon squad wins on the road at West Nassau, but other than that, no surprises are expected.

We were 13-3 overall in our picks. An unraked Mosley defeated #10 Pine Forest at home.  We liked Jones of Orlando’s chances against Fivay but that didn’t materialize.  Finally, #18 Tampa Jesuit crossed the bay and defeated #5 Clearwater in what was certainly one of the bigger surprises of the night regardless of classification.

Best Matchup: It is tough to decide between a pair of games.  Lee, ranked #9, heads to down to #4 Ponte Vedra.  Lee’s strength of schedule is much better and Ponte Vedra is a bit of an unknown.  However, winning on the road isn’t easy and in a battle of top ten teams, home court is a big advantage.  The other game we find enticing is #6 Auburndale at #11 Rockledge.  That game should be tough and physical.

Best Chance for an Upset: Lee has excellent guard play so we can see them winning at Ponte Vedra.  Also, we think Norland can go down to Northwestern and win a slugfest.