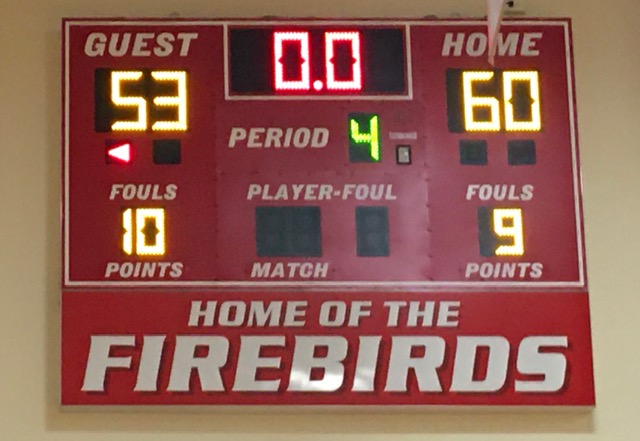 DORAL — Doral Academy stayed in the hunt in Class 6A-District 16 Tuesday with an important 60-53 victory over Mater Academy in front of a full house.

Carter is all that

Senior shooting guard Devin Carter showed once again why he is a major Division-I prospect, lighting up Mater for 32 points. The 6-foot-4 standout scored in a variety of ways in hitting 12 of 19 from the field — including three 3-pointers — and 5 of 8 from the free-throw line. Carter was a major factor on the boards and came up with a big block of junior guard Ryan Sanchez in the final 20 seconds to close out the Lions.

“We just wanted to go out there and defend because we gave them a lot of easy buckets last time,” Carter said. “You know with their main player [Malik Reneau], we tried to shut him down and we did a pretty good job with that, fouling him out late in the fourth quarter.”

‘We needed this one’

Longtime Doral Academy coach Jorge Fernandez started out the post-game interview with, “We needed this one.”

And that the Firebirds did. A loss would have dropped Doral three games behind South Miami (12-1) in the district.

“Playing at home, if we would have lost this one then we really … you know obviously you’re trying to win a district championship in the regular season,” Fernandez said. “This loss would have hurt us because now we’re at three district losses and it would have been hard to catch them and South Miami.

“So now we still have got South Miami to play [Feb. 1] so it will be interesting to see what happens on Thursday because South Miami has to go to Mater. South Miami is undefeated in district but they played us and Mater at home. Now they’ve got to go on the road and play us and Mater.”

Reneau, the impressive 6-7 sophomore, did carve out a double-double for Mater before fouling out on a charging call with 1:56 to play. Reneau made 9 of 14 field-goal attempts in finishing with 18 points and 10 rebounds. Doral junior post Kameron Johnson did a nice job making it difficult for the Lions to get the ball to Reneau. Sanchez was second on the club with 11 points but had a 3-for-11 shooting night.

A freshman to watch is Kameron Johnson’s younger brother, 6-7 Justin Johnson. Justin Johnson gives Doral a second weapon to go along with Carter. He showed the ability to drive the ball to the basket and made 6 of 9 field-goal attempts for 13 points and 6 rebounds. “He’s only a ninth-grader, but he stepped up,” Fernandez said. Doral starts two freshmen — the other ninth-grader is guard Gabriel Hernandez.

Effort to get Josue going

Mater came out of halftime and got 6-3 senior guard Isaiah Josue into the game plan. The D-1 prospect did not take a shot the entire first half. In the third period, Josue started taking the ball to the basket and it caused the Firebirds problems. Unfortunately he had a bad shooting night, going 2 of 9 from the field and 5 of 8 from the free-throw line.