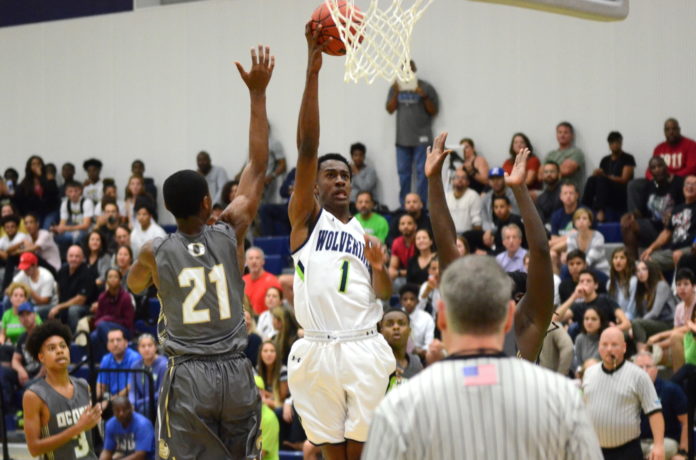 It was a full house at Windermere as the Wolverines hosted Tampa Wharton in the Class 8A Region 2 final on Friday night.  Fans were still coming in the gym well after tip-off.  Those who came would be treated to a fantastic display of high school basketball.

At the outset, it looked like Windermere was going to make quick work of the Wildcats.  Dante Love found his touch early from deep and at the midway point of the first quarter, Windermere had an eight point lead at 15-7.  The momentum shifted quickly from that point as a couple of threes from Gio Reyes sparked the Wildcats on a 10-4 run to end the period down by just two at 19-17.

Wharton scored the first four points of the second quarter to take its first lead at the 6:30 mark.  Windermere rose to the occasion, outscoring Wharton 9-2 to take back the lead with the score 28-23 with four minutes left in the half.  One again, the Wildcats responded with a run to close out the period.  They outscored the Wolverines 10-2 and led by the score off 33-30 at the half.

Now it was Windermere’s turn.  They scored the first four points of the third quarter to take back the lead by a point with 6:30 left in the third.  Just as Windermere did in the second quarter, Wharton did in the third as they put together a 7-0 run to lead 40-34 with 5:19 to play in the period, forcing a Windermere timeout.  The Wolverines hit a three on their next possession and tied the score at forty just after the midway point of the quarter.  There was little scoring the rest of the way in the third quarter but when the clock reached zero, it was Wharton with a slim three point lead at 45-42.

The final period proved to be tightly contested.  We pick up the action at the three minute mark with Wharton up 54-51.  On Windermere next possession, Trey Moss knocked down a three to tie the game.  A bit later, after a turnover by Wharton, Elliott Yorke scored in transition to give Windermere the lead at 56-54 with 1:44 to play.  Darrin Green, a UCF signee, responded with a three (his first of the game after missing his first six attempts), to give the Wildcats a one point lead with 1:20 left to play.  Windermere missed a driving layup on their next possession but forced a Wharton miscue at the other end.  After a timeout and with under a minute to play, Windermere was patient in looking for a good shot.  With just over seven seconds to play, senior Josh Colon got a wide open look from the left wing.  He connected, giving Windermere a 59-57 lead.  Wharton called a quick timeout to set up one last play.  With just over five seconds to play, Wharton drove to the basket.  The shot was contested and whether or not a foul could have or should have been called will forever be debated.  Either way, the ball rolled around the rim and off as the horn expired, sending Windermere, in just its second year of existence, to Lakeland for the Class 8A Final Four.

Windermere was led by Love’s 20 points, followed by Moss’s 14.

For Wharton, Reyes led the way with 14 points while Jasper Floyd finished with 11.