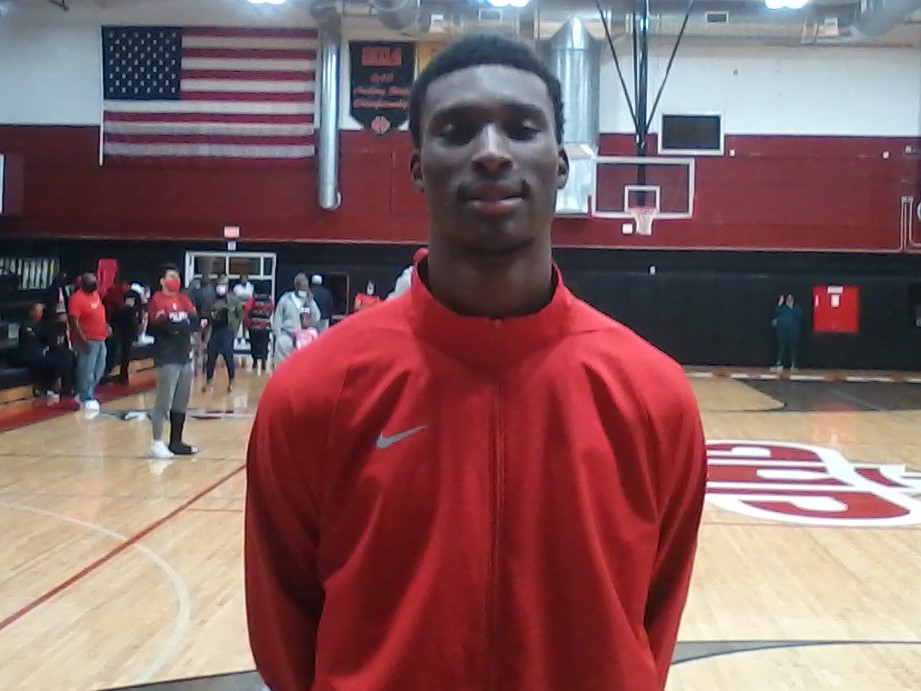 We ventured into downtown Orlando to check out the Region Two final in Class 4A as Santa Fe out of Alachua County (Gainesville) came calling on Lake Highland Prep.  Both teams won at home on Tuesday in a rematch of their respective district final.  On a side note, Santa Fe beat district foe and #3 Gainesville Eastside three times this season, the only three games Eastside lost all year!  This year the home team is on the bottom line of the bracket per the FHSAA which meant the Raiders and their very vocal fan base boarded a pair of buses to descend upon the home of the Highlanders.

Lake Highland opened up the scoring with a putback from Kellen Lewis and a three from Machai Campbell to take a quick 5-0 lead.  Santa Fe finally got on the board after NC State signee Ernest Ross connected on one of two free throws and then drew within two after an offensive rebound basket.  From there, the Highlanders scored eight unanswered points as Jared Berry scored on a drive then connected on a three while Howard signee Miles Stewart dropped in a three of his own.  Santa Fe took a timeout down 13-3 with 3:30 left in the opening period.  Out of the timeout, the Raiders’ Jonathan Lee scored inside but Stewart converted a three-point play for Lake Highland to up the margin to eleven.  A mid-range jumper from Dontrell Jenkins of Santa Fe beat the end-of-period buzzer and after one quarter Lake Highland seemed to be cruising, up 16-7.

That Jenkins “J” gave the Raiders momentum as play resumed for the second quarter.  Lee scored twice inside to get Santa Fe back to within five.  Jah Quinones of LHP got the Highlanders their first basket on a baseline floater next time down the court.  A three from Mason Brown for the Raiders and then two free throws from teammate Cayvian Wakely brought them to within two at 18-16.  Stewart of LHP hit a three to extend their margin and Bryce Sensabaugh, who had just been cleared by doctors to play earlier in the week, connected on a three to push the LHP lead to eight at 24-16.  After a free throw from each team, Brown of Santa Fe hit a three and Wakely scored on a drive to bring the Raiders to within three.  Stewart of LHP responded with a three, his fourth of the half to make it a 28-22 game.  Santa Fe wasn’t done.  Ross scored on a drive and another buzzer beater by Jenkins, this one from behind the arc, made it a one-point game, 28-27, at the half.

A steal and score by LHP’s Berry opened the third quarter scoring.  That was answered with a three from Wakely, which gave the game its first tie at 30-30.  The Highlanders now slowed the pace down, looking to get good shots regardless of how much time it took.  Campbell hit a three for LHP but the Raiders answered with a drive from Wakely and after Ross threw down a lob over the top of the LHP zone, Santa Fe had its first lead of the game at 36-35 midway thru the quarter.  Berry grabbed the lead back for Lake Highland with a three but Jenkins again closed out a quarter for the Raiders, hitting a mid-range jumper to tie the score at 38-38 with one more quarter remaining.

A putback by Ross of the Raiders began the scoring for the final quarter.  Berry of Lake Highland connected on a three to give the Highlanders a one-point lead.  Ross then scored another offensive rebound basket and again inside to give Santa Fee a 44-41 lead.  Berry answered with a driving basket for LHP and after Wakely made one of two free throws, Berry tied the game at 45-45 with another driving score.  After a Santa Fe timeout, Ross scored on a lob off of a set play.  Stewart of LHP had a chance to tie the game but made only one of two free throws.  Ross, continuing his stellar fourth quarter play, giving the Raiders a three point lead after scoring on a drive.  The game was now in its final minute.  Berry once again came up big for LHP, draining a three pointer to tie the game at 49-49 with thirty-five seconds to play.  Santa Fe held the ball and called timeout with fifteen seconds remaining.  Out of the timeout, the Raiders ran another lob play for Ross.  His defender did all he could to challenge him, but the eight-inch height difference could not be overcome.  Ross scored with nine seconds left and LHP called a time-out.  Lake Highland turned the ball over on the inbounds pass and let almost five seconds elapse before fouling Wakely.  He missed the front end of the one and one.  LHP rebounded and called another time-out.  At this point LHP actually had THREE problems.  The first obviously was the score.  The second was the amount of time left.  The third was that Santa Fe had three fouls to give before reaching the bonus.  The Raiders used those fouls wisely.  After being fouled three times in the backcourt, Lake Highland had just under three seconds to get a shot off after inbounding the ball from half-court.  Berry got the ball and quickly got it in the hands of Stewart.  Santa Fe challenged the shot and from just inside the half-court circle, it had little chance of going in.  The shot was long left, and Santa Fe celebrated winning a regional title by the score of 51-49.

Ross led the way for Santa Fe with 20 points, 12 in the final quarter.  He also grabbed 12 rebounds.  Wakely had 10 points while Jenkins tallied 7 points, all coming on baskets to end all but the final quarter.

Berry led LHP with 21 points, 10 points in the last period.  Stewart closed out his high school career with 16 points, all but one coming in the first half.

Santa Fe will take on West Nassau in the opening game of the Class 4A semi-finals.