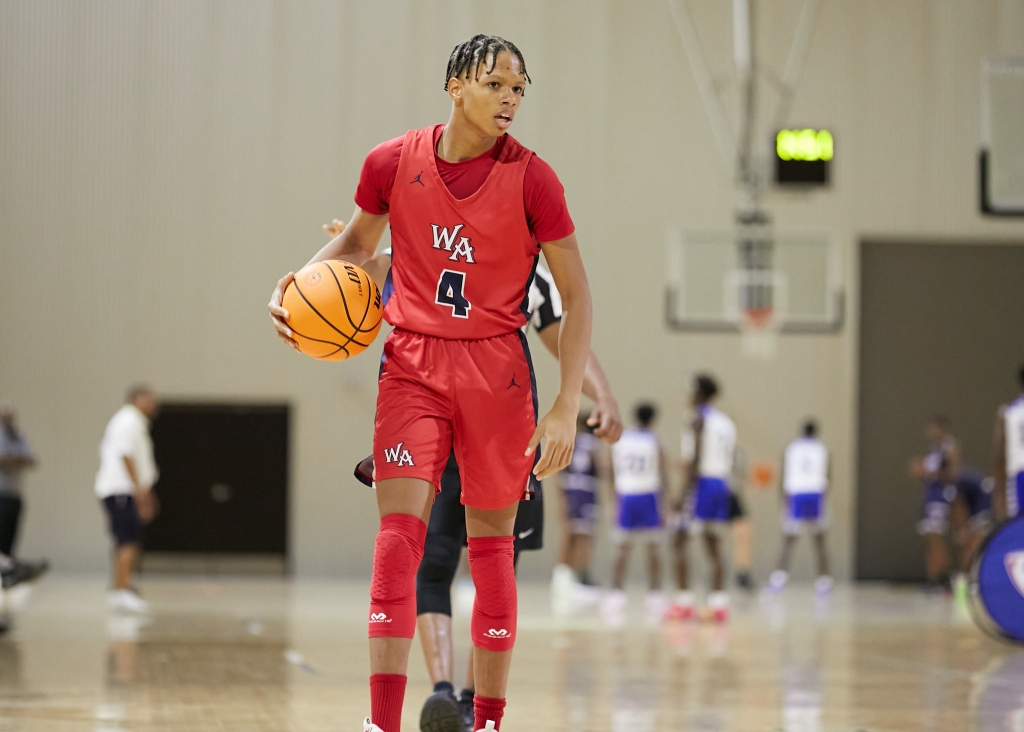 Despite a boatload of youth on this Westminster squad, it is extremely talented.  And while that youth will certainly get the club notoriety, it will be Jaylen Carey, a 6’9 senior, that will be the key piece to a championship run for the Lions.  If Carey can keep his attention focused on dominating inside, he is just too strong and powerful to be stopped.  If he floats too often on the perimeter, then things can get kind of dicey.  A pair of sophomores, 6’4 Alexander Lloyd and 6’6 Dwayne Wimbley, have national recruiting profiles.  Lloyd will play either guard spot, has a reliable perimeter shot and knows how to finish at the rim.  Wimbley is a dynamic slasher, both in transition and the half-court, an active offensive rebounder, and a guy comfortable taking and making tough shots in pressure situation.  The freshman duo of 6’0 Randy Livingston and 6’8 Alexander Constanza will not be intimidated playing at this level.  Livingston got some quality run at Calvary Christian as an eighth grader while many believe Constanza will make wavers on a national level sooner rather than later.  Enrico Borio, a 6’7 junior, will provide support in the paint.  It will be a tough route to Lakeland and even tougher should Westminster get there, but at the start of the season, on paper, Westminster looks to have the goods.

Florida High, Florida State’s lab school, is the reining 3A champ.  They proved this summer and fall that they won’t go quietly into that good night.  Anthony Robinson, a 6’2 senior, is committed to Missouri.  He will get a chance to show more scoring ability this time around.  Thaddeus Burns, a 6’2 senior, 6’3 junior Marquez Allen, and a pair of 6’5 forwards, junior Dakota Morris and sophomore Trey Card, will provide plenty of support at both ends of the floor.  It’s a tough region, starting with district rival Maclay and continuing with Starke Bradford, Gainesville P.K. Yonge, and Jacksonville Providence.  In a revamped Region 2, we are going to take a flyer on John Carroll out of Fort Pierce.  Their top four scorers return, led by 6’2 Wilke Denaud, a big time dual-sport athlete, and 6’1 point guard Adrian Singleton. Aaron McFarlane, a 5’10 sophomore, and 6’0 junior Tony Colebrook are youngsters with promise.  No doubt regional foes such as Melbourne Holy Trinity, Orlando The First Academy, and Lakeland Santa Fe Catholic, along with the like of district rivals Palm Beach Gardens Benjamin and Riviera Beach Inlet Grove will have a say in this region’s Lakeland rep.  Tampa Catholic isn’t a given in Region 3, but they are close.  Karter Knox and crew are just too talented to not get the nod at this early stage of the season.  Watch out for Tampa Brooks DeBartolo, Clearwater Calvary Christian, and First Baptist Academy of Naples to put up challenges.

The 6’5 junior had a tremendous spring and summer.  He was a top ten scorer in Nike’s EYBL 16U division playing for the Florida Rebels.  When he had the opportunity to play on the 17U level at the Peach Jam, he averaged 17 points a contest.  He also was a bit of a surprise selection to play with USA Basketball in the FIBA U17 Worlds.  That group brought home a gold medal and Knox showed many (including NBA scouts) he is ready to challenge his big brother Kevin for top baller in the Knox family.

We’ve mentioned all but Edison earlier.  A 6’3 senior, Edison was a first-team all-state selection last year as he led SJP II to the regional finals.  He is an athletic guard that excels at getting to the basket, scoring in traffic, and playing zealous on-ball defense.

This is a young group but we were very impressed with their effort and never-say-die style of play at our Fall Team Camp.  Sophomores Lorenzo Major and Michael Watson, along with freshman Jaden Joseph, may take some lumps now but should be a tough out come district tournament time.

The 6’0 senior is tough, tenacious, and backs down from no one.  He is a magician with the ball, makes great shot vs. pass decisions, and finds easy scoring opportunities for his teammates.  Wendrow doesn’t look to shoot or score much, but when he does, he is effective.  He is a very fun player to watch and provides cohesion to a talented Miami Country Day squad.