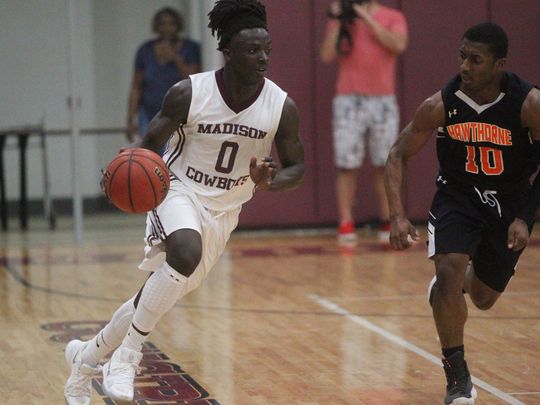 We didn’t do too bad with our first round predications in this class. We finished 6 up and 2 down, with our two misses being the District 3 & 4 contests.  Kudos to Port St. Joe for not only going on the road and winning but doing so in convincing fashion.  Sadly, the closest contests were ten point wins by both Graceville and Bell.  All of the rest were blowouts.

Best Matchup: No doubt, the Madison at Hawthorne contest will be hotly contested.  Last year, Madison won big at home and Hawthorne would like nothing more than to return the favor.  The winner heads to Lakeland as the favorite to win the state title in 1A.

Best Chance for an Upset: Paxton has lost only one game all season but now have to go on the road to Graceville.  While Graceville had a losing record at 11-14 at the end of the regular season, they have caught fire as of late.  Paxton should definitely be on upset alert come Tuesday night.

Our finish of 6 up, 1 down, and 1 “suckered by fake news” was a bit frustrating.  The FHSAA website had the District 8 results reversed, showing Miami Christian as the winner and Schoolhouse Prep as the runner-up.  We would have gone with Miami Christian over Grandview at the time, so we are tempted not to count that blemish.

The closest contest was Calvary Christian’s nine point win on the road at Bayshore Christian, which makes us feel good about anointing that game as our Best Opening Matchup.  The average score of the seven remaining games was 74-39; not a lot of parity in Class 2A.

Best Matchup: Three of the four games on Tuesday night are district final re-matches.  Of those, the Miami Christian/Schoolhouse Prep games seems to hold the most promise.  Schoolhouse lost the first game at home by a single point but won by two on a neutral court in the districts.  The Victors have been the heavy favorite for the 2A title all season long and have played an extremely tough schedule to prepare for the playoff run.  It will be difficult for MC down go to Schoolhouse and come out with a win but they certainly have the talent and pedigree to do so.

Best Chance for an Upset: Crossroad Academy out of Tallahassee has played some good teams very close.  In fact, only one of their losses to bigger schools was by double-digits.  Impact has a far superior record but has struggled against schools from larger classifications.  Impact has been looking forward to getting back to Lakeland after getting that far last season.  If they aren’t careful, Crossroad could spoil that plan.

We did well with seven winners and one dud, that one being Mount Dora Christian falling on the road to St. Pete Canterbury.  Our nod for best game, Village Academy vs. Champagnat, was a nine point victory for Champagnat.  The most competitive game appears to have been Jax Christ’s Church 83-82 victory over Pensacola Christian.  We highlighted that game with our Best Chance of an Upset profile.

Best Matchup: The rematch between Fort Myers Canterbury and First Baptist out of Naples should be a good one.  This will be the fourth meeting between the two teams.  The first two were close, single-digit wins for First Baptist, while the district tournament final was a blowout in their favor.  The old adage is that it is very difficult to beat a team three times in a season, let alone four.  This one counts the most.

Best Chance for an Upset: Jupiter Christian, ranked #5, travels south to take on #2 Champagnat.  Jupiter Christian has played some of its larger school competition tough and has won some notable games against those.  Champagnat has the best strength of schedule rating of teams left in the tournament.  It will certainly be a challenge for Jupiter Christian to head down south and win but they have a puncher’s chance of doing so.