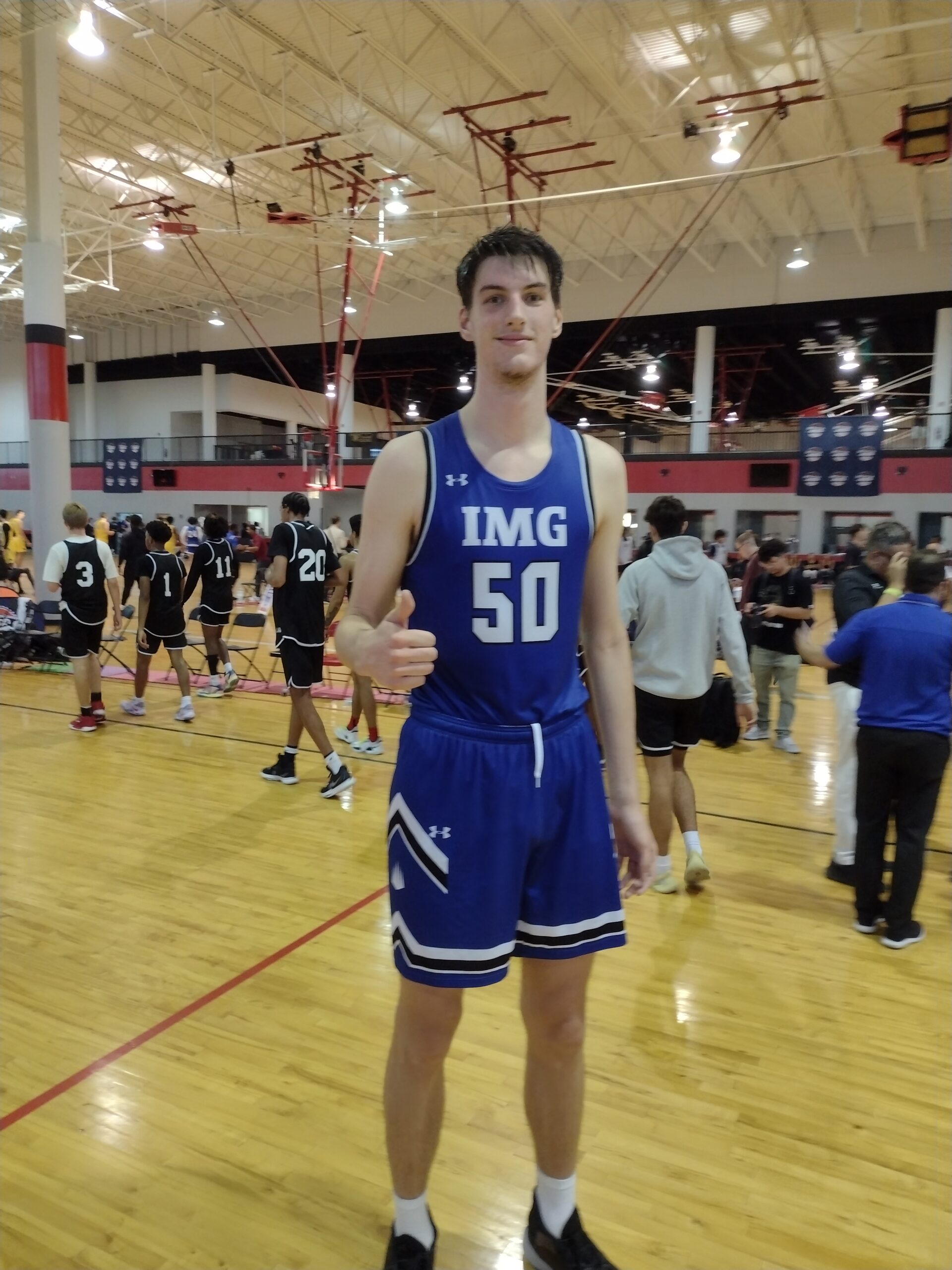 IMG Blue is a bit more “traditional” program under the IMG umbrella.  Westminster is a power down in South Florida and while young, has a lot of talent.

The presence of IMG’s 7’6 junior Olivier Rioux clearly changed the Westminster Academy attack.  Despite forcing turnovers on IMG’s first two possessions, Westminster settled for three-point shots.  IMG got on the board first with a three from 6’3 junior Gerard O’Keefe, quickly followed by a slam inside from 6’6 junior Jacob Hammond to grab a 5-0 lead.  Westminster drew to within one as 6’7 sophomore D.J. Wimbley hit two free throws and 6’8 freshman Alex Constanza scored on the break to make the score 5-4 with just under five minutes to go.  An 8-0 run by IMG, five from 6’9 freshman Tim Winkler, grew the Ascenders lead to 13-4.  Westminster stopped the bleeding with a putback from 6’3 sophomore Alex Lloyd, but only for a moment.  IMG closed out the quarter with another 8-0 run, six on back-to-back threes from Hammond, make the score 21-6 in favor of IMG after one quarter of play.

IMG hit a three to open the second period.  Rioux was now on the bench and Westminster was hoping to take advantage.  The Lions scored four quick points but it didn’t take IMG long to respond.  Another 8-0 run pushed their lead to 32-10 with four minutes left in the half.  Westminster then reeled off seven straight points, four from Lloyd, to get within fifteen.  IMG answered with a three.  From there the teams would trade baskets until the end of the quarter, which found IMG up 41-23.

Westminster scored the first four points to draw within fourteen, but every time it seemed like Westminster was going to get back in the game, IMG had an answer.  The closest Westminster would get in the period was thirteen points on two separate occasions but with one quarter left, IMG seemed in complete control up 59-44.

Westminster amped up its defense to start the final period.  Even though 6’9 senior Jaylen Carey fouled out with 7:15 left to play, Westminster was unfazed.  A 9-0, capped off by a three from 6’0 freshman Randy Livingston, now made it a new game with just under six minutes to play and the score 59-53.  IMG responded and pushed its advantage back to ten, 66-56, in the span of just over a minute.  With under a minute to play, IMG led 77-70 and looked to have the game in hand.  That would not be the case.  Lloyd hit a three for Westminster and after an IMG turnover, Livingston hit two free throws to make the score 77-73 with thirty-seven seconds remaining.  IMG was able to hold Westminster off to win the game by the final score of 81-78.

IMG got 18 points from O’Keefe while 6’ junior Eric Baldassairre added 17.  Winkler scored 14 and 5’10 junior Tyler Burton had 10 for the Ascenders.

For Westminster, Constanza led the way with 17 points while Lloyd had 16, Livingston had 13, both Wimbley and 6’5 junior Jeremiah Police had 11 while Carey finished with 10 points.