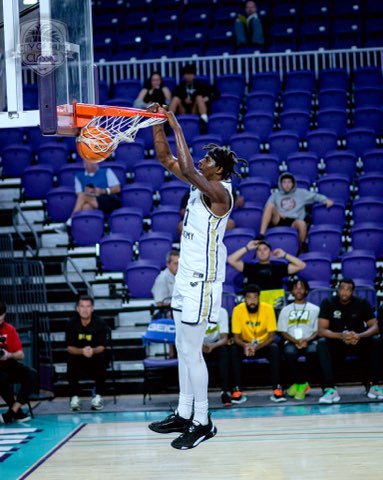 The Signature series brings four independent teams that play at a highly competitive level but are not in the main tournament bracket that particular year.  Link Academy, a member of the National Interscholastic Basketball Conference (NIBC), has quickly elevated itself to among the elites in high school basketball.  St. Frances, from the tradition-rich Baltimore Catholic League, has a long history of producing not just high-major D-I players on the collegiate level but NBA talent as well.

Link struck quickly with a bucket inside from 6’9 senior Cade Phillips.  St. Frances responded with a putback from 6’6 senior Carlton Carrington and a transition basket from 6’4 senior Jahnathan Lamothe to grab the lead.  It was short-lived as Link’s 6’5 senior Cameron Carr drilled a three and 6’1 junior Elliott Cadeau scored on the break to make the score 7-4 with under five minutes to play.  A 5-1 run by St. Frances, highlighted by a transition dunk from Carrington, gave them a 9-8 lead.  Link scored four straight points to take back the lead.  St. Frances connected on a pair of free throws to get back to within 12-9 but Link finished the first quarter scoring with two buckets at the rim to lead 16-11 after one quarter of play.

The Link run continued at the start of the second.  Carr drilled a three and then a transition basket from Cadeau gave Link at 21-11 lead at the 6:15 mark.  St. Frances got on the scoreboard with a floater from 6’2 sophomore Tyler Jackson, followed by another transition slam from Carrington.  Cadeau answered the run with a three to make the score 24-15 with just over five minutes left in the half.  Link pushed its lead to 28-15 but St. Frances then made a run.  They trimmed the margin down to eight, 30-22, with two minutes left after a three-point play from Carrington.  Link quickly got their advantage up to 34-22 but St. Frances responded with the last two baskets of the half to make the score 34-26 at the break.

It looked like Link might put the game away early in the third quarter as they lead 43-30 with 5:22 to go in the period.  St. Frances got itself together, scoring seven straight points, the last on a three from Carrington to draw to within 43-37.  Link quickly pushed that margin to twelve, 49-37, but back-to-back threes from St. Frances again got the margin back to just six points.  A two-point basket by St. Frances was offset by a three from Link’s 6’8 senior Jacolb Cole to make the score 52-43 going into the final period.

Things got very interesting the fourth quarter.  It looked like Link had things well in hand up 60-48 with five minutes left.  St. Frances got going, outscoring Link 14-2, highlighted by back-to-back threes from Carrington, to tie the game at 62-62 with under a minute to play.  Cadeau responded with a driving layup to give Link the lead with thirty-five seconds left.  St. Frances missed on a drive and was forced to foul.  Link would ultimately hold on at the foul line, getting four straight free throws from 6’5 senior Ja’Kobe Walter and ultimately win by the score of 68-64.

Link was led by Carr with 15 points.  Walter finished with 13 points and Cadeau tallied 12 points.