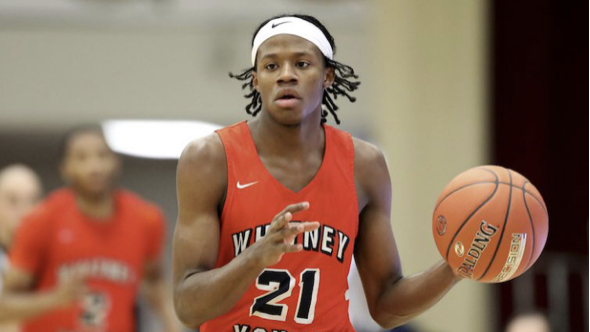 It would a clash of the North vs. the South with Whitney Young out of Chicago taking on Scotlandville from Louisiana.  Both teams are reliant on perimeter players to score, so it should by an up-tempo affair.

Instead, there was a lot of activity but little achievement on the part of both teams.  A putback from Scotlandville’s Jonathan Horton put them on the board first.  A pair of baskets by D.J. Steward of Whitney Young gave the Dolphins a lead a moment or two later.  Scotlandville hit a free throw but after a driving score from Tyler Beard of Young, the Dolphins led 6-3 at the four minute mark.  Carvel Teasett of Scotlandville scored the game’s next five points to give his team an 8-6 advantage.  Whitney Young tied it a few possessions later but a Scotlandville floater in the lane made the score 10-8 in favor of Scotlandville after the first quarter of play.

The two teams exchanged baskets at the start of the second quarter.  After a baseline drive and score from Beard, Young tied the game at twelve with just over four minutes to play.  Horton scored for Scotlandville to break the tie, but Whitney Young scored five consecutive points to re-take the lead at 17-14 with just over two minutes to play in the half.  Tai’ron Joseph stepped up for Scotlandville, scoring the last two points of the quarter to give them the lead at the break, 18-17.

The third period turned out to be what we expected the first half to be.  Scotlandville hit a free throw early on but Steward tied the score at 19-19 a moment later.  Scotlandville scored the next four points but Whitney Young continued to stay within reach.  For the remainder of the quarter, Whitney would stay close but could never crawl back into a tie, let alone grab a lead.  Whitney Young got to within two, 34-32, after a transition basket from Sangolay Njie, but a late bucket from Scotlandville made it a four point 32-36 game with one quarter left to play.

Things got more interesting in the fourth quarter.  We picked up the action with 3:12 left to play and Scotlandville up eight at 47-39.  Thomas scored on a drive for Young then Scotlandville hit a free throw.  Two more baskets by Young, this time by Steward, got them to within three at 47-50 as Scotlandville went one of two from the line with just under a minute to play.  Scotlandville hit a free throw, then Njie of Whitney Young put back a miss to make the score 51-49 with twenty-five seconds left.  Scotlandville again made just one of two free throws to get the lead back to three with eighteen seconds left.  Whitney Young’s Steward attempted to tie the game on a deep three but was off.  Njie put back the miss to get within one, but only one second was left.  A quick foul sent Scotlandville to the line, where they made just one of two.  Young didn’t have enough time for a shot and Scotlandville advances with a 53-51 win.

Scotlandville got 13 points each from David Thomas and Horton.  Teasett added 12 points while Joseph finished with 11 points.

Both Steward and Njie scored 16 points each for Young.