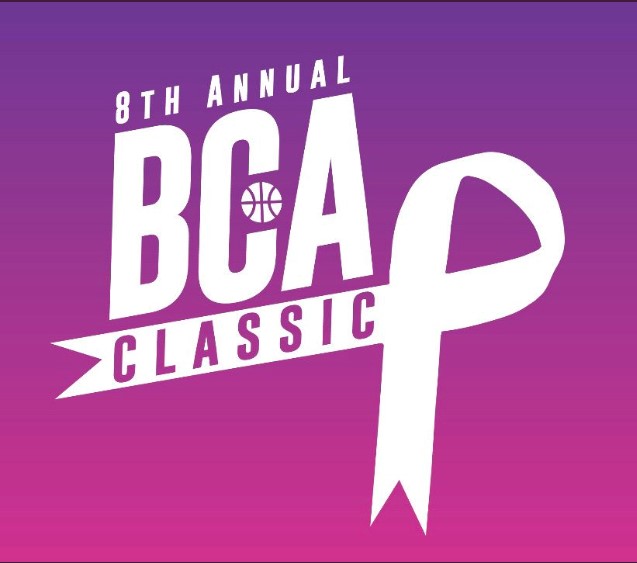 We took in the 2019 Breast Cancer Awareness Classic at Orlando Oakridge this past Saturday.  It was a great day of basketball for a great cause.

The Warriors of Calvary Christian got the state’s attention when they took SIAA power West Oaks Academy to the brink at the Fall Festival.  They jumped out to an early lead on Jones of Orlando thanks to some hot three-point shooting and led 11-7 midway thru the first period.  Jones began to score by getting to the rim and tied the game at thirteen with a minute left in the first.  Calvary scored a late bucket to end the quarter up two.  That last bucket carried over into the second quarter for an 8-0 run that put the Warriors up 21-15 with five minutes left in the period.  Conversely, the Tigers hit a dry spell and by the end of the half, the Warriors were up ten at 31-21.

The Tigers came out roaring in the third, cutting the deficit to three, 34-31, by the five minute mark.  The Tigers upped the defensive pressure and with just a minute to go in the third, took their first lead of the game at 38-37.  That would be the score heading into the final period.  In the fourth, the teams battled back and forth with neither one gaining much of an advantage.  At the four minute mark, the score was tied at forty-four.  From there, Calvary would go on an 8-2 spurt to give them some breathing room at 52-46 with one minute left in the game.  Jones had to foul to get the ball back but the Warriors made the most of their free throws.  The Tigers hit a three at the buzzer to make the final margin three points, 56-53.

Calvary was led by 6’1 freshman Tristan Gross with 25 points.  UNF signee, 6’7 senior Josh Berenbaum added 11 points to the cause.

There was some concern when Blake came into the game with only six players.  As the game unfolded, it was clear they would be able to hold their own.  The game was tied at 7-7 midway thru the first quarter.  The Eagles of CFCA had a two point, 15-13, lead going into the second period.  Back-to-back-to-back made threes elevated their lead to eleven, 24-11, after just 1:30 of play. After a Blake timeout, the Yellow Jackets came out strong, putting together a run of their own, 9-2, to make the score 26-20 in favor of CFCA midway thru the second.  Blake was not able to climb out from the deficit and at the half the Eagles led 29-24.

CFCA kept their lead for much of the third quarter.  With a minute to play, Blake pulled to within one at 42-41.  The Eagles responded with a three to give them some cushion, but only led by the score of 46-43 heading into the final quarter.  CFCA grew the lead to seven early in the fourth but Blake continued to battle.  The Yellow Jackets got to within one at 54-53 with just under three minutes to play and looked like they might take control.  With just under a minute to play, CFCA scored on a drive to make the score 60-56 in their favor.  Blake got back to within two a few seconds later.  For whatever reason, Blake didn’t foul to get the ball back.  The strategy worked as CFCA turned the ball over with fifteen seconds left.  Blake had a chance to tie or win the game, but the Yellow Jackets couldn’t convert and CFCA would hold on for a two-point 60-58 victory.

Seems kind of odd that these teams would travel to Orlando to play when they are only about twenty miles apart.  Lakewood had played at Montverde the night before and was more than likely still smarting from the stinging loss they suffered at the hands of the top high school team in the country.  That might have been part of the reason the game was so sluggish in the first quarter.  The score was only 4-4 midway thru the first and just 10-9 in favor of Victory Rock when the first eight minutes ended.  In the second period, Lakewood got some momentum going, took a lead, and held it for the quarter with the score being 21-18 at the break.

Lakewood was fast out of the gate in the third as they put together a 10-4 run to grow their margin to nine, 31-22, midway thru the period.  Victory Rock was able to shake it off and not let the Spartans pull away.  With one quarter left to play, the Blue Devils were within five at 34-29. The final period started off with a Victory Rock run of 10-3, giving them a 39-37 lead with five minutes to play.  The Blue Devils maintained the lead, but things got interesting down the stretch.  Down 47-43 with forty-five seconds left, Lakewood knocked down a three to cut it to a one point game.  Victory Rock missed the front end of a 1-and-1 with twenty-four seconds left, giving Lakewood some life.  Lakewood got off a good shot but missed.  However, Lakewood tipped the ball back in to grab a 48-47 lead with under ten seconds to play.  The Blue Devils to did not call a timeout put pushed the ball up the floor.  They caught the Spartans flat-footed and drilled a mid-range jumper with two seconds to go.  Lakewood didn’t have enough time for a shot and Victory Rock Prep grabbed the victory by a single digit, 49-48.

Victory Rock was paced by 6’7 senior Mahamadou Mbow with 16 points.  Lakewood was led by Oteman Delancy with 15 points while both 6’5 senior Santana Bolton and 6’9 senior Jamille Reynolds each had 11 points.

The Crusaders of Tampa Catholic came in with a significant size advantage and put it to work early as they raced out to a 12-4 lead.  The Wolverines of Windermere weren’t fazed as they used the power of the three ball to get to within one, 17-15, with one minute to play.  Tampa Catholic responded and ended the first quarter up four at 22-18.  Windermere got out quickly in the second and grabbed a 25-24 lead with just over six minutes remaining in the half.  Tampa Catholic stayed with it and eventually tied the game at 31-31 with 2:42 on the clock.  From that point, the Crusaders re-asserted themselves, finishing the second quarter on a 9-2 run to lead 40-33 at the break.

At the start of the third, Windermere opened up hot from behind the arc and tied the game at 42-42 with 5:36 to play, forcing at Tampa Catholic timeout.  The Crusaders responded with a 9-0 run after that play stoppage and led by nine heading into the final period up 57-46. This time however, there would be no big comeback for Windermere.  The Crusaders continued to press their advantage and led by thirteen midway thru the fourth.  Ultimately, Tampa Catholic would win by the score of 80-64, but it certainly wasn’t as easy as the final score may indicate.

The Crusaders were led by Johni Broome with 23 points.  Kobe Knox contributed 17 points and both Marcellus Crutchfield and Isaiah Elmore each tallied 14 points.

No, this wasn’t the IMG team that is ranked in the top five in the country; that group played in Washington, DC over the weekend.  Still, this group was competitive with a solid South Miami team.  IMG got the lead early with some hot perimeter shooting and led 9-3 midway thru the first.  South Miami got back on track but was still on the wrong end of the 18-14 score after one period of play.  The Cobras of South Miami finally caught up, tying the game at 20-20 with 3:30 left in the first half.  South Miami would take its first lead a few seconds later and led by three at the break, 29-26.

The lead changed hands a couple of times in the third period but heading into the fourth quarter, South Miami led by two, 44-42.  The Cobras slowly stretched that lead out and with 4:27 left led by ten at 52-42.  IMG got to within six at 56-50 with 1:38 left but simply didn’t have enough fire power to get back into the contest in such a short amount of time.  South Miami would ultimately go on to win by seven, 60-53.

IMG got ten points each from Edrin Tor and Nick Mylonas.

This would be an interesting matchup as the schools, coaches, and players have close ties to each other off the court and during the off-season.  Still it was a bit of a surprise when Schoolhouse came out blazing in the first quarter, leading 11-5 after four minutes of play.  This infuriated the West Oaks coaching staff so much that the starters were pulled for the remainder of the quarter.  On the scoreboard that didn’t help matters and Schoolhouse led 23-7 after one quarter.  West Oaks responded in the second period, cutting the score to 28-20 midway thru.  However, Schoolhouse answered with a 7-0 run, grabbing back its double-digit lead.  The Wolfpack found themselves up fourteen at the break, 37-23.

Things changed very quickly in the third period.  Whatever that West Oaks coaches said or did at the break got the players’ attention. That thirteen point Schoolhouse Prep advantage was cut to five, 46-41 after four minutes of play.  By the time the horn sounded, the Wolfpack’s lead was down to one, and very tenuous.  By scoring the first basket of the fourth quarter, the Flame of West Oaks had their first lead of the contest.  Things got very interesting as the game came toward the end.  With twenty-three seconds left, West Oaks hit a pair of free throws to go up 64-60.  Schoolhouse Prep answered with a three to draw within one, 64-63 with fifteen second left.  Now forced to foul, the Wolfpack sent West Oaks to the line, knocking down both with nine seconds left.  Schoolhouse had another chance after being fouled with 3.6 seconds left, but missed the front end of the 1-and-1.  West Oaks was able to rebound and get rid of the ball before anything else could take place and win a thrilling game by the score of 66-63.

Both teams are expected to be among the better teams in Central Florida and it wouldn’t surprise if both made it to Lakeland and had a rematch.  Ocoee got on top first and stayed there for the first quarter, leading 15-11 after one.  However, Ocoee’s star senior David Green got two fouls early and sat out much of the period.  The Knights of Ocoee kept the lead until the 3:30 mark of the second quarter.  That’s when the Pioneers took their first lead of the contest, 18-17.  Oak Ridge didn’t let up from that point and led at the break by five, 24-19.

Ocoee got close a few times in the third quarter but the Pioneers never gave up the lead.  Ocoee had the ball down just two, 33-31, with sixteen seconds left in the quarter.  However, they turned the ball over and Oak Ridge scored just before the horn.  Still, at 35-31 heading into the final period, it was anybody’s ball game.  That is until Oak Ridge opened up the fourth with an 11-2 run that saw them up 46-33 with 4:12 to go.  However, nobody told the Knights the game was over.  In about a minute and a half, they cut the margin down to seven at 48-41.  Ocoee hit a three on its next possession and now with 1:43 and the score 48-44, it looked like the Knights just might pull it out.  However, that was the final bucket for them as the Pioneers would hold on at the free throw line to win 50-44.