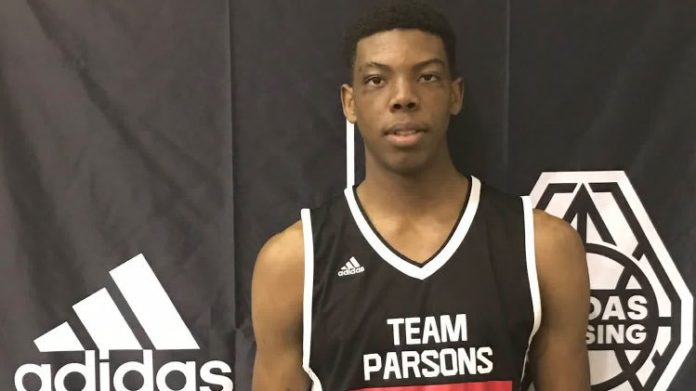 In this report, we’ll identify other high profile teams that we saw at the AAU Super Showcase 17U Gold Division.

In the round of eight, Boo Williams out of Virginia took Expressions Elite to overtime before falling by a single point.  The program out of Virginia is traditionally one of the top teams in the EYBL and regarded as “AAU Royalty”.  This year’s team didn’t have the overall talent as it had in years past, but Cam Thomas, a 6’2 guard in the Class of 2020, is a future star.  His 31 points carried the team against Expressions.  Thomas might have been the best pure scorer in the event as he connected on deep jump shots off the catch and the dribble, knocked down mid-range pull ups inside the arc and floaters in the lane, and finished creatively at the basket thru traffic when getting all the way to the rim.  While a solid ball-handler and passer with the ability to run the team as a point guard, Thomas’ ability to score makes him an ideal lead guard with a bright future at the collegiate level and likely beyond.

For those of you not in the loop, BABC stands for Boston Amateur Basketball Club.  Another tradition-rich program in both the AAU and EYBL, their game against Phenom University in the round of eight was probably the most intense and thrilling of the Gold Division.  Phenom won in overtime by three points, but some confusion between the two coaching staffs, the referees, and the scorer’s table led to some tense moments late in the contest and made an impact in sending the game into OT.  BABC proved to be the eventual champs’ toughest opponent of the event.  Darian Jordan-Thomas, a 6’7 forward for BABC, led his team all game long.  Though a tad undersized, he has broad shoulders and long arms which allow him to play well against bigger opponents.  Jordan-Thomas is also an excellent post scorer with great footwork as he routinely got open looks around the basket after faking an opponent out of the way.  He rebounded and defended with passion and was also fast up the floor in transition.  Jordan-Thomas was certainly fun to watch.

Our hopes of a Team Knight vs. CP 25 matchup in the semis came crashing down when CP 25 fell to eventual runner-up All-Ohio Red.  That would have guaranteed one Florida team in the finals.  As expected, Omar Payne was a big impact player and the team played in front of a lot of high-major college coaches due to his presence.  He surprised and impressed with his ability to turn, face, and knock down shots along the base line when forced away from the post.  As we’ve come to expect he was a productive rebounder, a staunch rim protector, and had more than his fair share of highlight finishes in transition or on lobs.

Darrin Green committed to the University of Central Florida before the Showcase began and he seemed to play a bit more loose and confident with his college decision out of the way.  In addition to making a handful of threes, Green attacked the basket a bit more than usual and was also seemingly more addictive in pursuing missed shots at both ends of the court.

A steadying force for CP 25 at the point guard spot was 6’1 Xavier Johnson.  We appreciate how he plays the game with a calm demeanor, gets his teammates involved, and takes and makes smart shots.  He makes shots out to the college three point line but can also scoot by defenders, weave his way thru traffic and score at the basket or kick the ball to open teammates.  Johnson is also a solid on-ball defender, making him a player that has an impact at both ends of the court.

Isaiah Palermo, a 6’5 wing, is kind of the team’s “plug and play” guy.  He can seemingly play anywhere the team needs him and produce.  While not considered an outside shooting threat like teammate Green, Palermo shoots the ball well when open outside the arc and is very accurate on one-dribble pull-ups inside the three point line.  He’s an acceptable ball-handler and passer, competes well against bigger opponents for rebounds and is generally assigned the guard the opponent’s best player, regardless of size.

K’mani Doughty, a 6’6 forward, was another versatile performer this past weekend for CP 25.  Back in the day, he would be called a “swing man”, a guy that has the ability to score from the outside but also defend and rebound against bigger wings and forwards.  Now, Doughty is one of those players that coaches find valuable as he has the ability to play and defend multiple positions.

Making an impact off the bench was 5’9 point guard Josh Marte.  A vocal leader, the team’s overall play does not drop off when he enters the game.  He pushes the pace, makes open outside shots, and aggressively defends the basketball.

Seth Coleman, a 6’5 forward, is an energizer for the team when he enters the game.  While still growing on the offensive end, Coleman does a lot of the dirty work of grabbing rebounds, defending wings and interior players, as well igniting the team with dunks after steals or on lobs in transition.

A member of the Class of 2020, 6’5 Okario Oquendo got college coaches to take notice in the round of eight game with a pair of threes as well as two of the more ferocious dunks in transition we saw in our time at the Showcase.  He played well in a high profile and high pressure environment and no doubt college coaches from multiple levels took notice.

This team was essentially a 16U team playing up.  The Fusion was eliminated by Team Knight in the round of eight.  However, they knocked off a 3-0 Florida Sons team in the first round of bracket play, eliminating a double-digit deficit in the process.  Leading the way in that comeback was a pair of wings, 6’5 Jamel King and 6’3 Colby Jones.

King is a three point sniper.  He went 8-17 from beyond the arc against the Sons, none bigger than the last one that gave the team a two point lead with twenty-one seconds left in the game.  He’s thin and hopefully will fill out a bit over the next couple of years.  Should he show more versatility at the offensive end, King’s recruiting profile will go higher.

Jones got off to a slow start against the Sons but once he got going he was tough to contain.  While he made his lone three point attempt of the game, his points came inside the arc on mid-range jump shots and drives to the basket.  He spent much of his time handling the ball and running the offense and was solid in that role.

The Sons drew a lot of college coaches to their games.  One of the main draws was 7’0 center Ibrahima Diallo.  We’ve seen him play numerous times and in this game against the Fusion, he played as well as we’ve ever seen him play.  He was comfortable scoring inside as he looked to power his way to baskets instead of taking a weak fade away jump shot.  Diallo rebounded with authority at both ends and changed or blocked numerous shots.

The leader offensively for the Sons was 6’9 Kuany Kuany.  Despite his size, he is a perimeter player all the way as he is rail thin but fundamentally skilled.  Kuany doesn’t shy away from taking the ball strong to the basket into traffic.  He also has a nice shooting touch out to the three point line.  Kuany is also very active on the defensive end where he uses his length to his advantage, whether switching out on ball screens or covering a lot of space quickly when passes come into his area.

Achor Achor, a 6’9 insider, generally gets little notice for the Sons.  However, against the Fusion, he made an impact at both ends as a rebounder.  Offensively, he surprised when he connected on a three and looked good doing so.

Of the Gold Division games we watched, Team United was the only team not to make the Championship bracket.  They lost a close one to Phenom University in their first game of pool play and both Patrick Williams, a 6’8 forward, and Cartier Jernigan, a 6’2 guard were impressive.

Williams is a skilled athlete that scored from all three levels in the game.  He also made some nice passes on the move, rebounded well at both ends, and showed that he can defend perimeter or post players.  He’s a high major prospect that should find success playing either forward spot in college.

Jernigan found his shooting stroke late in the contest and almost led Team United to an early win.  He impressed with his ability to go one-on-one and score off the dribble from fifteen to eighteen feet.  Jernigan played both guard spots during the game but when he is free to score he makes much more of an impact on the game.