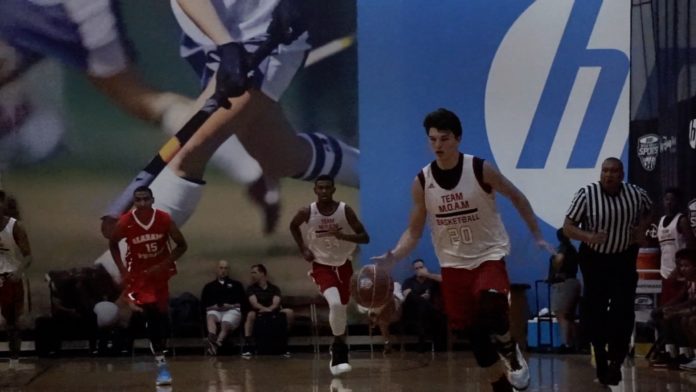 We did not spend our entire time at the ESPN Wide World of Sports Complex taking in only the 17U Gold division of the AAU Super Showcase.  There was plenty of talent playing in, and plenty of college coaches watching, the “regular” 17U division.

Due to a narrow loss in Pool Play, Team MOAM finished second and ended up in the Silver bracket.  Team MOAM steamrolled through the competition to win that championship.  It would have been very interesting to have seen this squad out of Central Florida take on some of the teams in the Gold division.

Kaleb Coleman, a 6’5 wing proved to be both productive and versatile throughout the event.  He can take smaller players inside and post them up or pull bigger players away from the lane and get past them with the dribble.  Coleman shot the ball well off the catch from behind the three point line.  His ability to grab a rebound and push the ball on his own only adds to his value.

Hunter Cattoor, a 6’2 combo guard, continued his stellar play in July for MOAM.  Whether running the offense or playing off the ball, Cattoor found ways to contribute.  A good passer on the move, he routinely found teammates for easy shots.  Cattoor took care of the basketball, shot well from the perimeter, and was active defensively.

Wing Nathan Louis plays bigger than his listed 6’4.  His generous wing span makes him a factor on the glass as well as a versatile defender.  Offensively he is at his best in transition or when cutting into the lane.  He shoots the ball well from eighteen feet and in, scores well at the basket after one or two dribbles from the perimeter, and gets a lot of put backs.

Also playing well on the perimeter was 6’2 Emmanuel Adedoyin.  He shot the ball adequately from outside the arc but he was most effective slashing his way to the basket.  He has an affinity for completing difficult plays in traffic.  Adedoyin is quite quick on the defensive end and gets his active hands on a lot of lazy and wayward passes.

Standing a solid 6’10, Max Fieldler provided a potent lane presence for MOAM.  While maybe not a great run/jump athlete, he moves up and down the floor well in transition and controls his rebounding area on defense.  Fieldler is a good passer from both posts and routinely found cutters for buckets.  He has some basic post moves (drop step, jump hook) and generally scores or goes to the foul line if not doubled inside.

Dante Love, a 6’1 guard, performed admirably at the point guard spot.  He didn’t force things with the basketball, looked to get and keep his teammates involved, and scored when the opportunity presented itself.  He wasn’t fazed by full-court pressure late in the contest we watched and was surprisingly quick to long rebounds and loose balls.

Helping out on the interior was 6’4 forward Marlon Allen.  Strong and a good athlete, he was more than able to hold his own against bigger players on the glass and at the defensive end.  Not known for his offense, he showed he could score with a dribble-drive and later connected on a three, looking good in the process.

Filling in wherever necessary was 6’3 R.J. Rhoden.  His ball-handling and court vision allow him to play the point for short stretches at a time.  More slasher than shooter, he gets to the rim quickly and looks to put defenders on a poster.  Long arms and quick feet make him a disruptive defender in both half and full court defensive schemes.

We came away impressed the quality level of play by the Florida Elite squad.  A bevy of college coaches from all levels attended their games.

Linton Brown, a 6’5 wing out of Wellington, is a gifted scorer.  He’s difficult to keep from the basket, scores well with either hand once there, and doesn’t let contact faze him.  Brown is also a reliable shooter out to the three point line.  He rebounds and defends well thanks to a solid body and long arms.

A pleasant surprise was the play of 6’9 Shane Hunter.  He’s improved quite a bit since we last saw him.  Hunter scored the ball well inside but he now seems more comfortable on the perimeter with the ball in his hands.  Every effective from the high post and short corners, he can face up and knock shots if the defense plays off or score after a couple of dribbles if defenders get too close.  Hunter has also gotten stronger, allowing to be a more effective rebounder at both ends.

Shooting the ball quite well from the perimeter was 6’4 Leonard Ricca.  He was 5-7 from behind the three point line in the game we saw and the Florida Elite coach staff stated that his shooting performance was the norm for him.  Ricca did more than just catch and shoot; he got to the offensive glass and was active on the defensive end off the ball.

Jovan Stulic, a 6’5 wing, put up some good numbers this past high school season.  The lefty has a textbook stroke from the perimeter, is a good passer on the move, and a sneaky offensive rebounder.

Playing an understated but helpful role for the team was Wallace Chester, a 6’7 forward.  Understanding that his role was to play close to the basket, set screens, and rebound, he did his job very well.  Given the opportunity he scored well inside, completing a couple of “and one” opportunities.  Chester was also quick to get the ball out to perimeter shooters for open looks.  He also had no problems playing physical defense in the post.

After missing all of last high school season with a knee injury, it was good to see 5’10 Terry Ivey back on the court.  He showed little lingering effects from his injury, as he had sufficient quickness to break down the defense with the dribble, get into the lane, and score or pass out for open shots.

We hadn’t seen B4L since the spring and they added a couple of guys for the Showcase that we were glad to get a look at.

One of those guys was 6’3 guard Avery Brookes.  It was his first event with the team and at the beginning of the contest we watched he seemed, not tentative, but definitely deferring to his teammates.  As the game wore on, he seemed more comfortable and began scoring well on drives, offensive rebounds, and in transition.  He didn’t take a jump shot in the game we saw, but he has textbook form on his free throw so our guess is he takes and makes open shots from the perimeter.

Another “newbie” for the team was 6’1 guard Max Demeus.  The lefty did a nice job of controlling tempo on the offensive end.  For the most part he made good decisions on the move, scoring when given an opening but getting the ball to open shooters when no opening was available.  Demeus was also a very active and aggressive on-ball defender in the game we watched.

Though he didn’t shoot the ball as well from beyond the arc as we’ve seen in the past, 6’5 Ben Lubarsky more than made up for it in other ways.  He rebounded the ball well at both ends, found teammates for scores in transition as well as on cuts into the lane, and attacked the basket with the dribble more aggressively than we’ve seen in the past.

Playing up a year for B4L was 6’7 Giancarlo Rosado.  While maybe not a top shelf athlete (yet), he has a big frame and knows how to use it.  Rosado is a good passer out of both posts, has a soft touch with either hand around the basket and makes shots out to fifteen feet.  He also is a big target in the middle of the press break and quickly rotates the ball to alleviate pressure.

The Magic won the its pool and made it into the top bracket for first place pool finishers.

They had a to complete a come-back win in their last game of pool play to do so but thanks to 5’9 guard G’shaun Aldridge, the Magic did just that.  Using his speed and quickness in conjunction with his ball-handling, Aldridge repeatedly got into the lane and either scored, earned a trip to the free throw line, or got the ball to an open teammate for a score.

Also stepping up big in crunch time was 6’4 wing Denzel Wiggins.  He came up with a couple of blocks and key rebounds to help the Magic stay in the game.  Offensively he made a couple of perimeter jumpers but was most effective attacking the basket or putting back missed shots.

Keenan Blackshear, a 6’6 guard, is one of the more versatile players in the 2019 Class.  He plays a lot of point guard and he is effective thanks to good court vision and solid ball-handling skills.  His jump shot from three point range continues to improve but his best offensive work comes when driving to the basket.  He has good body control and usually finishes difficult shots in traffic.

With a solid drive game, 6’1 Jordan Clark frequently got into the lane of offense.  Because of this, Clark spent a lot of time at the foul line where he connected at a high rate.  While he didn’t take a jumper in the game we watched, Clark proved to be a steady ball-handler and passer.  He also puts a lot of pressure on opponents when guarding the basketball.

At 6’9 with length, Deatrick Pushell is an intriguing if little known prospect.  He surprised when he connected on a pair of mid-range jumpers and he was very active on the offensive glass.  Pushell has a solid frame and good athleticism.  His best basketball is ahead of him.