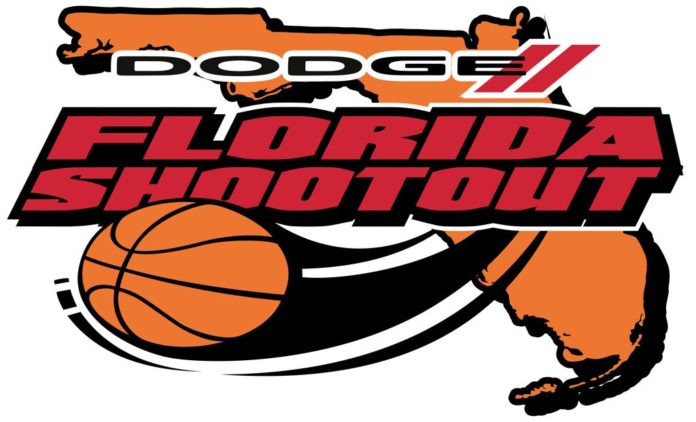 Without question, the player with the greatest potential at the event was Jemal Davis, a 6’8 senior forward from Okeechobee.  Davis was the tallest, longest, and bounciest player at the Dodge and was quickly noticed by the bevy of coaches in attendance.  He gets a lot done in transition and in the lane thanks to his physical gifts.  Davis showed some offensive potential in terms of perimeter shooting and ball-handling but to make a move full time to the wing will require upgrading those skills.  Defensively he has the wing span and lateral quickness to step out and defend smaller players in ball-screen situations.  At a lean 175lbs, Davis needs to add size and strength to his frame to maximize his impact at the next level.

During the five-on-five sessions, all eyes were glued to 6’0 sophomore Jonathan Renois out of Somerset Prep in Pembrooke Pines.  He consistently got into the lane on offense and made good things happen for his team.  Renois had some pretty sweet moves and finishes coming off ball-screens, in particular a behind-the-back dribble to split the defenders and finishing with a finger roll at the rim.  A good athlete with a surprising vertical, Renois plays bigger than his size when going after rebounds or challenging defenders at the basket.  While he made enough perimeter shots to be a threat, his shot lacks rotation and he came away empty a bit too often at the foul line.  While not a crafty or creative ball-handler and distributor, he doesn’t try to do too much and generally made good decisions with the ball on Saturday.

One of the better scorers in attendance was David Graham-Swift, a 6’2 senior at IMG Academy.  Wired to score, he found ways to get the ball in the basket from all three levels.  DGS has a solid frame and knows how to use it to over-power defenders on the way to the basket and score thru contact.  Despite a somewhat low release on his jumper, he gets the shot off quickly and found the target consistently from mid-range and beyond the arc.  A solid ball-handler in the open court and on straight-line drives to the basket, Graham-Swift is more likely score and/or get to the foul line than look for an open teammate.  He did, however, have moments where he delivered passes to open cutters for points. Defensively, DGS has active hands and feet and isn’t afraid to get physical with his opponent.

Another senior from IMG, 6’2 Max Williams, also had his moments.  At a solid 185lbs, Williams is another guard that can power past most defenders.  On Saturday, he did a nice job of using change of direction/change of pace dribbles to attack the basket.  Once the defender is on Williams’ hip, more often than not it was a bucket or a trip to the foul line.  Williams has a text book shooting stroke and he buried a few step-up threes during five-on-five competition.  In general, he took good care of the ball and didn’t make mistakes trying to do too much.  Still, Williams is more of a scoring point guard than a traditional set-up man.

We liked the play of 6’0 sophomore Rodney Bryant out of Mount Dora Christian on Saturday.  He’s quite fast with the ball, and did a good job of pushing the pace in Saturday’s five-on-five action.  If Bryant got ahead of the defense in transition, no one was going to catch up to him.  More than once he was able to grab long rebounds and score, going coast to coast.  He knocked down a couple of threes with good form in our time watching Bryant and defensively he was active and turned some steals into points.  With three more years of high school, he’s one to monitor, especially when it comes to growth in his offensive skill set.

Another sophomore of note was 6’2 Landon Howard out of Evangelical Christian School in Fort Myers.  Seemingly never taking a play off, he always seemed to be around the basketball.  Howard always seemed to be in the mix for a rebound at either end or chasing down 50/50 balls.  He showed some skill as well, draining a pair of threes and completing a couple of drives in traffic during out time watching his team.  He doesn’t yet have a defined position, and that may not be a bad thing.  Keeping his aggressiveness at both ends of the court along with developing into a consistent three-point threat will give him a chance to play at the next level.