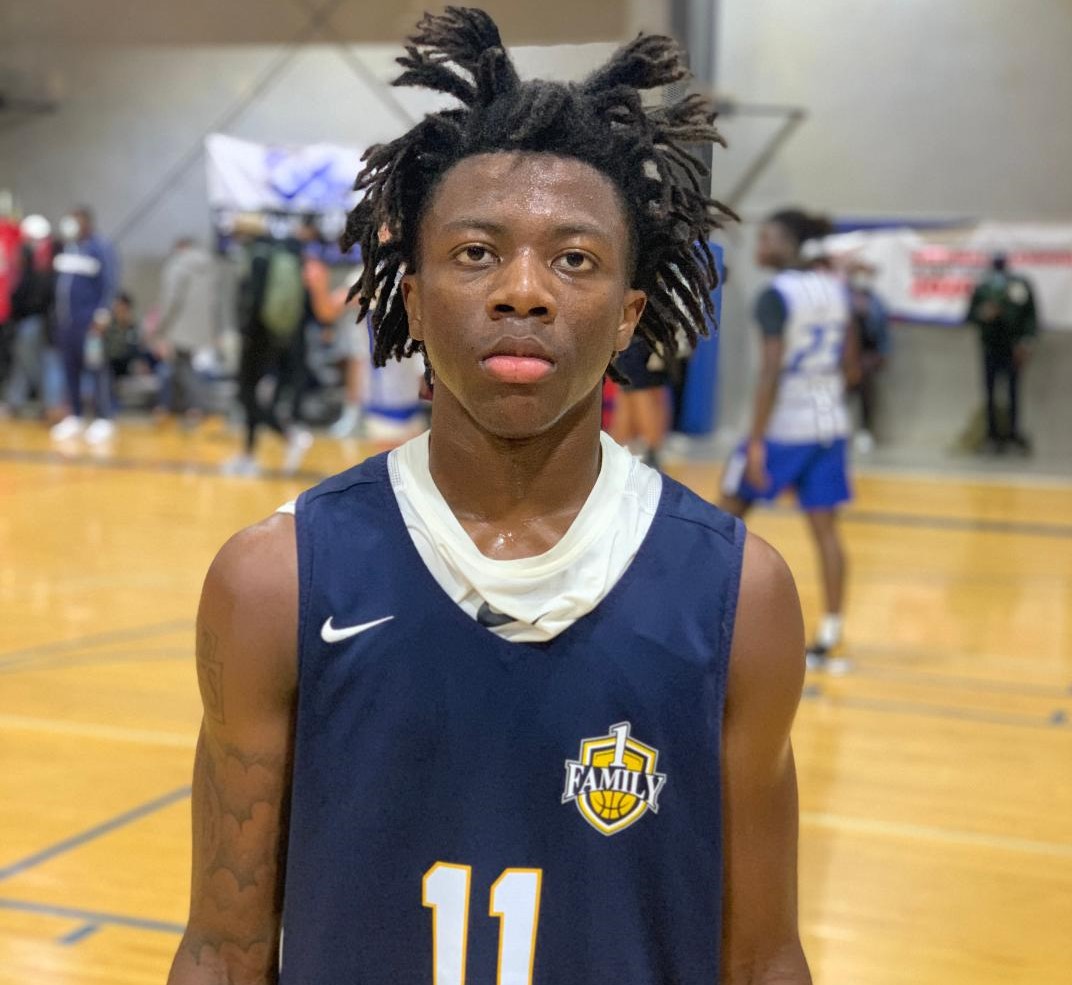 In this report on the Spring Tip-Off, we turn our focus to the 16U division.

Jalen Debose, SE Elite 16U: A 6’4 guard out of Windermere, Debose is becoming much more than a three-point shooting threat.  He has improved his ability to get to and score at the basket in traffic and through contact and is developing scoring tools from the mid-range area.  Debose has a quick first step and uses shot fakes well to get by over-reacting defenders.  As one might expect, he is a very good free throw shooter.  His foot speed and length make him a factor on the defensive end, both when guarding the basketball and in anticipating passes into his general area.

Joel Harrison, 1Family 16U: A 6’0 guard from Carrollwood Day in Tampa, Harrison put the pedal to the metal and didn’t let up on Sunday.  He is very quick and uses that trait to turn steals into scores on the defensive end and to attack the rim on offense.  Harrison’s aggressiveness earned him several trips to the foul line.  For a guy that plays very fast, he takes care of the basketball and makes good decisions on the move.  Harrison didn’t need to unleash any perimeter shots when we saw him so that is an area to check out in the future.

Braylon Jackson, SE Elite 16U: The 6’5 wing out of Tampa Riverview has a knack for putting the ball in the basket.  A multi-level scorer, Jackson has an array of dribbling moves and finishing shots to score over, around, or through most any defense.  He is a good athlete with excellent body control and soft touch in a crowd.  Jackson has some length to him and plays a bit bigger than his size.  He rebounds, runs the floor, and puts in an energetic effort on the defensive end.

Dylan James, 1Family 16U: A 6’9 forward out of The Rock School in Gainesville, James has the look of a hybrid forward that can play both the “3” or the “4”.  Physically, he is a very good athlete with length.  Skill-wise, he can dribble, pass, and shoot with range out to the three point line.  James scores in a variety of ways: transition, lobs, putbacks, catch-and-shoot threes, one or two dribble drives to the rim or a quick pull up in the lane.  He is a bit on the thin side but should add strength as he physically matures.  On the defensive end of the floor, his length allows him to be a good weakside shot blocker and to challenge shots while being able to play for the drive.  The term “upside” was made for guys like James.

Greg Maxwell, 1Family 16U: A 6’1 guard from Gainesville P.K. Yonge, Maxwell was one of the better finds at the Tip-Off.  He impressed with his ability to score on drives, whether getting all the way to the rim, with a floater in the lane, or pulling up for the mid-range jump shot.  There is still work to be done on perimeter shooting from distance, but his shooting form is mechanically sound and consistency should come in time.  Maxwell’s aggressiveness pays off on the defensive end as well.  He guards the basketball voraciously and is quick to disrupt the passing lanes to turn steals into scores or assist on transition baskets to teammates.

Chris Mubiru, Showtime Ballers 16U: A 6’5 wing out of Seffner Armwood, Mubiru was a guy we had heard about and were anxious to see.  He did not disappoint.  A good athlete with length and a solid frame, Mubiru also has a well-rounded skill set.  A good ball-handler and passer, he sees the floor well and gets the ball quickly to where it needs to go.  He was 1-2 from beyond the arc on his only two jump shots in the game we saw.  Mubiru can get to the basket when given the opportunity and is active on the glass, particularly at the offensive end.  His physical traits allow him to be a versatile defender.

Israel Vargas, Showtime Ballers 16U: A 6’1 guard out of Tampa Sumner, a new school in Hillsborough County, Vargas displayed solid scoring and distribution skills.  Both quick and fast with the ball, he pushes the pace and will either score if the defense doesn’t stop him or find teammates for easy baskets if his path to the basket is closed off.  Though he didn’t take many, his jumper looks to be an adequate weapon at this stage of his development.  Where he was most effective was on the defensive end.  His ball pressure created numerous turnovers.  Vargas has active, quick hands and feet as well as being disruptive in the passing lanes.

Bryce Vieux, Showtime Ballers 16U: The 6’3 guard from St. John Paul II in Tallahassee came out firing in the first game of the day.  Vieux knocked down three of four shots from beyond the arc to get his team quickly out of the gate.  Besides his ability to score from downtown, he showed he is capable of putting the ball on the floor and aggressively attacking the basket.  Vieux also is fast down the floor in transition and can finish above the rim.  He rebounds well for his size, especially at the offensive end of the floor.  Defensively he is solid and plays with a great deal of energy.

Tyler Williams, SE Elite 16U: A 6’5 point forward from Winter Haven, Williams seldom looks to score.  When he does, he uses his strength and frame to ward off defenders and muscle his way to the basket.  Williams handles the ball well, has good court vision, and generally makes good decisions with the ball.  He is a grab-and-go rebounder that can start the break on his own and quickly gets the ball up the floor via the dribble or the pass.  His perimeter scoring tools are still a work-in-progress but we have seen improvement sent the end of his high school season.