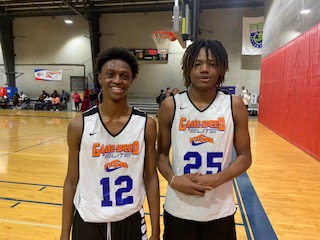 This past weekend Source Hoops held its annual Spring Tip-Off at the Game Point Events Center in Orlando.  This was a great chance for various travel teams to jump start their season and get a good look at themselves and the competition.

In this first report, we are going to highlight those players that caught our attention despite not playing for “high profile” teams.  Call it the “Jason Preston Effect”.  For those of you unaware, Preston went from a non-descript player at Orlando Boone to MAC POY at Ohio in a four year period.  Could any of these guys come close to that?

Zak McGriff, TNBA South Red 16U: The 6’5 sophomore from Orlando Bishop Moore played tough versus an athletic and physical Showtime team.  He was very active and effective on the offensive glass, where McGriff either scored or got to the foul line.  He proved to be a decent interior passer and showed an ability to score inside if not muscled out of position.

Mason Brown, Team Florida 2023: The 6’4 sophomore out of Alachua Santa Fe and his team played up in the 17U division of the event.  Both he and the team acquitted themselves well.  Brown is a very good athlete with a solid frame.  He was tough to stop in transition or when getting past his defender in the half-court.  Brown was one of two from beyond the arc and very active on the defensive end of the floor.

Jammark Hammond, Game Speed Orange 17U: A 6’0 junior from Orlando Wekiva, Hammond had a solid outing for an always gritty Game Speed club.  He consistently made perimeter shots on either side of the arc.  Hammond also got to the basket with the bounce and scored when the opportunity presented itself.  He pushed the pace and got the ball to the right place at the right time.

Joshua Watkins, Game Speed Orange 17U: A 6’6 junior from Bishop McLaughlin in Spring Hill, Watkins is known for being a shooter from deep but in this viewing, he was much more diverse with his offensive game.  He mixed in drives with long-range shot attempts and got more consistent and positive results.  Watkins also proved to be both an athletic finisher and good passer on the break.  Defensively, he is long and disrupts the passing lanes.

Matthew Webster, Game Speed Orange 17U: A 6’8 junior out of Bishop McLaughlin, Webster is long and though not overly physical, does a solid job on the glass and protecting the basket.  He has the ability to stretch the floor with his perimeter shot.  Webster is also a rim runner and will beat defenders down the floor if they don’t sprint back.  His best basketball is ahead of him.

Faheim Meran, Team Main Event Red 17U: A 6’5 junior wing out of Miramar, Meran is a lengthy athlete that simply finds ways to score.  He has a variety of dribble moves to get to the basket and a number of finishing shots to put points on the scoreboard.  Meran shot the ball well from the perimeter in the game we viewed and he provide capable of knocking that shot down off both the catch and the dribble with consistency.  Defensively, he is very active, has long arms, quick hands and feet, and can guard a variety of positions.

Daniel Boyd, Game Speed Blue 17U: A 6’2 junior out of Windermere, Boyd impressed with his ability make a variety of shots this past weekend.  He knocked down open threes, scored on drives, converted three-point plays and snuck in for offensive rebounds.  Boyd put the same effort into defending as he did getting buckets.

Connor Muth, Game Speed Blue 17U: The 7’0 senior out of GA had his final high school season cancelled due to COVID.  One can only imagine how far he could have led his team based on what we saw this past weekend.  Muth showed lots of skill, stepping out to make perimeter shots all the way to the arc as well as score on quick moves in the post.  He rebounds his area and plays physical despite needing additional weight and strength, which should come at the next level.

Drew Carter, CP25 SWFL 16U: A 6’0 sophomore from Port Charlotte Community Christian, Carter plays at a fast pace.  He spots openings in the defense and quickly gets to the basket.  Carter makes good decisions on the move.  He plays with great energy and is very active in the passing lanes on the defensive end of the floor.

Makai Campbell, A2 17U: A 6’2 junior at Orlando Lake Highland Prep, Campbell played effectively both on and off the ball this past weekend.  He scored well driving to the basket, earning and converting several “and one” opportunities.  Campbell also rebounds well for his size.

Mason Sheffield, A2 17U: The 6’4 junior out of Orlando Dr. Phillips is a high-end athlete.  The lefty is a streaky shooter from the perimeter but makes enough that he must be defended out to the arc.  Sheffield finishes at the rim with great body control.  He is also a solid rebounder, ball-handler, and transition finisher.  Defensively he is very active, convers a lot of ground quickly, and is quick to convert steals into scores.

Josh Meo, A2 17U: The 6’4 junior from Orlando Olympia plays much bigger than his size.  Meo was all over the offensive glass with his quick leap and nose for the basketball.  He has very active hands and quick feet on defense.  Meo is a max effort guy that gets that most out of his abilities.

Jalen Cole, TNBA South Black 16U: A 6’3 sophomore heading to Orlando Olympia, Cole proved to be a good athlete and shot the ball well from the perimeter.  He also can put the ball on the floor and score at the basket or pull-up for mid-range shots.  Cole has the ability to play either guard spot.

Dawson Barr, TNBA South Black 16U: The 6’2 sophomore out of Oviedo plays without fear.  He scored well on drives with creative finishes and also moved well without the ball into open areas for shots and scores.  Barr has good mechanics on his shot and makes good decisions with the ball on the move.