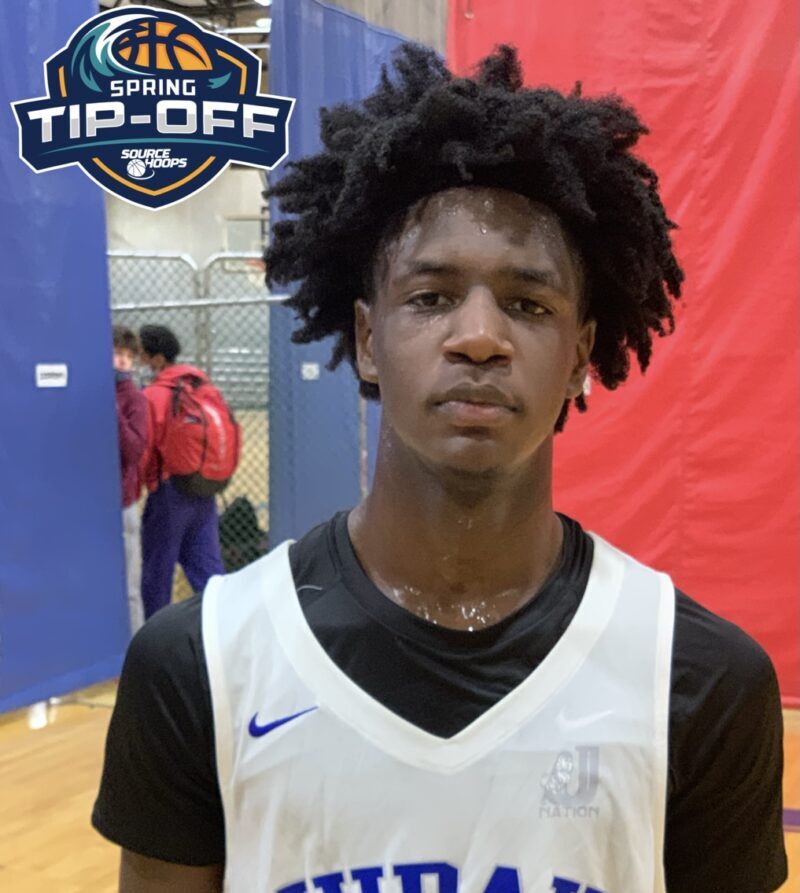 Bartow is coming off back-to-back state titles and despite the loss of all-everything Walter Clayton to graduation, the Yellow Jackets will contend again for the crown.  Kjei Parker, a 6’2 junior guard, averaged 12ppg last season and will most likely push that into the 20ppg category this season.  He is an excellent all-around scorer.  Jaiden Wynn, a 6’6 senior, plays with passion and gets a lot done on the interior at both ends of the court.  He will get help inside from 6’6 junior Eli Englund and 6’7 sophomore Jaelyn Thurman.  Carlos Brown, a 5’10 senior, brings experience to the backcourt.  The rest of the roster is young, but as always, Bartow gets better as the season progresses, and the youngsters will be experienced and ready to go come playoff time.

This team should be very interesting to watch this upcoming season.  The intrigue begins with 6’5 senior Derrick Mitchell.  He plays with great effort and energy, seemingly never taking a play off.  He rebounds, runs the floor, scores on short drives and putbacks and disrupts the passing lanes on the defensive end.  Mitchell continues to improve his perimeter skills and will keep the defense honest from playing him just for the drive.  Tristan Gross, a 6’5 junior, will have the ball in his hands a lot.  He shoots the ball well from the perimeter but also scores creatively at the basket.  Dylan Kramer, a 6’5 junior, is effective around the basket, getting a lot of stick back points as wells scoring on cuts into the lane.  He is an “X-Factor” for St. Pete.  Marquis Curry, a 5’9 junior, pushes the pace on offense and provides ball-smothering defense.  The rest of the squad knows their respective roles and plays it to the best of their abilities.  Don’t be surprised if this squad makes a strong run in their classification.

Taking a cue from the NBA, this group is relying on a “Big Three” to take them on a championship run.  Dylan James, a 6’8 junior, has all kinds of potential for the next level.  With his size and skill level, he is a true inside/outside threat.  James scores off drives, perimeter shots, in transition, and on frequent putback.  Long and athletic, he is a versatile defender.  Isaac Celiscar, a 6’6 sophomore, plays as much at the point as he does off the ball.  His motor always runs at a high level and he is continually in attack mode.  His perimeter shot is satisfactory at this juncture (could be better) but his ability to slash to the basket and finish in a crowd is what sets him apart.  He is another versatile defender.  Jamie Phillips, a 6’4 sophomore, can also be found running the offense at times.  He has a high hoops IQ, doesn’t force the action and will score when called upon.  Tyrese Mayo, a 5’7 sophomore, and Matt Vaughn, a 6’2 junior, are the leaders of the supporting cast.  It’s a young group but they have a high ceiling and a high bar for expectations.

The third team from a very tough district, Lakeland is getting a big boast from some transfers.  Tyler Williams, a 6’5 junior wing, comes over from rival Winter Haven.  He is also a big-time football recruit.  On the basketball court, he plays multiple positions, is a creative passer, improving perimeter shooter, and simply does a little bit of everything to help his team win.  Rolijah Hardy, a 6’2 junior, uses his strong frame to overpower defenders to score at the basket or create room to launch shots from mid-range.  Younger brother Derajah Hardy, a 6’0 sophomore, is more sniper than slasher.  His range is well past the arc but he won’t hesitate to put the ball on the floor if over-played.  Juniors Philip Philogene and Kale Elmhorst will need to be active inside and battle for every rebound as they provide the most size for the Dreadnaughts.  Val Burton, a 6’0 junior and Daidren Zipperer, a 6’1 junior, provide experience in the backcourt.

The Ravens have been a fixture in the regional playoffs the past few years and should make it there again this season.  Trent Scott, a 6’4 senior, is one of the top players in the state, not just the region.  He has a smooth game, scores from all over, creates for others, and is a crafty defender.  He will get support inside from 6’11 junior Cole Gingeleski.  He is the team’s only player with size, so he will have his work cut out for him.  Jacob Tegeler-Hudgins, a 6’2 guard and Kevin Crump, a 6’4 forward, are experienced seniors that should help push the team forward.  Ian Trucker, a 6’4 sophomore, will get plenty of opportunity to expand his role with the team.

The team has an elite level one-two punch in 6’3 junior guard Eddrin Bronson and 6’6 sophomore wing Karter Knox.  Bronson is a deadly outside shooter that also has crafty ball skills to get to and finish at the basket.  Knox is a high-level athlete with three-level scoring ability.  Both are solid on the defensive end as well.  Isaiah Campbell-Finch, a 6’0 freshman, plays beyond his years at the point guard spot.  He makes good decisions with the ball, sets up teammates, understands pace of play, finishes drives to the rim and is a reliable perimeter shooter.  Donnie Morris (6’5 sophomore), Roderick Watson-Pearcey (6’5 senior) and Caleb Gatewood (6’5 sophomore) all provide points and rebounds in spurts at various points in the games we took in.  Karmello Branch, a 6’4 junior, provides TC with another dangerous scorer.  The Crusaders have the look of a team that should have realistic Lakeland expectations.

This isn’t a group with great size but their tenacity and will to win should make them quite successful this coming season.  Leading the way is 6’0 sophomore Daniel MacGregor and his toughness with the ball, vocal leadership, and ability to make and create shots for himself and teammates sets him apart.  Myles Grant is listed as a 6’3 senior but he plays so much bigger on the interior.  Athletic and quick off his feet, Grant is all over the place grabbing rebounds or scoring on quick cuts into the lane.  Dom Sarigumba, a 5’10 junior, keeps defenses honest with this three-point shooting along with some drives to the rim after being overplayed for the shot.  Jordan Lanier, a 6’1 sophomore, brings length, athleticism, and a dangerous outside shot when in the game.  Canaan Burnett, a 6’4 junior, adds some size and outside shooting.  Trevor Parks, a 6’3 senior, is one of the better perimeter shooters in the region, giving CCC another weapon for opponents to contend with.

This is another team that has a dynamic duo leading the way.  C. J. Hawkins, a 6’7 junior, plays with a ferocity that is hard to stop.  It is tough to keep him from the basket and he is now a good enough perimeter shooter that defenses cannot just back off and hope he misses.  George Kimble, a 6’1 junior, is an explosive scorer that can also find teammates for easy baskets.  He excels in the up-tempo environment that Berkeley likes to create.  Keon Keeley, a 6’7, junior, is a high-level football recruit but he does a good job of patrolling the interior.  Berkeley has a history of peaking come playoff time and with players like Garcia and Hawkins, this year should be no different.

The Kings reached Lakeland last year and have a strong chance to return again thanks to the return of three starters as well as three talented players from Puerto Rico.  Jaylen White, a 6’1 senior, averaged nearly 18ppg last season.  He will be flanked by 6’0 senior Josh Rogosich and 6’0 junior Yadniel Sanabria, both of whom averaged at or near 10 ppg last season.  The transfers bring needed size as 6’5 junior Eiram Cuevas, 6’6 junior Will Gonzalez, and 6’5 senior Sebastian Morales.  Darren Roberts, a 6’0 senior, adds additional scoring power for the Kings.

As has been the case for the last few seasons, FBA and SWFL Christian will battle it out for district and regional supremacy.  With only three seniors on last year’s region semi-final team, FBA feels like it is their time to take the next step.  Olsen Henry, a 6’4 junior, averaged a double-double last season.  Bennet Mather, a 5’11 senior, and Elijay Stewart, a 5’9 senior, should get plenty of opportunity to raise their scoring averages into the teens.  Zacharie Garcon, a 6’4 junior, provides help on the interior.

Trent Scott, Tampa Alonso: The 6’4 senior was impressive each time we saw him in the spring and summer.  He’s smooth, players under control, scores from all three levels and can create for his teammates.  Scott is also a sneaky defender that lies in wait in the passing lanes and quickly converts skills into scores.

C.J. Hawkins, Tampa Berkeley Prep: The 6’6 senior is also a grid-iron star and that is the sport he will play in college.  Still, on the hardwood, he is highly productive, attacking the basket with a vengeance, pounding the glass at both ends of the floor and pushing the ball in transition after grabbing a defensive miss.  Hawkins has worked very hard to develop his perimeter skills over the course of his high school career and is now a truly versatile inside/outside threat.

Derrick Mitchell, St. Petersburg: The 6’5 senior plays like he has been shot out of a canon.  He gives max effort every possession at both ends of the floor.  Offensively, he is an aggressive slasher to the basket that finishes well in a crowd.  Mitchell has also become a dangerous perimeter shooter, which just opens up more driving lanes.  Defensively, he can and will guard any position, and rebounds out of his area.

Dylan James, Winter Haven: The 6’8 junior spent his sophomore season at The Rock School in Gainesville but has since returned home.  A combo forward that can play inside and out, he has a reliable perimeter shot, decent handles, and quick bounce off the floor for boards and blocks.  He is too big for smaller players inside and too quick and skilled for bigger players on the perimeter.

Kjei Parker, Bartow: The 6’2 junior had a solid season as the #2 option after Walter Clayton.  Now, Parker has the target on his back.  He is more than talented and skilled enough to handle it.  He plays under control and never seems to get rattled.  Parker has a nice mid-range, craftily gets to the basket and makes good decisions, and defensively is active and alert for any opportunity to swipe the basketball.

#1 Sophomore: Karter Knox, Tampa Catholic: The third and final Knox brother, Karter, at 6’5, is athletic and a proficient scorer.  He averaged close to 20ppg at the Nike Peach Jam 15U division.  His jumper is reliable to the arc, he has excellent body control to finish in traffic, and has all the tools to be a disruptive defender.

#1 Freshman: Jamier Jones, Sarasota Riverview: At 6’4 with a solid frame, Jones already is a step ahead of most freshmen.  He has a surprising combination of skill and athleticism for a player so young.  He already has a national reputation and when viewed this summer, it is certainly merited.

Senior Sleeper: Tre Chaney, Frostproof: Toiling away in near invisibility, Chaney turned in junior numbers of 16ppg/7rpg/3apg/3spg.  We caught him this summer and he didn’t look out of place playing with and against more well-known players.  Don’t be surprised if he puts up similar numbers in his final season.