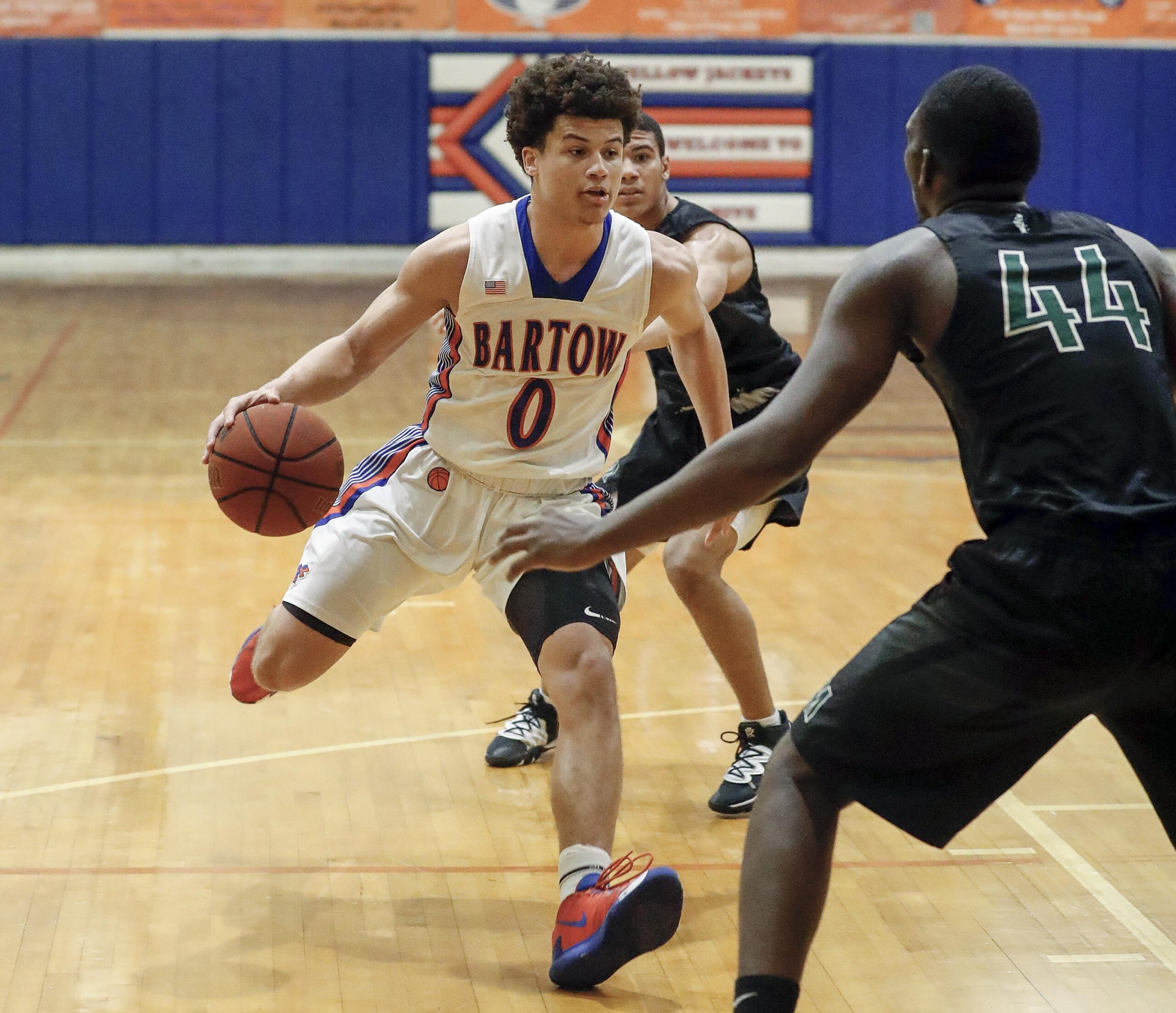 Bartow finished last season as Class 6A state champs and bring most everybody of importance back.  It starts with 6’3 senior point guard Walter Clayton, an Iona commit.  An extension of the coach on the floor, Clayton has a knack for controlling his team and the game.  A playmaker for both his team and himself, Clayton is very productive.  Joining him in the backcourt will be 5’10 senior Malcolm Dewberry and 6’1 sophomore Kjei Parker.  Dewberry comes from Avon Park where he was a double-figure scorer last season.  His speed and quickness are tough to stop.  Parker is a transfer from Kathleen that averaged double-figures as a freshman and has proving this fall to be one of the better players in the 2023 Class.  Add in the likes of 6’2 senior Amarion Frazier and 6’5 junior Jaiden Wynn and Bartow should be buzzing this season.

Naples got hot at the right time last year, going all the way to Lakeland before bowing out in the semi-finals.  The region is not notoriously strong, and it is likely that Naples can repeat last year’s success.  The backcourt of 6’5 senior Tony Green and 5’10 senior Byntly Theork will be provide the fuel that runs Naples.  Green is a scorer, pure and simple.  Whether by jumper or drive, Green finds ways to put the ball into the basket.  Theork pushes the pace for the uptempo Naples attack.  He’s strong and fast, loves to penetrate, and is a dangerous outside shooter.  There is enough athletic talent around the two that Naples should be a solid contender in Class 5A.

For the Tarpons, it starts with 6’8 forward Tre Carroll.  The senior can take smaller players inside to score or pull bigger players away from the basket and either shoot over them or blow by them with the dribble.  He’s committed to Florida Atlantic.  John Gamble, a 6’5 sophomore, is as dynamic an athlete as you will find anywhere.  Still a work-in-progress on the offensive end, Gamble will do one or two things a game that will leave observers speechless.  Look for 6’7 senior Nnamdi Edeoga and 6’5 sophomore Tynan Becker to make an impact.

This team should have one of the better starting fives in the state regardless of class.  Jason Jackson, a 6’3 sophomore point guard, has all kinds of talent and potential.  Curtis Butler, a 6’3 senior by way of Booker and Victory Rock Prep, is a smooth scorer from all three levels.  Jayvien Millien, a 6’7 senior, is very athletic, rebounds, and runs the floor.  David Mazon, a 6’5 senior, brings the energy at both ends of the court.  John Solomon, a 6’8 senior, returns from a year in Arizona to man the inside.  He showed in the fall that he can be a consistent scorer inside of fifteen feet.

This team will no doubt miss Murray State signee Dionte Blanche after he led them to Lakeland last year.  But fear not, as East Lake has proven at different fall events that they are still a force to be reckoned with.  Dean Gabrelcik, a 6’4 senior, is considered one of the better shooters in the state.  He can get his shot off via the catch or the dribble very quickly.  Anthony Bittar, a 6’4 senior and 6’0 senior Mikey Shane are both accomplished marksmen as well.  Those three will be able to spread out the defense to open driving lanes for teammates and each other.  Henry Hurst, a 6’0 sophomore, was impressive at different fall events.  He will contribute a great deal as well.  There isn’t great size on this team but the power of the three-ball cannot be over-looked.

Last year’s senior-dominated team finished the regular season at the top of the FHSAA power rankings but fell to eventual state champ St. Andrew’s in the regional round.  While the roster has been revamped, the talent level is still solid.  Alvin Tumblin, a 6’6 senior, comes over from Sebring.  He is a double-double waiting to happen.  Harvey Wilson, a 6’6 sophomore, has some rough edges to smooth out but he’s athletic and plays hard.  The rest of the supporting cast is competent enough to keep Santa Fe in the mix for a run to Lakeland.

What a difference a year makes.  Last year McLaughlin won just two games.  A new coach and influx of talent definitely changes the outlook for this year.  Emmanuel Sharp, a 6’4 junior, led the state in scoring last year while at Tampa Blake.  He is a top one hundred player in the national 2022 Class.  Joining him in that status is 6’7 junior Dillon Mitchell.  A transfer from Sickles, Mitchell doesn’t have to score to be effective.  He is an excellent passer, rebounder and multi-positional defender.  6’2 Anthony Davis also comes over from Blake and provides a great compliment to Sharp and Mitchell.  Davis gets to the basket quickly and is a steady and efficient rebounder at both ends of the floor.  McLaughlin should be one of the more exciting, if not successful, teams in the Tampa Bay area.

Bayshore Christian found its way to Lakeland last year and has a chance to do so again in 20-21.  C.J. Crews, a 6’2 senior, is a dynamic lefty scorer.  He prefers scoring from the perimeter but will put the ball on the floor and drive it if that is what the defense gives him.  Deon Brown, a 6’1 senior, has the ability to go off for 20+ points on any given night.  He has a quick first step to the basket but also an accurate perimeter jumper.  The rest of the squad will take their cues from Brown and Crews.

This is another team that has a dynamic duo leading the way.  C. J. Hawkins, a 6’7 junior, plays with a ferocity that is hard to stop.  It is tough to keep him from the basket and he is now a good enough perimeter shooter that defenses can not just back off and hope he misses.  R.J. Garcia, a 6’1 senior, is a steady hand at running the club and a point guard that can push the pace and find teammates for easy shots.  Berkeley has a history of peaking come playoff time and with players like Garcia and Hawkins, this year should be no different.

Thanks to football, the Carrollwood Day basketball program should get a major boost.  Mike Trigg, a 6’3 senior and Southern Cal football prospect, is also a gifted basketball player.  He can score in a variety of ways as well as get others involved.  Tony Livingston, a 6’6 junior and another highly touted gridiron star, returns to Carrollwood where he made an impact as a freshman just two years ago.  Livingston has the size and strength to pound it out inside but also the footwork and skill to score from the perimeter.  If their teammates can fill some gaps and make some shots, Carrollwood will make some noise in a tough district.

Tre Carroll, Punta Gorda Charlotte: Carroll played very well this spring and summer in the Team Parsons CP25 series of events.  He is more athletic than given credit for and more than held his own against other D-I quality opponents.  Carroll has a high basketball IQ, can rebound and lead the transition game, score inside and out, and is a good decisions maker on the move. He has signed with Florida Atlantic.

Walter Clayton, Bartow: Arguably the top point guard in Florida’s senior class, Clayton fills the stat sheet.  He shoots the ball well from the perimeter as well as get to and score at the basket.  Clayton is solid with the ball under pressure and does a good job of finding teammates for easy shots.  A good athlete, he rebounds well for a player his size and defensively he has quick hands and feet, as well as the ability to anticipate where the ball is going.

Dean Gabrelcik, Tarpon Springs East Lake: One of the best shooters we saw all off-season, Gabrelcik can light up the scoreboard from deep.  He has a quick release and needs little space or time to get off his shot.  Gabrelcik has also proven to be a solid athlete that helps out on the boards and covers a lot of ground defensively.  He has the ability to finish creatively at the rim when taking the ball to the basket.

Emmanuel Sharp, Spring Hill Bishop McLaughlin:  Hopefully, Sharp will have recovered in time from a broken hand to start the season.  A terrific outside shooter with great range, he must be guarded once he crosses half-court.  Sharp is also crafty with the basketball and finds creative ways to the get to the basket and finish through contact in traffic.  A better passer than he is given credit for, Sharp will gladly give the ball up to teammates for an easier shot.

Michael Trigg, Tampa Carrollwood Day: Hopefully, Trigg won’t be convinced to enroll early at Southern Cal.  He would have easily been a mid-major or better recruit if he stuck to just basketball.  Strongly built, he is tough to stop once he decides to head for the hoop.  Trigg also has a reliable jumper from distance so he gives the defense fits one way or another.  Defensively he can play bigger than his size because of his strength and athleticism.

#1 Sophomore: Jason Jackson, Sarasota Riverview: Ever since viewing him at a couple of events right after last season ending, Jackson has been must-see hoops.  Very athletic, he is a dynamic finisher, whether in transition or in a half-court set.  The 6’3 guard doesn’t need a ball-screen to get past defenders and into the lane.  Yeah, we wish his perimeter jumper was more consistent and that his defense on the ball was a bit more intense but that is really nitpicking.  Jackson is a high-major talent that just needs to put it all together.

#1 Freshman: Karter Knox, Tampa Catholic: At 6’4 with a solid frame, Knox already is a step ahead of most freshmen.  He also comes from an athletic family and has two older brothers that were D-I recruits.  Rather than shying away from expectations, Knox is embracing them.  He will be the alpha-dog on a young Tampa Catholic team. Knox has the competitive spirit and skills to forge his own D-I path.

Senior Sleeper: Caleb Jones, Fort Myers Dunbar: The 6’0 senior caught our attention this summer when he buried six threes in a contest.  He maintained our interest by showing he could score in other ways.  He is quick with good handles, is solid on the defensive end, and is a good decision maker with the ball in his hands.