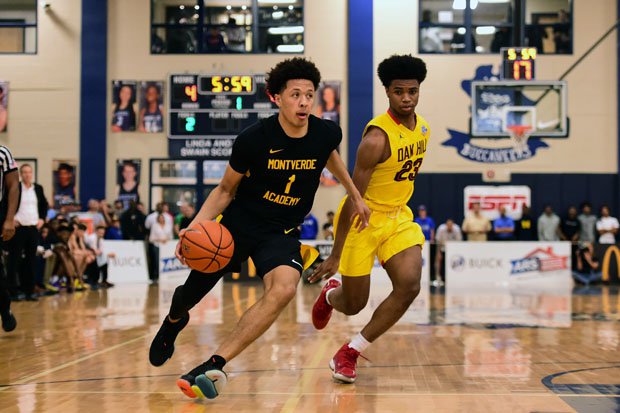 Last season’s GEICO’s semi-final loss to IMG Academy, with a double-digit lead evaporated in the final quarter, will be all the motivation the Eagles will need for the season.  As usual, talent flows out and the end of one season and talent flows in shortly thereafter.  Cade Cunningham proved over the spring (MVP of the EYBL) that he is the top high school player in the country.  Senior Moses Moody also returns and a trio of transfers led by FSU commit Scottie Barnes will this year’s edition of Montverde much like previous versions: talented, well-coached, and one of the top pre-collegiate programs in the nation.

On paper, IMG Academy is just as talented as Montverde and some national polls rank the Ascenders as the pre-season #1 high school team in the country.  Jaden Springer, a Tennessee commit returns while Duke recruits Jalen Johnson and Mark Williams, and wing Matthew Murrell come in to push the talent meter even higher.  Add in young studs like juniors Moussa Diabate and Lynn Kidd, and sophomores  Jarace Walker and Brandon Huntley-Hatfield, and it is a team that will be in line for the top spot in the national polls all season long.  In the SIAA, West Oaks looks to have another outstanding squad.  Led by 6’5 senior and Kansas State signee Selton Miguel, the Flames trot out a group of long and athletic multi-dimensional players.  Seniors Jadrian Tracy and Anderes Staton-McCray can and will play multiple positions while 6’0 junior A.J. Neal while be given the reigns to run the offense.  The Rock School will feature 6’5 senior and Cleveland State signee Alec Oglesby and 6’0 FAMU signee Jalen Spear in one of the best backcourts in the SIAA.  Kyle Duke, a junior, makes his greatest impact at the defensive end.  It isn’t a big squad, with only 6’6 Lenzy Hancock and 6’8 junior Atraiel Washington being the guys with size that should see major minutes, but the squad is poised to have a great season.

The MVP of the EYBL this past spring, Cunningham proved his worth early on with the Eagles last season.  A big point guard, he has great court vision, a super-high basketball IQ, and a skill set that won’t allow him to stay at Oklahoma State long.

It might seem silly to have separate “All-State” teams for the Independents, but a case could be made that the talent pool for both Montverde and IMG is so deep that few, if any, players from other independents would make the team.

As far as the Montverde/IMG contingent goes, that could be a line-up USA Basketball trots out in the Olympics in 2028.  Johnson and Barnes are multi-dimensional, Springer a dynamic scorer and Sharpe simply a monster on the interior.  Both Barnes and Cunningham have been involved with USA Basketball so it isn’t hard to see them standing on the platform hearing the national anthem with gold medals around their necks in less than a decade.

In the SIAA, Rolon is arguably the top point guard and is committed to Florida Gulf Coast.  He gets high marks as a ball-handler and passer but he can score as well.  Spear had a great spring and summer and received several D-I offers by the end of July.  He is a crafty scorer from all three levels.  Miguel is over-powering on the perimeter with his ability to get to the basket and score.  Mbow, a 6’7, is a combo forward that produces both inside and out.  Mayoum has improved his outside shooting to the point that he can’t be played simply for the drive.

VRP has a solid combo in forwards Mohamadou Mbow, a senior, and Prince Mosengo, a sophomore.  Mbow can step out and score on the perimeter while Mosengo has nice footwork and a soft touch around the basket.  Add in junior guard Kevin Miller and senior guard Curtis Butler, and Victory Rock has the pieces in place to compete on a nightly basis.

The 6’3 guard may not have a reliable jumper, but his strength and craftiness with the ball gets him to the rim where he finishes very well.  He may have to be a one-man gang on a rebuilding Oldsmar club, but he has the tools and talent to do so.