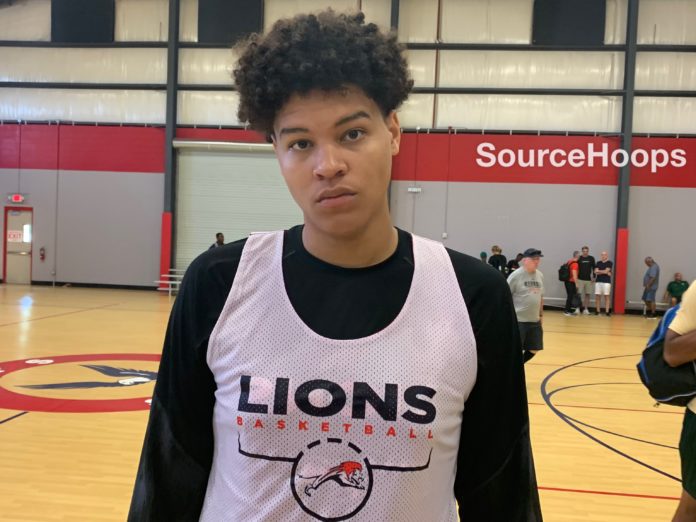 The game becomes much easier if a team has size.  Offensively it can get you easy baskets close to the rim.  On the defensive end, it makes it harder for the other team to score in half-court sets.  With those things in mind, we look at those high school programs that will have formidable frontcourts this coming season.

It is almost an embarrassment of riches in the frontcourt for the Class 2A power Warriors.  Williams transfers in and immediately provides a go-to scorer on the interior.  Not only can he over-power the vast majority of opponents inside, Williams is also skilled enough to move out on the perimeter and with either his jumper or driving ability.  Easley is a bouncy athlete that will provide a lot of help in the rebounding department and on the defensive end.  He’s long, covers ground quickly, and anticipates well.  Offensively, he will make the most of his opportunities on lobs, putbacks, and in transition.  Allen-Lubin was sensational this past spring and summer on the grassroots circuit.  He will become a full-time wing sooner rather than later, but right now he is a combo forward that can score from the perimeter as well as make plays near the basket.  Hastings is just a freshman but has shown gobs of potential.  For a player his size and age, he’s decently coordinated, runs the floor well, and knows how to use his size at both ends of the floor.

This is a young but oh-so-talented group.  Glenn is already getting national recognition and has spent time this summer and fall with USA Basketball in Colorado Springs.  A double-figure score last year as a freshman, Glenn will no doubt be asked to do as much, if not, more this coming season.  He’s got the skills and attitude to do it.  He plays with passion and energy at both ends of the floor and scores from inside as well as out.  Canonville lives up to his name; he plays like he’s been shot out of a canon.  He’s a superior run/jump athlete and thrives in transition as well as pursuing misses off the offensive glass.  He’s also a tough defender both on the perimeter and inside the paint.  Chenault got some varsity run as an eighth grader last season.  Right now he’s all about potential but his length and leaping ability, combined with his enthusiasm for the game, makes him an impact player for Calvary.

That’s a lot of size for one of the smaller public schools in the state, but after watching the group play earlier this year at the Fall Festival, it’s clear Jackson knows how to use a group of bigs.  West will get a chance to play on the perimeter at the next level but for now he’s the leader of this pack and sets the pace with his attacking mentality on the glass and with the ball out on the perimeter.  Morrow is long and gets off the floor quickly for boards and blocks.  His offensive skills are developing.  Riley showed this summer that he can make shots out to fifteen feet, run the floor, and grab more than his fair share of offensive rebounds.  He is also a physical post defender and protects the paint.  Payne and Herrod showed flashes this spring in limited playing time.  They know if they want to see a reasonable amount of floor time, they will need to play hard, pursue rebounds at both ends, and challenge offensive players that come in the lane.

While only a two-man wrecking crew, TC’s duo provides the team with plenty of punch.  Broome was a revelation this spring and summer playing for Team Florida on the Adidas Gauntlet circuit.  He’s a walking double-double thanks to his soft touch around the rim and ability to dominate his rebounding area.  Elmore may possess the high-level of athleticism Broome lacks but doesn’t have Broome’s consistency.  Elmore scores well facing the basket via either the jumper or the drive and routinely beats defenders down the floor in transition.

Andrews was injured all of last high school season and didn’t really get back on the court until after the spring grassroots period.  He quickly made up for lost time and recently committed to Illinois State.  When a full 100%, Andrews is a big body that moves well, makes an impact as a shot blocker and rim defender, and a guy that can score with power moves inside.  Green is arguably the top player in Central Florida with his ability to create mismatches.  The lefty can space the floor with his jumper, drive to the basket and score in traffic thru contact, and make the right decision with the ball in his hands.