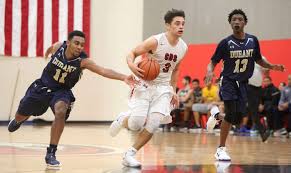 Riverview will be a young team this coming season but they are very talented.  Tyrus Jackson, a 6’4 senior, is expected to be the lone senior in the rotation.  The marquee name is 6’4 junior Malachi Wideman, an athletic and bouncy wing that is garnering national attention.  Juniors Zach Mobley and Marquel Bryant are expected to play major supporting roles.  Additional size comes from sophomores John Solomon (6’8) and Jayven Millien (6’7).  Riverview will be tested early on as they participate in the City of Palms.  Should they meet up with Oakridge out of Orlando in an expected regional semi-final, it will be a very high-flying affair.

Booker took two-time state champion Leesburg to the brink in last year’s 6A state title game, falling by a single point.  Despite losing some quality players from that group, Booker still looks to be one of the top teams in this region and in the 6A classification.  Johnnie Williams IV earned first team all-state last season for his play.  He plays with a motor and athleticism that is hard to match or contain.  Backcourt running mate Jordan Clark, a 6’3 senior, bring great size and IQ to the point guard spot.  Much is expected from 6’4 Curtis Butler after a solid freshman campaign.  Nothing’s a given, but Booker doesn’t look to have an overly difficult path to return to Lakeland.

The Terriers are looking to make a return to Lakeland after last season’s final four appearance.  They have an advantage in the frontcourt with the presence of seniors 6’8 James Pursley, 6’6 Xavion Lockwood, and 6’5 Joshua Gloster.  Christian De Leon, a 5’9 senior, is super quick with the ball and keeps defenses on their heels.  The challenge will be finding enough perimeter scoring to keep defenses from collapsing inside.  There are certainly challenges along the way, most notably from Daytona Beach Mainland.

TC will be young but those youngsters gained a lot of experience last year on the way to the final four in Class 5A.  Juniors Kobe Knox (6’1) and Alijah Harrison (6’4) give Coach Don Dzagwa a potent perimeter combo that can score points as well as defend.  The interior is protected by 6’8 junior Isaiah Elmore.  TC has a solid supporting cast around those three and as always will take on a challenging schedule to prepare them for the playoffs.  It won’t be easy for Tampa Catholic to get back to Lakeland as teams such as West Palm Beach Cardinal Newman, West Palm Beach Oxbridge Academy and Boca Raton St. Andrew’s all have a reasonable shot at knocking off the young Crusaders.

The Dreadnoughts are in a tough district with county foes Bartow, Winter Haven, and Lakeland Kathleen.  After all that, the likes of Windemere, Orlando Edgewater, Melbourne, and Tampa Wharton await as potential regional matchups.  However, it helps to have a talent like 6’8 senior Luke Anderson on your side.  One of the top players in the state and an Iowa State commit, Anderson is equally effective inside and out.  He’ll have a lot of help this season in the form of 6’7 Reese Yothers-Jackson, 6’2 Jay Williams and 6’1 Patrick Taylor.  Lakeland hopes a challenging schedule will have them more than prepared come playoff time.

One of the big surprise teams from last season, Carrollwood Day won the district title for the first time in recent memory and reached the regional semi-finals.  A pair of senior guards, 6’1 Malcolm Whitlow and 6’3 Edgar Zieglar, will attempt to get Carrollwood deeper into the playoffs.  All Whitlow did was pace the FHSAA in scoring at just over 30 ppg, using his outside shooting ability and crafty dribble moves to get to the rim and score.  Zieglar was at his best in catch-and-shoot situations, but over the summer showed an improved ability to put the ball on the floor and score.  If the supporting cast can contribute, expectations will remain high for this club.  District rival Tampa Prep, as well as Oviedo The Master’s Academy and Lakeland Sante Fe Catholic loom as possible challengers for a regional title.

Canterbury reached the Class 3A title game last season thanks largely to the talents of Berrick Jean-Louis, now a freshman at New Mexico State.  However, the top six scorer’s return which should make it easier on the Cougars.  Simon Wilbar, a 6’9 senior with D-I interest, gives the team size inside that most of their opponents won’t have.  Sophomores Alan Cedeno and Chase Garrett contributed a lot as freshman and will have more responsibility place on them this time around.  Canterbury is in a tough district, with the likes of Naples First Baptist, Naples Seacrest Country Day, and neighboring Evangelical Christian all itching to knock off the Cougars.

Santa Fe Catholic’s fortunes will rise and fall with the play of junior guards Jovan Bell (6’4) and Joe Stubbs (6’2).  Both players are exceptional athletes with the ability to put up large scoring quantities, together or on their own, at any given time.  If they can get their teammates to contribute and not stand and watch the athletic feats of Bell and Stubbs, Santa Fe will have a major say in the path to Lakeland in this region.

First Baptist defeated Canterbury in the district finals last season and then lost by only a single point when they hosted the re-match in the regional final.  This group is well-coached and will make life challenging for teams in its region and district.  Preston Urbanic, a 6’2 senior, is a crafty guard that will pace First Baptist.

Head Coach Joe Fenlon has won over 700 games in his career as coach at Tampa Prep and is certainly one of the best to have roamed the sidelines in, not just the Tampa Bay area, but the state as well.  Jaren Phillips, a 6’5 senior, has the talent and skills to take a young Terrapin squad very far.

Luke Anderson, Lakeland: As mentioned earlier, the 6’8 Anderson is a threat both inside and along the perimeter.  He’s an excellent shooter from beyond the arc, scores well around the basket, and has the ability to grab rebounds on the defensive and push the ball ahead on his own in transition.

Darin Green, Tampa Wharton: Green had a tremendous spring and summer, earning several mid-major scholarship offers before committing to the University of Central Florida.  One of the top perimeter shooters in the state, the 6’4 Green has become a real threat off the dribble.  His length and foot speed make him a solid defender.

Malachi Wideman, Sarasota Riverview: The 6’5 Wideman is a bundle of athletic energy and when he goes off, he goes off!  While most of the junior’s damage comes in transition, drives to the basket, or lobs to the rim, his jump shot continues to improve and he now understands he can pretty much rise up over any defender and squeeze off a mid-range jumper.

Jalen White, St. Petersburg Lakewood:  Built like a Mack truck and standing 6’6, White overpowers most high school opponents.  The senior lefty is tough to keep from the basket, whether on drives to the rim or when pursuing offensive rebounds.  He’s also a solid playmaker with the basketball in his hands.  Now, about that jump shot…

Johnnie Williams IV, Sarasota Booker: Williams scores high marks for his energy, effort, and attacking mentality at the offensive end of the floor.  Defensively the 6’4 senior is solid as well as he covers a lot of ground quickly and is very fast to the basketball.  He’s a streaky shooter from beyond the arc but must be respected.

#1 SO: Walter Clayton, Lake Wales: The 6’1 sophomore didn’t take long to establish himself as an on-court leader for Lake Wales.  He scores as well as he distributes, is an active defender, and an extension of the coach on the floor.

#1 FR: Emmanuel Sharp, Tampa Blake: The 6’3 Sharp was just that when we watched him play for Skills Center Elite at the Eighth Grade AAU National Championships this past summer.  He’s fundamentally sound in all phases of the game and should have an impact from Day One at Blake.

Senior Sleeper: Norris Taylor, Sebring: It is no surprise that Sebring has experienced some basketball success since Taylor stepped on campus.  He’s proven capable of playing either guard spot and knows how to get and keep his teammates involved in the flow of the game.