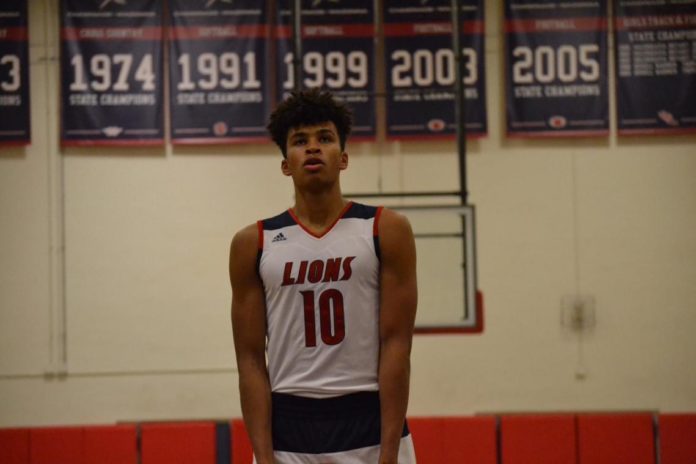 Next up in our spring/summer awards is the Most Surprising Team category.  There could be many reasons that a team falls into this category: their success was unexpected; their overcoming of obstacles; a new team; or maybe the squad just seemed interesting.  In the end, the programs highlighted in this category are ones to pay attention to in the future.

In the team’s second season on the Adidas Gold Gauntlet circuit, Team Knight stepped up in a big way.  Using a system that emphasized players over positions, the squad become a challenging matchup nightmare as the travel season went along.  They finished 7-1 during the April live period and earned a spot in the Adidas Championships in July.  Team Knight didn’t have a significant contributor of consequence that stood taller than 6’7 until 6’9 rising junior Yussif Basa-Ama came on board in July.  Until then, guys like Luke Anderson, Toumani Camara (pictured), and Ahren Freeman played bigger than their size on the defensive end and created mismatches on offense.  Bryan Greenlee’s play at the point guard spot was also a big factor in their success.  The team didn’t score a ton of points during games but their ability to switch everything on defense frustrated opponents and Team Knight was usually able to use one or two big runs triggered by the defense to grab and maintain a lead.

Thunderstuck achieved a great deal of success at the 15U level last year.  However, things didn’t go so well between July 2017 and April 2018 as several players moved over to the Nightrydas Elite program.  Still, Thunderstruck was able to keep things together and became one of the better surprises on the 16U circuit.

6’8 Gervon Dexter out of Lake Wales provided inside muscle at both ends of the court and when Thunderstruck needed a basket, he usually got at least a touch.  The backcourt of Khalil Shaheed and Alec Oglesby provided a solid one-two punch.  Shaheed was a dynamic slasher and finisher at the rim in both transition and in half-court sets.  Oglesby was the sniper from deep that needed very little room to get off his highly accurate shot from behind the three point line.  Jacob Crews, a Class 1A wonder, proved to an athletic and energetic catalyst on both offense and defense.  The rest of the squad was athletic and filled their respective roles well.

If this group stays together, they should be able to challenge the more established shoe-sponsored teams both on and off the court.

As we stated earlier, we didn’t see many 15U teams and the ones we did see didn’t make us sit up and take notice.  However, the E1T1 group in this category had an interesting make-up.  At 6’9, James Repass is an old-school back-to-the-basket post presence with good hands and solid footwork.  He also controls his rebounding area and doesn’t shy away from play physical post defense.  Michael James has become a better-than-anticipated wing scorer over the past year and is starting to get some serious college interest.  The backcourt of Raheem Sanders and Jalen Smith is defensively disruptive.  Hopefully, this group will evolve into the nucleus of an E1T1 Peach Jam Participant in a couple of years.