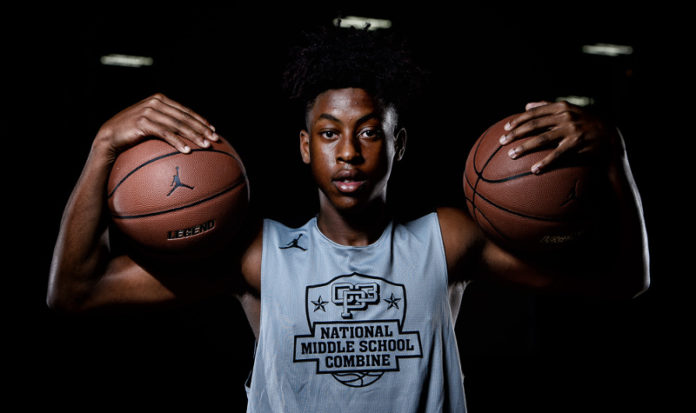 Every year, players elevate their profile due to their play during the spring and summer.  Several players that we saw the past few months have made the jump to that point.  It will be interesting to find out if they are as good as they showed and have the ability to continue at that level or if we just caught them on a good day.

We had not seen Yves Fleuranvil, a 6’7 forward from Royal Palm Beach, until he showed up at the Summer Hoops Festival with South Florida Elite.  We were immediately impressed with his activity and accomplishments when it came to rebounding the ball at both ends of the floor.  Defensively, he showed good instincts when challenging shots in the paint and playing physically in the post without fouling.  Offensively, he’s better right now near the basket than when facing it from the perimeter but he did show some promise with jumpers and short drives from fifteen feet and in.

Guys are usually pretty well beat by the time the last game of the last day of an event rolls around.  However, that didn’t stop Gianfranco Garfolo, a 6’2 guard out of Fleming Island, from making a statement for the Showtime Ballers Select at the Summer Hoops Festival.  He proved capable of playing both backcourt spots with his shooting ability, court vision, and ball-handling skills. Solid but not spectacular athletically, he more than compensates with his savvy understanding of how to play the game.

We had some advance notice of what to expect from Michael Phillips, a 6’7 forward from Creekside near Jacksonville, when he suited up for Each One Teach One at the Summer Hoops Festival.  However, we were blown away by his play and not just from a skills standpoint.  Though not yet a consistent shooter or scorer in a half-court set, Phillips gets more than his fair share of points by converting offensive rebounds, running the floor swiftly in transition, and making the most of his opportunities around the basket.  Defensively he’s very active, rather hedging or switching on ball screens or challenging shots in the lane.  Phillips is also a vocal factor in every contest, encouraging teammates while on the floor or on the bench and giving directions on defense.

Michael James, a 6’5 forward out of Wekiva HS in Orlando, elevated his game greatly this spring and summer.  He went from complimentary scorer to primary point provider for Each One Teach One’s 2021 unit.  With good size, strength, length, and athleticism, James has the potential to be an ideal “swing man”.  He has vastly improved his perimeter shooting over the past year.  Couple that with his ability to swoop to the hoop on the drive and in transition and James becomes a very difficult cover.  He plays bigger than his size both on defense and when rebounding the ball.

Greg Glenn (pictured), a 6’6 forward out of Fort Lauderdale, was a dominant force in leading Nightrydas Elite to the AAU 8th Grade national championship this past July.  Built better than most high school seniors, Glenn has the ability to overpower most players his age.  However, he is not without skills.  His ability to dribble, pass, and shoot out on the perimeter is solid, and no doubt he is already getting looks and offers from colleges at all levels of Division One.