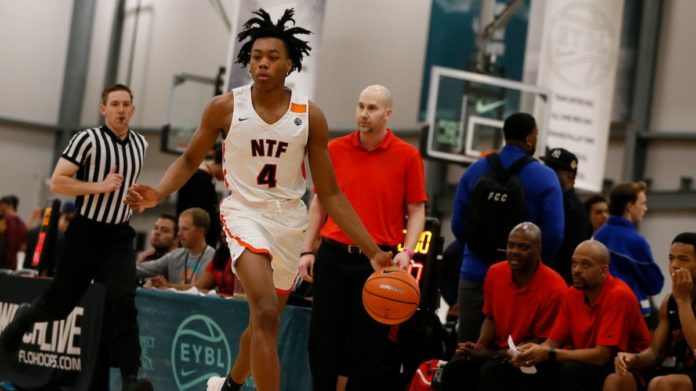 With three shoe-sponsored travel circuits plus countless number of independent teams and events, it is quite difficult to compare teams across the different platforms.  Another challenge is that all too often teams face (or force) roster turnover and a team that might have looked great in April may look mediocre in July and vice versa.  We’ve done our best to wade thru the clutter to come up with the best teams from the spring and summer.

At the end of July, it was just as difficult to select a “best” team as it was at the beginning of April.

In Nike’s EYBL, both Florida-based teams, Nike Team Florida and Each 1 Teach 1, finished the regular sixteen game season at 8-8.  Both squeaked into the Peach Jam and somehow wound up in the same pool.  By all reports, their match-up in Augusta was epic, with Nike Team Florida pulling out the victory.

Over on the Adidas Gauntlet circuit, Team Knight and Team Parsons CP 25 each had winning records in the two “live” period events in April which make up the Gauntlet’s “regular season”.  Team Knight finished with the better record at 7-1.  However, that one loss was to Team Parsons, which would finish at 6-2.  There was hope for a rematch at the AAU Super Showcase, but Team Parsons fell to runner-up All-Ohio Red one round prior to that anticipated game.

Team Breakdown was the only Florida representative in the Under Armor Association this season.  Playing with a talented but young group, they found life difficult in the April “live” period, managing just one win in their eight contests.  The team seemed much improved at the UA Invitational in July, winning three straight games against UAA foes.  Clearly, the Pink and Black will be formidable in the future.

Several independent teams had their moments but none more so than Team MOAM.  The group out of Central Florida was arguably the team with the most on-court accomplishments as they took home championships in the Atlanta Jam in the spring, the Best of the South in the second July live period and the AAU 17U Super Showcase – Silver Bracket in the final live period of July.  While there may not have been a high-major prospect on the roster, it was a team loaded with guys that mid-majors on down would live to sign up for their respective 2019-2020 season.

So, what team gets the nod?  We give it to Nike Team Florida as they did something that only one other team did this spring and summer: defeat Team Takeover, the Peach Jam winner.  After stomping thru the EYBL with a 16-0 regular season record, Team Takeover looked impossible to take down.  NTF won by eleven in a stunner.  While they couldn’t sustain that success the remainder of their time in the Peach Jam, Nike Team Florida showed just what they were capable of when playing against the very best.

For a program in its first year, Nightrydas Elite achieved a lot of success as a 16U program in the EYBL.  The team finished 8-2 and earned a Peach Jam bid in the 16U division.  Led by the likes of Dudley Blackwell, Moussa Diabate, and Dionte Blanch, Nightrydas Elite looks poised to get an opportunity to play on the 17U level in the EYBL next season and make a statement.